Struggling for the Center: Teacher-Centered vs. Learner-Centered Practices in Palestinian Higher Education 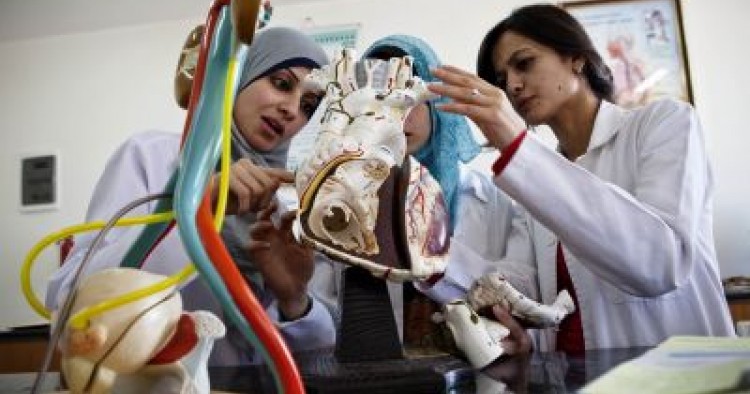 Alongside the struggle for an independent Palestine, not to mention the internal power struggles between the rival Fatah and Hamas movements, another struggle — largely absent from local news headlines and talk on the streets — is unfolding in classrooms in Palestinian higher education. Faculty are pushing back against the hegemony of teacher-centered instruction and embracing, in principle if not in practice, the global movement toward learner-centered pedagogy. This is a radical departure from the legacy of teacher-centered methods inherited from late 19th and 20th century European models of education in the service of state formation, modernization, and the development of human capital.

In poststructuralist education theory, teacher-centered pedagogy is associated with top-down, hierarchal pedagogy and is derided for reinforcing passive learning, rote memorization, and hindering the development of higher level cognitive skills. Not only is teacher-centered pedagogy seen as harmful to the development of critical thinking, but also is associated with authoritarian, anti-democratic regimes that exert centralized control over schooling to produce an obedient, passive citizenry.[1] In contrast, a learner-centered approach positions students to take co-responsibility for their learning and to develop and use critical thinking and collaborative learning. The student participates in a “learning community” characterized by such practices as group work, open discussions, debates, case studies, literature searches, presentations and, in addition to quizzes and tests, the use of self- and peer-assessments, journal entries, and portfolios. The learner-centered paradigm is thus believed to foster cooperative and democratic learning strategies characteristic of progressive education.

Drawing on findings from a recently published study by the West Bank/Gaza offices of America-Mideast Educational and Training Services (Amideast), The National Study of Undergraduate Teaching Practices in Palestine, for which this writer served as co-principal investigator, this paper considers how Palestinian faculty and students are negotiating the struggle to displace teacher-centered practices in higher education. The significance of this struggle is typically framed in neoliberal economic discourse by international donors such as UN agencies, the European Union (EU), the World Bank, and the US Agency for International Development (USAID) in which learner-centered education is the basis for producing a nimble, tech-savvy labor force ready to compete in the market-driven arena of the so-called global knowledge economy. What this paper argues instead is that the real significance of education reform in Palestinian higher education is local, not global. The struggle over the center — teacher-centered versus learner-centered instruction — is about transforming discourses and practices that are shaping emergent properties of a diverse, pluralistic society of a future independent, democratic state in Palestine and for its social, economic, and political development.

Palestinians take enormous pride in the role that their institutions of higher education have played in the struggle to preserve and sustain a strong national identity, to resist occupation, and to produce the human capital vital to social and economic development. In the short span of four decades and in the face of extraordinary obstacles incurred under Israeli military occupation after 1967 — including campus incursions and closures, book and periodical banning, checkpoints, detentions, administrative arrests, deportations, and the suppression of student demonstrations[2] — almost four dozen postsecondary institutions have been founded in Palestine. Funded and sustained largely through private donations and tuition, some 43 educational institutions (11 universities, 13 university colleges, and 19 community colleges) offer nearly 300 educational fields of study across the arts and humanities, the social sciences, and mathematics, science, and technology. In the decade between 1994 and 2005, enrollment in postsecondary education quadrupled from about 30,000 to nearly 140,000, of which over 37% are enrolled in Al Quds Open University. In the same period, the number of faculty and teaching assistants in all universities and colleges grew from 930 to 5,724.[3] And even though women account for only 16% of university teaching staff, nearly all tertiary education in Palestine is coeducational, and females make up 53% of the enrollment.

In short, Palestinian higher education has been at the forefront of national liberation and the struggle for social, economic, and political sovereignty.[4] The idea of the modern university as a social arena giving rise to youth activism is of course nothing new. One has only to think of the role universities played in galvanizing national liberation movements among colonized elites in Asia, Africa, and the Middle East, and its role in shaping political discourse and leadership in postcolonial states, not to mention the turbulent 1960s in which university campuses in the West mobilized anti-war protests and demonstrations for civil rights. Campus activists today — now globally networked — continue to agitate on issues ranging from international human rights and environmentalism, to poverty and globalization.[5] Conceptualizing the university campus as political space thus provides a useful framework for understanding why, in the development of higher education in post-1948 Palestine, learner-centered pedagogy is now on the ascendant. For many of the Palestinian faculty and students in the National Study of Undergraduate Teaching Practices, they see it as a choice between a learning environment structured by an authoritarian transmission of knowledge to passive learners, or one that creates a democratic, participatory space for critical thinking and collaborative problem solving.

Another way to understand this choice is to see Palestinian higher education operating in the context of a stateless society. In other words, university campuses in the West Bank and Gaza fill the critical role as surrogate spaces of civil society, a role that learner-centered pedagogy is particularly well-suited to promoting. This is true even though universities are highly centralized hierarchal institutions where, as described by Abu-Lughod, “the budget, academic priorities, institutional development, and the system in general” are in the hands of a few.[6] As a case in point, each university has a student council with three major components representing student interests: academic affairs and careers, social and cultural affairs, and political affairs. The latter function is so important that student council elections are often seen by the media and political elites as a bellwether of the political mood of young Palestinians and of Palestinian society at large. In student council elections, not only do students run as class representatives, but also as representatives of political interest groups. As Abu Lughod has written, the university campus in Palestine is “an important arena for training in democratic politics. The experience one gains in student politics is transferred to society at large; some members of the Palestinian Legislative Assembly have acquired significant political experience on the Palestinian campus.”[7] In short, not only are the practices of learner-centered classrooms — discussion, debate, collaborative problem solving, and critical thinking — valuable to Palestine’s success in local, regional, and global economies, but they are also ideally suited to the “training for democratic politics” of Palestine’s future leadership.

Paradoxically however, the National Study of Undergraduate Teaching Practices found that learner-centered pedagogy was in fact less salient in actual practice, a finding that is consistent with international assessments of education policies and practices in the Middle East and North Africa since the mid-1990s. According to a major 2008 report published by the World Bank:

there is little evidence of a significant shift away from a traditional model of pedagogy. The main activities in the classrooms in MENA continue to be copying from the blackboard, writing, and listening to the teachers (El-Haichour 2005). Group work, creative thinking, and proactive learning are rare. Frontal teaching—with a teacher addressing the whole class—is still a dominant feature, even in countries that have introduced child-centered pedagogy.[8]

Discussions with faculty and students in focus groups and semi-structured interviews by the National Study of Undergraduate Teaching Practices in Palestine suggest a variety of reasons for the continuing prevalence of teacher-centered practices. One problem is the lack of pre-service and in-service professional development in teaching methodology for newly inducted faculty. The result is that teachers often fall back on teacher-centered practices they internalized from their own experiences in secondary school and undergraduate courses. Moreover, so entrenched is rote memorization that some teachers who have tried to introduce learner-centered methods reported occasionally facing resistance from students who, unaccustomed to engaging critically with course content, found their grades slipping. Another reason is departmental policies mandating the near exclusive use of summative assessments — midterms and final exams — which tend to reinforce rote memorization and passive learning. Finally, economic pressures are a major factor. Chronic budget deficits — a consequence of decades of halting economic growth due to the Occupation — have forced university administrations to cap the hiring of new faculty while boosting student enrollment. The result is overcrowded classes that make learner-centered methods extremely difficult for even the most motivated teacher to utilize. To make matters worse, teachers are often compelled to take on second jobs just to make ends meet. This, in combination with overloaded teaching schedules, makes it increasingly difficult for many teachers to give their students the attention they expect or to engage in professional development activities designed to introduce innovative teaching methods.

The silver lining in this bleak assessment is that the National Study of Undergraduate Teaching Practices in Palestine found that faculty and students, as well as parents, expressed universal dissatisfaction with the status quo. Findings from the study’s random-sample national survey indicated that the gap between the still dominant teacher-centered methods and learner-centered methods is beginning to shrink. Interviews with senior faculty provided the strongest evidence that some teachers, with support from their departments, are pushing back against what they derisively called “traditional” pedagogy. For example, the study conducted a series of in-depth, semi-structured interviews with 11 seasoned professors from eight universities in the West Bank and Gaza. The teachers stated that, for the most part, their department administrations respected their academic freedom to teach as they pleased. Even though a few said they faced initial resistance to some of their unorthodox approaches, for example, by electing not to give exams and use portfolio assessments instead, the positive learning outcomes from these efforts won both the approval and backing of their institutions. Quantitative and qualitative findings from the study also suggest that there is a “changing of the guard” among Palestinian faculty. In the past decade, teachers who, like the 11 professors mentioned above, favor learner-centered pedagogy are those who acquired knowledge, skills, and practical experiences relating to alternative approaches to teaching and learning either prior to or in the first few years of their teaching. Perhaps not coincidentally, some of the strongest advocates of learner-centered approaches appear to be those who completed their post-baccalaureate studies in foreign universities, mainly in the United States and Western Europe, where the shift toward learner-centered pedagogies has been ongoing since the 1980s. These findings highlight the importance of both pre-service and in-service faculty training for incoming teachers.

Institutions of higher education in Palestine, as elsewhere, have not only been a driving force of economic development, but they also play a crucial role in providing a democratizing space that inspires political consciousness and activism among youth and faculty who are critical of the status quo. As arenas for enabling both resistance and national solidarity, and in the absence of a fully developed civil society, Palestinian universities also provide faculty and students with a platform for democratic discourse and practices. It is in this arena that many faculty are pushing back against the hegemony of teacher-centered instruction by transforming their classrooms into spaces of democratic, progressive education.

[8]. The International Bank for Reconstruction and Development, The Road Not Traveled: Education Reform in the Middle East and North Africa (Washington, DC: The World Bank, 2008), p. 88