The Sulaimani Forum: An Inside Look at Iraqi-Kurdish Relations 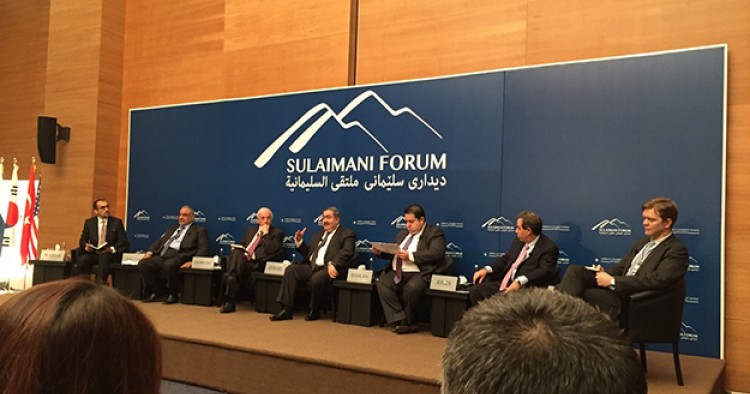 This article draws on a recent special report prepared for Dentons, an international law firm.

The Sulaimani Forum, held March 11-12, provides a snapshot of Iraqi-Kurdish relations and the war against ISIS as Iraqi Prime Minister Haider al-Abadi prepares to visit Washington in mid-April. Hosted by the American University of Iraq, Sulaimani (AUIS), the forum convoked 300 senior Iraqi and Kurdish Regional Government (KRG) officials as well as diplomats and think tank experts from the United States, Europe, and the Middle East.

Iraqi and KRG officials across sectarian and ethnic lines stressed a common theme: the need for Iraqi unity in facing the ISIS challenge. An immediate test is whether the spirit of cooperation embodied in the recent Baghdad-Erbil oil agreement can survive the non-performance of both sides during its first few months. Equally important was what was not said. Officials deflected questions about the role of Iran and the United States in the fight against ISIS. Forum participant General (Rt.) David Petraeus hit the nail on the head when he premised success of “this second chance” on a political deal that would hold.

Forum host Barham Salih, former KRG prime minister and deputy prime minister of Iraq, introduced the theme of unity in his opening remarks, stating that the only way Iraq can confront the challenge of ISIS is for “all parties to work together.” Iraqi Minister of Foreign Affairs Ibrahim al-Jaafari, a Shi‘a who was once prime minister, called for the “unity of all peoples of Iraq.” Sunni Speaker of the Parliament Salim al-Jabouri and former Speaker (now Vice President) Osama al-Nujaifi both stressed not only the need for unity but that the Sunnis themselves must lead the campaign to defeat ISIS. Among the ranking Kurds present, Iraqi Minister of Finance Hoshyar Zebari invoked the same call for unity when Baghdad-Erbil differences arose in the discussions.

A principal difference is over reimbursement for KRG oil exports under the deal that Baghdad and Erbil reached in early December 2014. Iraqi Oil Minister Adil Abdul Mahdi claimed that the KRG had failed to export the required minimum of 550,000 barrels per day (bpd) through the Turkish port of Ceyhan and thus had been reimbursed only $200 million for January and nothing for February. KRG Minister of Natural Resources Ashti Hawrami acknowledged that exports had totaled only 350,000-375,000 bpd, but pointed to provisions in the agreement that state that the 550,000 is a yearly average. He claimed it had been agreed that in the first quarter of 2015, the KRG would export less than the average because of production limitations as well as the KRG’s obligation to repay debts incurred when the Baghdad government in 2014 failed to make its regular budgetary subsidies to the KRG. However, in the remainder of 2015, the KRG would increase its exports to over 600,000 bpd to right the average.

KRG Minister of Finance Rebaz Muhammed Hamlan noted that the lack of federal reimbursement meant that KRG employees, including peshmerga fighters, had not been paid for two months. In an intervention from the audience, legendary peshmerga commander Kaka Hama received a standing ovation when he decried the central government’s payment of civil servant salaries in ISIS-held Mosul at the same time that it has failed to provide funds to pay the salaries of the peshmerga fighters battling ISIS.

Zebari intervened to state that the reason the KRG has not been paid is simple: the central government lacks the funds. He vowed, however, that he will make sure that the KRG receives proper payment, and insisted that the December agreement’s terms would be honored. He described it as a “win-win” agreement for both sides and the foundational document of renewed Baghdad-Erbil cooperation. In a view also voiced by others, he stated that the first job for the partners is to defeat ISIS and then plan for the post-ISIS era.

In the vein of reaffirming unity, Nujaifi and Iraqi National Security Advisor Faleh al-Fayadh stonewalled divisive questions on Iran’s role in the fight and whether the United States should put more “boots on the ground.” Similarly, Fuad Hussein, the chief of staff of KRG President Massoud Barzani, deflected a question as to whether the United States is providing enough support to the KRG. All applauded the progress made so far, particularly the peshmerga’s recent severing of the direct supply routes between Mosul and Syria.

Despite the current “strategic weakening” of ISIS in Iraq, Hussein added that as long as ISIS has the “sectarian depth” provided by Syria, it cannot be defeated in Iraq; it will only spring back in another form. He also argued that it is not a foregone conclusion that the next step after the battle for Tikrit will be an attack on Mosul. He commented that “there are ideas but no plans yet” for assaulting Mosul, and stated that while the peshmerga could be partners in the undertaking, they could not do it alone. He asked rhetorically whether the objective should be Anbar or Ramadi instead.

U.S. Deputy Special Presidential Envoy for the Global Coalition to Counter ISIL Brett McGurk noted that ISIS has in recent months lost about 5,000 square miles, or a quarter of its territory, in Iraq, and asserted that there is no urgency to take Mosul and that it is up to the Iraqis to decide when to do so. The United States is pursuing an “active partnership” in developing the National Guard in Anbar, he said, and assured the audience that “the tide is turning.”

In the near term, much depends on whether the Iraqis and Kurds can deliver on their calls for unity. Can the spirit of cooperation embodied in the agreement survive the obstacles blocking performance on both the KRG and Iraqi sides? Can Kurdish pressure for independence remain subdued? While in some ways the KRG is more independent than ever because of its seizure of Kirkuk and the performance of peshmerga fighters (at a cost of more than a thousand killed in combat), it is at the moment even more apparent that the KRG needs to make common cause with Baghdad against ISIS.

In the longer term, the Iraqis who insisted that Iraq faces not only the question of unity to confront ISIS now but also the question of how to plan for the aftermath have a point. In particular, the Shi‘i militias provide needed military muscle now, but it is a major question, even acknowledged by Foreign Minister Jaafari in his opening remarks, as to how they can be integrated into the Iraqi Security Forces (ISF) later. International dynamics are also at play. While the de facto U.S.-Iranian cooperation currently works to disadvantage ISIS, a reversion to the previous patterns of U.S.-Iranian competition down the pike is easy to imagine.

The apparent Iraqi success in retaking Tikrit is a case in point. Key was the U.S. decision to provide air support to the troops “under the command and control” of the ISF; this led to the disassociation of the Iranian-backed militias from the battle and the departure of Iranian leader Qassim Suleimani from the scene, even though other Popular Mobilization Units remain engaged. This establishes the precedent that the United States will not use its airpower to defend Iranian-backed militias engaged with ISIS.

Of equal significance is the wild card of what will happen in Syria. It is hard to see how either the problems of Syria or Iraq can be settled separately because of what Fuad Hussein called “sectarian depth.” The U.S. strategy of “Iraq first” lacks credibility without a more successful effort in Syria.