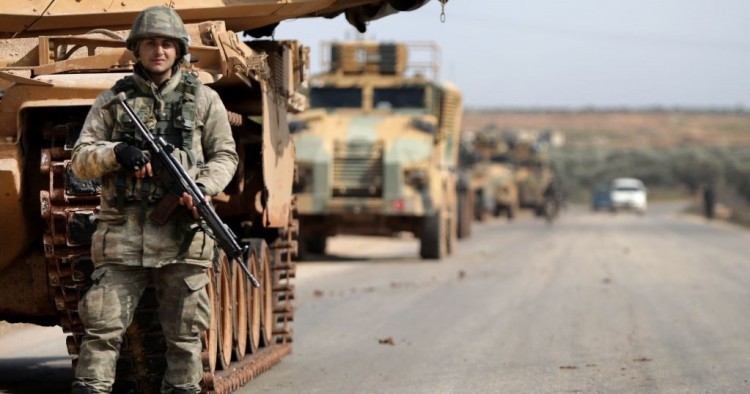 World leaders have long stressed the need to maintain Syria’s territorial integrity, but at the moment, such a goal is unrealistic. Retired U.S. Gen. David Petraeus once likened Syria to “Humpty Dumpty,” saying it might not be possible to put the country “back together” again, as the nursery rhyme suggests. In order to regain its territorial integrity, Syria first needs a transitional phase in which the country will be divided into three zones of foreign influence.

Currently, Syria does not have the basics of a unified country. More than half of the Syrian people are either refugees or internally displaced. Warlords, militias, and thugs rule the streets. The war has created too much hatred between Sunnis and Alawites, Kurds and Arabs. There is no longer trust among the different factions of Syrian society. It is naïve to assume that a negotiated settlement in Geneva will magically be able to convince Syrians to live together again in peace and harmony.

World leaders have come up with a grand proposition that Syrians themselves should be the ones deciding the future of their country. However, this proposition is out of touch with reality, at least for now. The war has destroyed the country’s social fabric and its state institutions. Syria needs to be rebuilt socially, economically, and politically from the bottom up before Syrians can make an informed decision about the future of their country. They need a transition first. If elections were to be held today, who could they elect? A former Ba’athist, a jihadist, or a member of the opposition who has been abroad for years and has no connection with the grassroots on the ground?

To start with, Bashar al-Assad cannot be part of any solution — any viable solution begins with his departure. Even his patrons, the Russians, are realizing this fact. Local settlements that Russia has brokered with the opposition, such as those in Daraa, are breaking down because Assad did not keep his side of the bargain. Recently, Russian media has targeted Assad with a smear campaign. Divisions within the Assad clan are out in the open, with his cousin Rami Makhlouf occasionally posting videos on Facebook accusing him of being “unfair.” These divisions reveal Assad’s vulnerability and his inability to control his camp.

However, the Russians cannot simply let Assad go. As the son of Hafez al-Assad, the founder of the current regime, he is a unifying figure. Warlords fight under his flag, and the fall of this flag would only create more chaos for Russia to manage. Moscow needs to secure an alternative way of preserving its interests in Syria. Finding that alternative has not only been a problem for Russia, but for the other foreign stakeholders as well, which is why we see more of a focus on treating the symptoms of the underlying problem rather than finding a cure. Effort is going toward accommodating refugees in host countries and delivering aid inside Syria. However, those efforts are not conducive to any sustainable solution.

The alternative lies in dividing Syria into three zones of influence. No country by itself can handle the gargantuan task of running Syria, and the U.N. will not be able to send half a million troops to restore order. This is where Turkey, Russia, and the U.S. should work with their local allies to stabilize the country. Turkey has put in place a good plan in the northwest that can be replicated in the two other zones. It is purging terrorist groups such as Hayat Tahrir al-Sham and Hurras al-Din and integrating the different armed opposition groups in the Syrian National Army under the supervision of veteran Gen. Salim Idriss. The Russians can do the same in regime areas. Their most trusted man is Gen. Suheil al-Hassan; although he is part of Assad’s army, he is known to take orders directly from Russia’s Hemeimeem air base. As for the northeast, the U.S. and its Western allies should have the military presence to keep the Kurds in check. They will also guarantee that the Kurds will not face aggression from the Turks. In addition, an agreement should be concluded with the Turks whereby the Kurds of Afrin are protected and Turkish forces leave the area between Tal Abyad and Ras al-Ayn, giving up their project to resettle refugees there. UN forces should be deployed on the borders separating the three zones to ensure that no transgressions occur between them.

Providing security and a pathway to voluntary return

The first step in each zone would be to integrate the armed factions into a cohesive security apparatus that can facilitate the return of refugees and internally displaced persons (IDPs). The security apparatus, operating under foreign supervision, will make sure that refugees and IDPs can go back home without facing any retribution. Their first task will be to ensure a “safe, dignified, and voluntary” return. Turkey, Russia, and the U.S. have an interest in preserving the pre-war social fabric in order to stabilize the country. They differ in this respect from Iran, which has the policy goals of shifting populations in Syria and creating a Shi’a corridor across the country, despite the tensions such a policy might create. The return should be followed by a reconstruction process from which Turkey, Russia, and the U.S. will benefit, and the reconstruction process should be conducted in collaboration with the local councils. Through the local councils, local reconciliation agreements can be conducted, leading to national ones.

At the end of this process, which is likely to take five years, Syrians will be able to make informed decisions about the future of Syria. This transition will create the space for new local political figures to emerge. When the country is rebuilt, civil society is nurtured, and national reconciliation is conducted, free elections can be held. The elected Parliament can then draft a constitution that is inclusive and representative of the true aspirations of the Syrian people. The constitution should come at the end of the bottom-up political process, not at its beginning. At the end of this process, Humpty Dumpty can be put back together again.

Dr. Dania Koleilat Khatib is a scholar affiliated with the Issam Fares Institute for Public Policy and International Affairs at the American University of Beirut. The views expressed in this piece are her own.