The Syrian Brotherhood: On the Sidelines 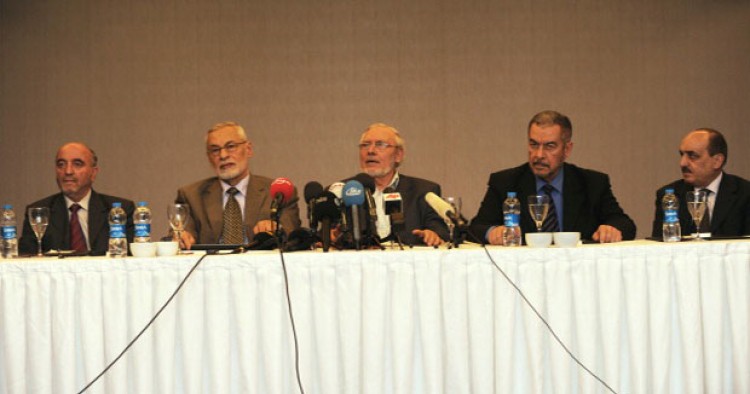 History weighs heavily on any political movement, and the Muslim Brotherhood in Syria is no different. Over eight decades, the group has adapted to survive. This malleability has kept the Brotherhood, or Ikhwan, alive as an independent organization, but historical experiences have changed it in profound ways and are helping to marginalize it during the current crisis.

The first and still central body of the Muslim Brotherhood was founded in Egypt in 1928. Over the following decade Ikhwani ideology spread across the Arab world, and affiliate groups sprang up in several Syrian cities. A national leadership was elected in 1944, but regional chapters often remained under the sway of their original leaders, locally rooted among Sunni ulema and business families. Such regional factionalism continues to afflict the group today.

After Syria’s independence in 1946, the Brotherhood embraced the country’s competitive, if flawed, democratic politics. It commanded significant support within the urban Sunni middle classes, but was nearly absent from the impoverished countryside. In the parliamentary elections of 1949, 1954, and 1961, Ikhwanis took around 20 percent of the vote in Damascus, but averaged a meager 5 percent nationally.

Beginning in 1949, parliamentary life was interrupted by a long series of coups d’état. The Brotherhood adapted poorly to military politics, partly because the rising officer corps was dominated by leftists from rural and minority communities. The Baath Party takeover in 1963 finalized this shift, forcefully displacing Syria’s traditional Sunni urban elites, and along with them the Brotherhood. When Hafez al-Assad took power in 1970 and went on to become Syria’s first non-Sunni president, he was backed by brutal Alawite-led intelligence services, and sectarian polarization escalated.

Squeezed between hardening repression and a radicalized constituency, the Brotherhood began to splinter along regional lines. In 1970, the moderate Damascus leadership was challenged by a more hard-line northern branch, led from Aleppo. A militant offshoot called the Fighting Vanguard then sprouted from the Hama faction and began to assassinate Baathists and Alawites in 1976. The Damascus and Aleppo wings were quickly sucked into the spiraling violence. Brotherhood membership was made a capital offense in 1980, sending a stream of refugees across the borders, and in February 1982 the regime crushed an uprising in Hama by massacring thousands. The Fighting Vanguard was eradicated, while the surviving Brotherhood factions drifted into exile to bicker over who was to blame for their disaster.

Most of the Damascene cadre left the Brotherhood, while the northern rump faction continued to fight internally over who should lead it. During the 1980s, the Egyptian Ikhwan leadership threw its weight behind a moderate Aleppine faction, which years later succeeded in imposing itself on other contenders. But by then the organization was a shadow of its former self, relegated to exile and unable to replenish its ranks. Regional politics were no great help, either. Mainstream Islamist opinion favored the Syrian-Iranian “resistance camp,” seen as the primary backer of Hamas, and most Ikhwanis had little time for their disgraced and dysfunctional Syrian branch.

In 1996, leadership of the Syrian Brotherhood passed to Ali Sadreddin al-Bayanouni, scion of a religious family from Aleppo. To wash away the stain of sectarian bloodshed, he sought to rebrand the Brotherhood as a moderate conservative force. By the mid-2000s, it had clearly endorsed multiparty democracy with minority rights for non-Sunnis, and had somewhat distanced itself from the 1980s violence. Bayanouni pushed the envelope of Ikhwani thought by suggesting that Syrians could legitimately elect a Christian, Alawite, or female president.

Other Brotherhood factions would have had to convince their grassroots constituencies before embarking on a policy shift of that magnitude, but the Syrian wing now consisted entirely of exiles operating in a virtual social vacuum. Bayanouni could focus on strategic messaging and foreign connections, making and breaking pacts as the region’s balance of power shifted.

In 2005, when Assad was weakened by the assassination of Rafik Hariri, the Brotherhood co-founded the Damascus Declaration, a reformist gathering. In the following year, the Brothers shifted their bet to Abdel-Halim Khaddam, a Saudi-backed regime defector. But Khaddam proved a dud, and by early 2009 Bayanouni had reversed course again, now exploiting the Israeli invasion of Gaza to declare a “suspension of opposition activity” in ostensible recognition of Assad’s support for Hamas. The Brotherhood thereby staked its hopes on other regional powers, principally Qatar and Turkey, which favored positive engagement with the Syrian regime. But Assad rebuffed their mediation, and when Bayanouni stepped down in 2010 his Aleppine supporters were trounced in internal elections. A rival faction with roots in Hama took charge, led by Mohammed Riad al-Shaqfa and his powerful deputy, Mohammed Farouk Tayfour.

The start of Syria’s revolution in spring 2011 found the Muslim Brotherhood deeply divided, unwilling to again gamble on regime change, and plagued by the ghosts of the 1980s. The Shaqfa leadership consequently sought to keep a low profile, but a disaffected young guard of the Aleppine Ikhwanis would have none of it. Under the leadership of one Ahmad Ramadan the Brothers founded a spinoff called the National Action Group, which went on to pioneer the creation of the Syrian National Council in September 2011. (The official Brotherhood only joined later, in October.)

Internationally, the events of 2011 amounted to a tectonic shift in favor of the Syrian Ikhwan. Turkey and Qatar broke with Assad. Hamas, too, began to drift out of Assad’s orbit, symbolized by the move of its leader, Khaled Meshal, from Damascus to Doha. Already strong in exile and now riding high on foreign support, the Ikhwan grew into a commanding presence within the Syrian National Council, aided by a hapless secular opposition.

Meanwhile, the factional divides were sidestepped by allowing members to engage with their own home provinces and rebuild old networks using their own relatives and allies. This prevented power struggles but led to a disproportional focus on the Aleppo, Hama, and Idlib regions. In spring 2012, Bayanouni was readmitted to the leadership as one of several deputies to Shaqfa, which resolved some of the internal tension.

However, the generational, social, and geographic disconnect between the Brotherhood’s exiled cadre and the young rebels in rural Syria have served to limit its influence. Ikhwani attempts to co-opt revolutionary groups by offering cash donations made only some headway. Brotherhood members had also provided assistance to armed factions in late 2011, and by mid-2012 the Brotherhood began to create small guerrilla factions of its own. But it wouldn’t admit to having an official armed wing, for fear of again being tainted by sectarian violence.

Within the all-Sunni armed resistance, there was strong support for some form of Islamism, but the Brotherhood failed to reap the benefits. Instead, the armed resistance turned to a sectarian and populist brand of Salafism. The Brotherhood remained aloof from mass politics, and stubbornly held to its moderate Islamist program instead of trying to curry favor with the rising militant and sectarian fringe.

If this was a bet on foreign support, it was a risky one that has not quite paid off. In November 2012, U.S. and Qatari pressure forced a reorganization of the exiled opposition into a new National Coalition, which limited the influence that the Brotherhood had so far enjoyed through the Syrian National Council. Although it had managed to stage a comeback by spring 2013 by having Ikhwan allies elected to key positions, the growing Saudi role in supplying both the armed and the exiled opposition (at Qatar’s expense) soon sidelined the Brotherhood again.

Now, as the Syrian uprising slides deeper into sectarian strife, Salafi radicalism, and warlord rule, the Muslim Brotherhood seems awkwardly stuck on the sidelines, and dependent on lukewarm foreign backers. While some activity has resumed inside Syria, most of the aging Ikhwani cadre remains on the outside, pleading and scheming for foreign intervention in the hope that it may still be brought to power by the grace of, if not God, then the United States.