The Syrian refugee crisis brings Turkey and Hungary closer together 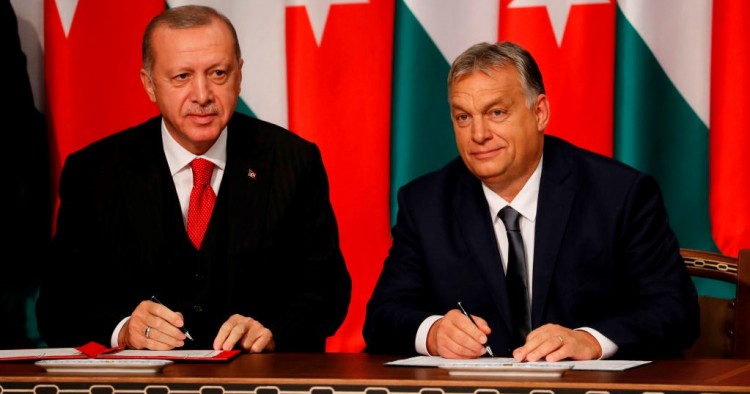 The conflict in Syria is winding down, with the government forces led by President Bashar al-Assad emerging largely triumphant. Facts on the ground in the country have therefore prompted EU officials to address realities shaped by Damascus’ apparent victory. Meanwhile, it remains unclear how the EU will handle the future of Syria’s regime. At the heart of its concerns regarding the crisis is the status of one million Syrian refugees currently residing in Europe. The political dynamics created by their presence continue to play out controversially, making the Syrian conflict a sensitive issue that has become important to vital European security, identity, political, and economic interests.

Moscow and Brussels are at loggerheads with respect to the future of Syria. Russia aims to restore the regime’s relations with as many governments as possible, while soliciting more international support for the reconstruction of the war-torn country. Yet the EU is largely in agreement about the need to continue efforts to isolate Damascus and is reluctant to make any conciliatory gesture that would signal its collective (re)acceptance of the Syrian government to the international diplomatic fold. This is partly for both political and humanitarian reasons. In this vein, it should be noted that the EU provided early support for anti-Assad “moderate” forces, based on the narrative that the president had lost his legitimacy. Meanwhile, Assad has stated that his regime would reject any Western support, emphasizing that Damascus “won’t allow the [West] to be part of [reconstruction], whether they come with money or not … we don’t need the West.”

Very few states within the European bloc have signaled any interest in normalizing diplomatic relations with Syria’s government. One exception, however, is Hungary, which is breaking from the European consensus on the subject and charting its own course. With the right-wing, nationalist, and populist Prime Minister Viktor Orbán at the helm, Budapest is on track to restore diplomatic ties with Damascus. Orbán’s administration believes that normalizing relations with Assad’s government is the most pragmatic approach, as do some right-wing factions in Western European countries such as France, Germany, and Italy, along with like-minded groups in Eastern European states including the Czech Republic.

Orbán’s anti-refugee, Islamophobic, and xenophobic politics have garnered him support in Hungary. Having raised eyebrows among many European officials with rhetoric targeting Syrian and other Middle Eastern/North African refugees in Hungary, Orbán sees the return of Syrian refugees to their home country as serving vital Hungarian and European interests. Within this context, Budapest has taken a unique approach to dealing with Turkey, the only nation geographically separating the EU from the battlefields of Syria.

When Ankara launched Operation Peace Spring against the People’s Protection Units (YPG) in northeast Syria in October 2019, most European governments quickly condemned Turkey’s military campaign. However, Hungary stood out as the EU’s only member to openly support the incursion. As officials in Ankara have explained, one of Operation Peace Spring’s primary objectives was to create a “safe zone” in northern Syria along the Turkish border where roughly two million Syrian refugees (of the 3.6 million in Turkey) will be resettled.

Domestic politics were certainly also part of Ankara’s rationale for launching its third northern Syria operation since August 2016. The extent to which the ruling Justice and Development Party (AKP) suffered losses in the 2019 municipal elections — losing the country’s three biggest cities, Istanbul, Ankara, and Izmir — has made the refugee question increasingly relevant in Turkey’s domestic politics, putting greater pressure on officials in Ankara to push for the establishment of a safe zone in Syria. For the Turks who believe that their government has been forced to spend substantial resources on refugees that otherwise could have gone to its own citizens, the repatriation plan seems essential.

Meanwhile, Hungary, which fears a scenario whereby Turkey floods Europe with refugees, views Ankara’s latest military campaign in Syria as in the EU’s best interest and thus, worthy of European backing. Budapest’s concerns are not without cause. Turkish President Recep Tayyip Erdoğan has repeatedly threatened the EU with “waves of refugees,” which could undermine member states’ security. As Orbán recently put it, “Without Turkey, you cannot stop migration headed for Europe. … As a consequence of this, Hungary is a strategic partner of Turkey in security and migration questions. … We have to do everything to avoid masses of migrants arriving at Hungary’s southern border, and for that we need Turkey’s help.”

Unsurprisingly, Budapest’s support for Ankara’s anti-YPG operation created goodwill between the two capitals, paving the way for Erdoğan’s visit to Hungary in November for the fourth meeting of the Turkey-Hungary High-Level Strategic Cooperation Council. In fact, before Erdoğan came to Budapest on Nov. 7, he personally thanked Hungary’s prime minister for his “support” for Operation Peace Spring at a meeting in Kazakhstan in October. Also notable was Orbán’s participation in Erdoğan’s inauguration ceremony for his second term in office, which came three months prior to the Turkish president’s previous visit to Budapest.

Clearly, Orbán’s relationship with Turkey’s leadership, which makes him Erdoğan’s closest ally in the EU, factors into Hungary’s geopolitical shift to the East. As the Hungarian prime minister has explained, Budapest’s ties with Ankara are part of Hungary’s grander foreign policy, which rests on close ties with both Russia and Turkey at a time when these two countries are on increasingly negative terms with Brussels. Other non-Western states that Orbán’s government has moved closer to include China and some Central Asian republics, such as Kazakhstan and Uzbekistan.

“The Hungarian government appears to perceive Turkey as an emerging, key geopolitical player, not only in Syria but also in southeastern Europe and the broader Middle East,” said Daniel Hegedüs, non-resident fellow for Central Europe at the German Marshall Fund of the United States. Hungary “seems ready to accept significant conflicts within the EU to please Ankara, and acts according to the interests of Turkey and Russia rather than the Western alliances Budapest belongs to,” said Hegedüs.

Europe’s crisis with refugees from Syria and other Middle Eastern countries is not the only factor driving Budapest’s push for a stronger partnership with Ankara. Hungary’s leadership is seeking to achieve its own ends while warming up to Turkey’s government with energy interests in the picture. Hungary’s partially public energy company, MOL, recently purchased a stake in the Baku-Tbilisi-Ceyhan pipeline, which carries oil from Azerbaijan to the Mediterranean via Turkey, and the Hungarians also want to access natural gas via the TurkStream pipeline that provides Russian gas to Turkey. Within this framework, Orbán is hopeful that political support for Ankara will reap rewards for Hungary, which is heavily dependent on Russian gas. Defense requirements also play an important role in Turkish-Hungarian relations, with reports indicating that Hungary is interested in purchasing Turkish-made armored SUVs.

Looking ahead, as Hungary continues to align closely with Russia while deepening its ties with Turkey and other non-Western governments, Budapest’s foreign policy is eroding an EU consensus. In the process, Orbán’s international agenda will continue to be a thorn in the side of other leaders seeking to build unity within the European community aimed at tackling major challenges such as the Syrian refugee crisis and EU-Turkey relations. The Hungarian government’s break from its fellow European states on major transnational issues including Turkey’s military operation in northeast Syria is in no small way an ideological stunt, as some experts have observed.

By embracing Erdoğan, as well as Putin and Assad, while continuing to upset fellow EU members, Orbán’s “eastern bromance” will continue to make Hungary the best European friend of Turkey, Russia, and Syria. What remains to be seen is how Budapest’s maverick foreign policy impacts Hungary’s ties with the rest of the EU, which may consider taking steps to pressure Orbán’s administration into rejoining the European consensus on many of these hot-button issues.

Meanwhile, Erdoğan can be expected to continue fostering Ankara’s relationship with Budapest. This would allow the Turkish leader, who is seemingly irritated by the West’s attitude, to establish a “special relationship” with Hungary that could have important ramifications for the Middle East and the Balkans. This would enable Turkey to increase its influence in an area of Europe that was once under Ottoman rule, and to further put to the test the European consensus on foreign policy and other critical issues, such as immigration.

Giorgio Cafiero is the CEO and founder of Gulf State Analytics, a geopolitical risk consultancy based in Washington, DC. His research interests include geopolitical and security trends in the Arabian Peninsula and the broader Middle East.

Sina Azodi is a PhD candidate in International Affairs at the University of South Florida, and a Foreign Policy Advisor at Gulf State Analytics. His research interests include international security, nuclear non-proliferation, and US-Iranian relations. The views expressed in this article are their own.