Syrians on the move 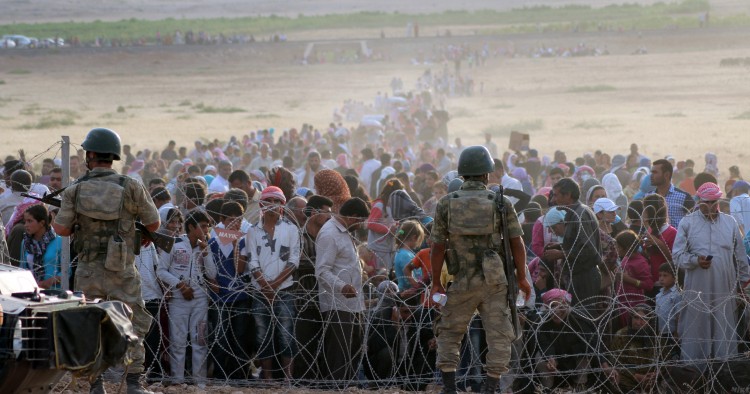 More than half of the Syrian people fled their homes due to the ongoing war. This displacement of around 13 million people is the largest in the world today. Where did they go? Existing resources on the subject focus on one group of people at a single point in time—most often, the refugees. So, I designed this interactive research tool to help you find all the information you need on the whereabouts of Syrians over time. I tried to keep it intuitive, but if you need to do some analysis yourself, you can download the data I pulled together from various sources at the end of this page.

Most Syrians were living in their country

Distribution of Syrians abroad in 2010

In 2010, only 0.9 million people were classified as Syrian migrants by host countries, constituting 4% of the total number of Syrians.

Among them, only 2% (18.5 thousand persons) were registered refugees.

Syrians abroad used to live mainly in the countries shown in this chart.

The 2011 conflict forced millions out of their homes

Number of displaced persons and war casualties over time

As the conflict turned more violent, more people were forcibly displaced. Some left to safer places within Syria (as internally displaced persons), while others fled the country altogether (as refugees and non-refugee migrants).[2] [3] [b]

​As you can see from the chart, although the violence has subsided over the past couple of years, the number of refugees and internally displaced persons remains persistently high. This is mainly due to the absence of a political settlement that enables reconstruction and reconciliation.

A bird's-eye view of the whereabouts of Syrians

Distribution of Syrians within and outside the country over time

As millions fled, and despite the natural increase in population (births minus deaths), the number of Syrians living in their own country fell from 20.7 million in 2010 to 16.7 million in 2017. This decline of 19% is the largest in the world over this period.[1] [c]

Where did those who left the country go?

As the conflict raged, people moved within and outside the country. Many persons were displaced multiple times. There is no data on the transitions of all individuals over time. However, there is data of an acceptable quality to portray what happened in a broad-brush manner.

The refugees were distributed in the following countries over time

Distribution of refugees over time

Most refugees went to neighboring Turkey, Lebanon, and Jordan. See in this interactive map showing which countries took most refugees from 2010 to 2018.[2]

A snapshot of the immigration status of Syrians abroad in 2017

Total migrants vs refugee-migrants in 2017

Not all who fled the country were refugees. In countries that do not accept refugees—such as the Gulf Cooperation Council countries—most Syrians are working migrants with their families. Some Syrians who entered other countries as refugees had their immigration status changed after finding employment or through other means. Note that there are inconsistencies in the definitions of refugees and migrants between countries. The data also has coverage issues.[1] [2] [f]

Transitions of refugees resettled through the UNHCR over time

Between 2010 and April 2020, 151 thousand refugees were resettled through the UNHCR Resettlement Program, a mere 2.3% of the total number of refugees. See in this chart how they transitioned from Syria to the country of asylum and then to the country of resettlement over the years. Note that a few internally displaced persons were resettled directly from Syria without becoming refugees in other countries first.

The majority of refugees remain in Syria's neighboring countries. Some sought asylum in Europe by taking the risk of traveling with people-smugglers, and a tiny majority returned to Syria.[2]

Syrians continue to be the largest forcibly displaced population in the world, with more than 13 million people at the end of 2019. This research tool attempted to portray a clear picture of their whereabouts prior to and during the years of the conflict (2010-2020).

Please contact me if you have any suggestions for improvement.

[a] Note that the number of migrants counts only Syrians living abroad without being citizens of the host countries (dual citizens). Host countries have since naturalized millions of Syrians who left earlier. Also, note that the numbers only include documented migrants. For example, the International Labour Organization estimates that almost 300,000 Syrians used to work in Lebanon's construction and agricultural sectors "prior to the civil strife in Syria", while Lebanon reported zero Syrian migrants to the World Bank in 2010.

​[b] Some sources estimate the number of casualties from the conflict to be higher.

​[d] Some non-refugee migrants may have been refugees before changing their migration status (through finding a job or other means).