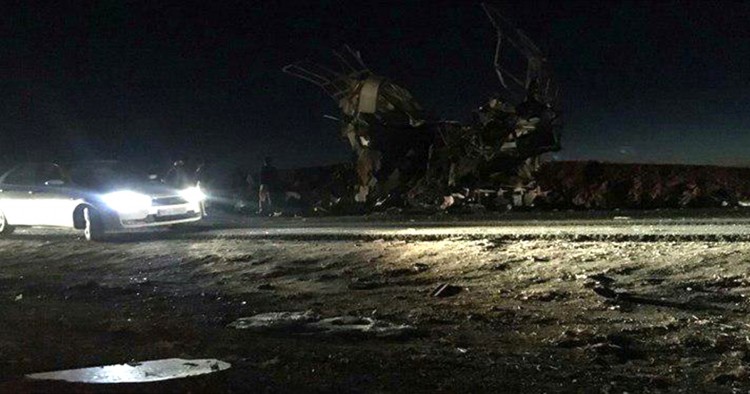 On Feb. 13, a truck bomb hit members of Iran’s Islamic Revolutionary Guards Corps (IRGC) travelling by bus on the Khash-Zahedan road in the southeastern province of Sistan-Baluchistan. A militant group called Jaish al-Adl (Army of Justice, or JA) claimed responsibility for the attack, which came only days after the 40th anniversary of the Iranian revolution, and according to local news outlets, the bombing killed at least 27 members of Iran’s elite force and injured 13.

JA is a Sunni-Baluchi insurgent group founded by Abdul Rahim Mollazehi in 2012. It is considered to be the heir of Jundullah, another militant group that was weakened after the Iranian authorities captured and executed its leader, Abdul Malek Rigi, in 2010. JA operates in Sistan-Baluchistan and claims to fight for justice for Iran’s Sunni Muslims and Baluchis. The group also opposes Iran’s military involvement in Syria, where Tehran and its Shiite proxies have been supporting the Assad regime. Drawing on tribal connections and utilizing the difficult geography and terrain of the border areas with Pakistan and Afghanistan, JA has recently intensified its attacks against Iranian military targets, including IRGC members.

Following the mid-February attack, the IRGC issued a statement acknowledging the death of its members and vowing to take revenge. Iranian officials also rushed to condemn the deaths and, predictably, to blame the attack on foreign powers. Ali Khamenei, Iran’s supreme leader, said the link between the perpetrators “and the spy agencies of certain regional and extra-regional countries is obvious.” Some Iranian officials even drew a connection between the attack and the concurrent Warsaw Summit, which had been convened to discuss Iran’s role and involvement in the region.

Al-Quds Force, an IRGC unit responsible for foreign operations, accused the “U.S., its allies, and Zionism” of shared responsibility for the attack. Iranian President Hassan Rouhani echoed these accusations and vowed to take revenge on those he called the “mercenaries,” while then-Foreign Minister Javad Zarif took to twitter to stress that it is “no coincidence that Iran is hit by terror on the very day that Warsaw circus begins.” The Ministry of Foreign Affairs spokesman, Barham Ghasemi, claimed that terrorist groups were capable of carrying out this operation only with the support of some countries in the region — implying that Saudi Arabia, the United Arab Emirates, or Pakistan may have been involved.

By swiftly blaming foreign powers, Iranian officials aim to deflect attention from the country’s intractable internal problems, such as the persecution of its Sunni minority. This deep-rooted problem has often been overlooked by the international community. Iran’s population of around 80 million includes about 15 million Sunnis, nearly all of whom suffer from discrimination and persecution on both religious and ethnic grounds. The majority of Iran’s Sunnis are non-Persians — mainly Kurds, Baluchis, Turkmen, and a small number of Arabs — who live in areas close to the borders with Turkey, Iraq, Turkmenistan, Afghanistan, Pakistan, and across the Persian Gulf from the Arab Gulf states.

The Iranian government has long followed policies that discriminate, marginalize, and deprive these areas and populations. As a result, these groups are poverty-stricken and the regions where they live are undeveloped. The socio-economic conditions there are far worse than other parts of Iran, even as the whole country strains under the burden of sanctions. It is no coincidence, thus, that Iran’s ethnic and religious minorities are increasingly resorting to violence as a form of resistance.

Last September, Ahvaz, the capital of Khuzestan Province — a region in the southwest that is home to Iran’s Arab minority — witnessed one of the deadliest attacks against the IRGC in a decade. The armed assault on a military parade killed at least 29 people and injured around 60. Attacks against IRGC members in Iran’s Kurdish region have also intensified in recent years, which suggests this is a trend driven by internal unrest rather than foreign meddling.

Although Iranian officials deny these charges and affirm that the Iranian constitution promises to respect all schools of Islam, not only the regime’s Twelver Ja’afari school, the facts say otherwise. Ethno-sectarian discrimination against Sunnis is enshrined in the country’s constitution, laws, and regulations. For example, the Iranian constitution names the Twelver Ja’afari school of Shi’a Islam as the state religion (Article 12). Article 121 affirms this by obliging the president to protect only the official sect. In other words, Iran is a sectarian state by law, and Sunnis have inferior status at best.

Unlike other religious minorities that are officially recognized by the constitution (Article 13), Sunnis are neither recognized as an independent religious minority, nor do they have the rights granted by the constitution to Shi’a of the Twelver Ja’fari school. This puts them in a vague situation where they end up being deprived of the privileges granted to both sides. Furthermore, many other articles of the constitution stipulate and/or imply that key positions in Iran are exclusively for Shi’a, effectively prohibiting millions of Iran’s Sunnis and other non-Shi’a citizens from running for or holding high-level positions in the political system and government institutions, such as the leadership (Articles 5, 107, 109), the presidency (Article 155), the army (Article 144), and the judiciary (Articles 157, 158, 162, 163), among others.

Moreover, several laws and regulations, such as those governing selection, education, and employment, contain provisions and conditions such as “adherence to the principle of absolute Velayat-e Faqih,” the basis of Iran’s system of Islamic governance, that discriminate against non-Shi’a citizens. The end result has been official discrimination against and persecution of Iran’s Sunnis and other minority groups. In its 2017 international religious freedom report, the U.S. State Department said, “Residents of provinces with large Sunni populations, including Kurdistan, Khuzestan, and Sistan and Baluchistan, reported continued repression by judicial authorities and members of the security services, including extrajudicial killings, arbitrary arrest, and torture in detention, as well as discrimination, including suppression of religious rights, lack of basic government services, and inadequate funding for infrastructure projects.”

Many of the regime’s policies toward ethnic minorities precede the Islamic revolution, mirroring the shah’s efforts to force assimilation and Persianize the population. Non-Persian minorities are denied the right to learn in their mother tongue and exercise cultural and religious freedoms. These policies are strictly enforced to secure the supremacy of ethnic Persians and to disadvantage all others, and they have devastating social, religious, and economic implications for Iran’s minority populations.

For example, Sistan-Baluchistan is the poorest and least developed region in the country. It ranks worst in illiteracy among Iran’s 30 provinces, while the unemployment rate is at an all-time high — official outlets claim it is between 35 percent and 40 percent, while others say it exceeds 50 percent — and over 70 percent of its population lives in “absolute poverty.” This grave reality has pushed many Baluchis to become involved in drug trafficking to support their families.

Locals also suffer disproportionately at the hands of the justice system. Baluchis, who make up only about 2 percent of Iran’s population, accounted for at least 20 percent of its executions from 2006 to 2013. Just two years ago, an Iranian official admitted that government authorities executed the entire adult male population of a Baluchi village. The same official expressed no remorse, even predicting that the sons of the executed men will either take up drug trafficking themselves to provide for their families or take up arms to seek revenge.

Government policies have primed the region to become a hotbed of radicalism and separatism. Officials have been warned of the threat, but these warnings seem to have gone unheeded. Instead, the government continues to insist that members of minority communities are mercenaries whose attacks are supported by foreign powers. The Iranian government seems to show no interest in confronting the failures of its policies or bearing responsibility for their outcomes. While this blame game may succeed in deflecting attention from Iran’s internal problems, it is not a sustainable solution. Such policies will only exacerbate matters and will have dire consequences in the long run, both domestically and internationally, heightening tensions between Iran, its neighbors, and the international community.