With tensions rising, are we heading toward conflict in the Gulf? 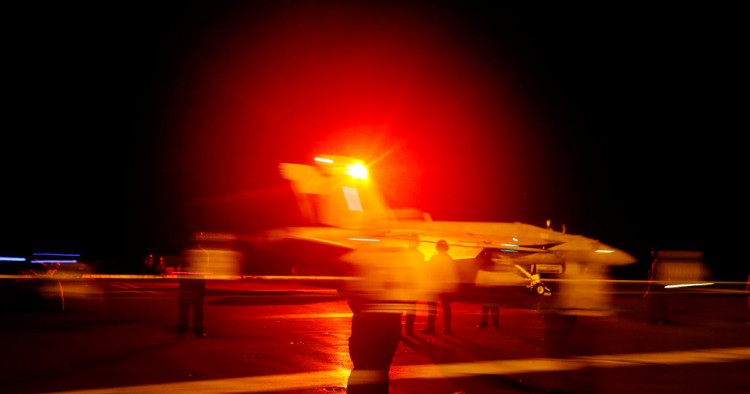 Since the Trump administration refused to extend waivers for Iranian oil exports expiring on May 2nd, the U.S. and Iran have engaged in a cycle of escalating threats and actions. In response to the U.S. move to tighten oil sanctions and push Iranian oil exports “to zero,” Iranian Foreign Minister Javad Zarif used a visit to New York in late April to highlight both publicly and privately Iran’s determination to resist the U.S. pressure and retaliate if pushed to the brink.

Zarif told an audience at the Asia Society, on April 24, that Iran would continue to sell its oil despite the U.S. sanctions and warned that the U.S. “should prepare for the consequences” if it tries to block Iranian sales. Moreover, Zarif alleged that the so-called “B Team” of John Bolton, Benjamin “Bibi” Netanyahu, Mohammed bin Salman (MbS), and Mohammed bin Zayed (MbZ) was trying to “push the U.S. toward disaster” despite President Donald Trump’s campaign pledge to avoid further foreign conflicts.

In private meetings, Zarif stuck to his aggressive public pose. He reiterated his view that President Trump sees the U.S. “maximum pressure” campaign as his leverage to force Iran to return to the negotiating table. But the B Team hard-liners, in Zarif’s estimation, want to corner Trump and use that pressure to provoke a conflict. Zarif vowed that Iran will not accept “being bled to death.” If pushed too far, it will retaliate — first of all against the Saudis and Emiratis, who he believes are overly confident in their own military capabilities. He speculated that a war might start over a “planned accident” that could be blamed on Iran.

Since Zarif’s visit, tensions have been raised even higher. The U.S. has further ratcheted up its maximum pressure on Iran by adding new sanctions on its export of iron, steel, aluminum, and copper. Industrial metals are Iran’s second-largest export earner after oil and gas. And in the last few days, the turmoil has deepened as the region absorbed reports of mysterious sabotage against tankers in Emirati ports, apparent Houthi drone attacks on Saudi oil facilities, and news that the Trump administration is contemplating substantial deployments of U.S. military personnel to the region to deter potential attacks against U.S. interests while ordering hundreds of “non-essential” staff to depart the embassy in Baghdad.

Does all of this saber rattling suggest that the drift toward a conflict with Iran is imminent or irreversible? Probably not. Most importantly, none of the immediate parties to the dispute likely sees an open conflict to be in its interests now:

Of course, the fact that none of the principal players in the recent round of escalation wants to see it lead to a conflict doesn’t mean that the threat of open warfare is off the table. Tit-for-tat escalation brings its own threat that miscalculation or misunderstanding can trigger a broader confrontation and an outbreak of fighting. As the U.S. expands its military footprint in the region, the risks of that kind of accidental war will rise. Thus, it’s important for the players to take steps in the coming days to lower the temperature and reverse the escalatory cycle.

Amb. (ret.) Gerald Feierstein is MEI’s senior vice president. The views he expresses are strictly his own.