There and Back Again: Indonesian Fighters in Syria 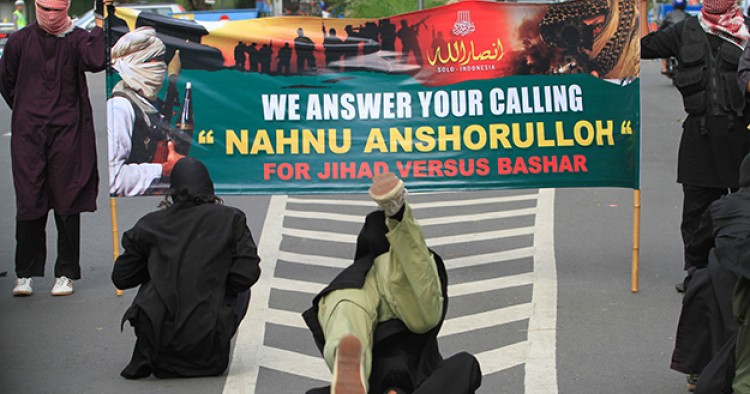 In July of 2014, I met with a former member of Tanah Runtuh, Jemaah Islamiyah’s onetime affiliate in Poso, Central Sulawesi. As he was newly released from prison, I wanted to inquire as to his future plans. Would he go to the hills and fight with Mujahidin Indonesia Timor (MIT)? Would he follow in the footsteps of many of his former comrades and become a contractor? When he walked into the room, I was surprised to see that he sported an Islamic State (ISIS) t-shirt. “Do you want to join ISIS?” I asked. “If I can raise the money,” he answered.[1] A week later, I met with a former affiliate of Noordin M. Top who was running several small businesses in Solo, Central Java. I had interviewed him in 2012 when he was due to open the Solo branch of Dapur Bistek, a restaurant-cum-job training program for former fighters run by the Institute for International Peace Building. With his son next to him eating ice cream, he told me that he hoped to fight with Jabhat al-Nusra (the Nusra Front); he simply needed to raise the money.[2] Whether or not these two individuals ever make it to Syria, their responses raise important questions. My colleague in this series, Nuraniyah Navhat, has already adeptly addressed what motivates Indonesian fighters to join ISIS and the Nusra Front.[3] It is also important to investigate how they actually travel to Syria and what might motivate them to return.

How Do They Get There?

Of the approximately 8,000 foreign fighters from 74 countries believed to have joined the Syrian conflict, it is unclear how many of them are Indonesian. Official government estimates vary from a low of 24, cited by General Ansyaad Mbai, the director of the National Anti-Terrorism Agency, to a high of 56, as stated by General Sutarman, the National Police commander.[4] One Jemaah Islamiyah member stated that by his own count, some 150 fighters were in Syria with either ISIS or the Nusra Front.[5] Australian media estimates put the number of Indonesian fighters on the ground in Syria at closer to 300.[6] Security analysts believe that official government estimates are understating the number of Indonesian fighters, while Australian estimates are overstating the number.

Aspiring jihadis are traveling to Syria by way of four main channels. Some join with Jemaah Islamiyah as part of its humanitarian arm, Hilal Ahmar Society Indonesia (HASI), for a month-long tour providing relief and medical assistance. While on the tour, these individuals slip away. Most have joined the Nusra Front.  However, when ISIS split from the Front, a portion of those fighters left for ISIS. Others have made it to Syria after performing the ‘umra, the little hajj, taking a boat from Yemen through the Suez Canal to Latakia in Syria.

Others, most notably alumni of the Al Mukmim Islamic boarding school in Ngruki near Solo, have used Facebook to connect with fellow alums studying in the Middle East. Nine alumni of Al Mukmim, also known as Ngruki, have been documented as having joined the fight, leaving from boarding schools in Yemen and Pakistan, where they had been doing follow-up study.[7] Several were attending Al Iman, a boarding school in Sana, Yemen. Al Iman has been especially vocal in its support for Sunni fighters in Syria and thus provided the necessary conduits to travel there. These fighters connected other Al Mukmim alumni to contacts in Syrian militant groups.

Still others are leaving directly from Indonesia, using channels similar to those operationalized during the Soviet-Afghan war. Indonesians are traveling to Malaysia and from there departing for Syria.[8] Much like the Afghan veterans who identified themselves as Filipinos on forged passports to head to the Afghan front, Indonesians are identifying themselves as Malaysians.[9] Interestingly, Malaysians are also departing from Indonesia to avoid attracting the attention of their own security services. Moreover, there is now a sufficient enough number of Malaysian and Indonesian fighters on the ground in Syria that, as of July 2014, there was discussion of forming a katibah nusantara, or a special Malay-speaking unit, of ISIS.[10]

There are two major routes that Indonesians tend to take when traveling to Syria to join ISIS or Jabhat al-Nusra. Most typically, they cross through Turkey since Indonesian citizens are eligible for a visa-on-arrival. One common route is to fly from Jakarta to Istanbul and then travel over land to Reyhanli, a town near Turkey’s border with Syria. From there, arrangements are made to cross the Syrian border. Others have taken a more indirect route, traveling from Indonesia to Malaysia and then departing from Kuala Lumpur, often with Malaysian identity papers, to Doha, Qatar. They then travel to Istanbul and finally go by land to Reyhanli. In December 2014, Malaysian authorities caught some two dozen Indonesians attempting to go to Syria via this latter route. The Indonesian diaspora in the Middle East has been critical in assisting Indonesians seeking to fight with ISIS and the Nusra Front by providing them with logistical support and local contacts.[11] Once the jihadis arrive at the border, someone from ISIS or Jabhat al-Nusra picks them up and transports them to safe houses on the other side. Total travel costs, including the flight to Istanbul, local transport to the border, and two days accommodation along the way, are estimated at between $1000 and $1500.

Some Indonesians joining ISIS and the Nusra Front hail from radical groups, while others are independent operators, radicalized through the Internet. Jemaah Islamiyah members typically affiliate with Jabhat al-Nusra. Jamaah Ansharut Tauhid (JAT) and Mujahidin Indonesia Timor, whose leaders have sworn bai‘at (an oath of allegiance) to Abu Bakr al-Baghdadi, send their members to ISIS. One key figure in the Indonesia-Syria pipeline is the takfiri ideologue Aman Abdurrahman, who began translating ISIS tracts following its formal split from the Nusra Front in April 2013. He has been one of the most vocal advocates of ISIS from his cell at Nusakambangan prison.

In one example of Abdurrahman’s influence, Sam, a Ring Banten[12] member who served a nine-year sentence for robbing a goldsmith to finance the first Bali bombing, visited his friend Rois Abu Syaukat in Kembang Kuning prison within the Nusakambangan prison complex. Aman Abdurrahman is Rois’s cellmate. Shortly after the visit, Sam left for Syria.

Sam professed in January 2012 that he had no intention of participating in any future “actions” in Indonesia. However, he would do what he could to “help oppressed Muslims anywhere.”[13]When Taufik Andrie, the director of the Institute for International Peace Building, met with Sam in late 2012, he found that Sam was distressed that no one was mobilizing either relief aid or jihad on behalf of the Rohingya minority in Burma.[14] There was no mention of Syria. After meeting with Rois and Aman at Kembang Kuning in 2013, he decided to join the fight in Syria. Given that Aman is a key ISIS supporter, it is likely that he prevailed upon Sam to join ISIS. On arrival in Syria, Sam “remained in ready contact via Facebook and shared information on developments in Syria,” especially as they pertained to ISIS.[15] Sam became a cheerleader for ISIS with Facebook postings on Syria’s “5-star jihad.” He was killed in Ramadi in April 2014.

Other Aman Abdurrahman supporters have been more entrepreneurial, setting themselves up as ISIS recruiters and organizing mass pledge sessions in radical mosques. A few armchair jihadis like M. Fachry have latched onto ISIS propaganda to widen their networks through social media and through organizing public demonstrations of support for the Islamic State. But unlike others, M. Fachry, who leads the Forum Aktifis Syariat Islam (FAKSI, Forum of Islamic Law Activists), has, wisely perhaps, played no direct role in sending Indonesian fighters to Syria. However, the publicity machinery he has created, especially his jihadi website Al Mustaqbal, has allowed Aman Abdurrahman to become, as Indonesia watcher Sidney Jones puts it, “the most important ideological promoter of ISIS” in Indonesia despite being physically confined to prison.

In August of 2014, several Indonesians who had fought with ISIS returned home, citing disillusionment with the tactics of the movement. Disillusionment is among the most common factors leading someone to disengage from terrorism. A fighter motivated to disengage due in part to disillusionment may be disappointed with a movement’s tactics, its leaders, their own role, or the ideology upon which the group was founded. In this instance, the returnees cited their disillusionment with the ways in which ISIS departed from the Qur’an’s rules of war; they were particularly disturbed to discover that they would be fighting and killing other Muslims.[16] Those who joined ISIS were motivated by a desire to assist in building the caliphate, to fight in the battle of end times, as some have thought Syria to be, or to fight in a legitimate jihad as their elder brothers who fought in Afghanistan had done some decades earlier. What may have been less clear to them was that they were entering a civil war in which their targets would be fellow Muslims.

It is important for the Indonesian government to keep in mind that ISIS fighters may become disillusioned with what they see and what they are compelled to do. Thus, it must improve its monitoring capacities so that it knows who is going to fight in Syria; who has crossed into Turkey or Jordan; and who is returning home and why. As most Indonesian fighters cross into Syria through Turkey, it is also necessary to improve intelligence sharing capacities with the Turkish government and to develop the kind of monitoring databases that neighboring Malaysia and Singapore use to identify and track fighters. When Malaysian officials arrested some two dozen Indonesians en route to join ISIS in December 2014, they were able to do so because of these superior monitoring capacities. It is imperative that the Indonesian, Malaysian, and Singaporean intelligence services maintain open channels and parallel capacities.

Perhaps most important, the Indonesian government must provide a mechanism for disengagement and reintegration upon the fighters’ return. Trying returning fighters in court, as the Belgians have done, or stripping fighters of their citizenship, as the British have pondered, would only exacerbate feelings of alienation. Programs that foster reintegration offer returnees the opportunity to conceive of their post-jihad life and post-jihad priorities, as well as to develop post-jihad networks of friends and family.

[5] Interview with member of Jemaah Islamiyah.

[6] Interview with member of Jemaah Islamiyah.

[7] “Indonesians and the Syrian Conflict,” Institute for the Policy Analysis of Conflict, IPAC Report 6, January 30, 2014, 6, http://file.understandingconflict.org/file/2014/01/IPAC_Indonesians_the_Syrian_Conflict.pdf.

[12] Ring Banten is a violent offshoot of Darul Islam.

[15] Interview with Zaky Solo by Noor Huda Ismail, August 30, 2014. Zaky, jailed for providing weapons to the Aceh training camp, was released from Kembang Kuning prison in Nusakambangan in mid-August 2014.