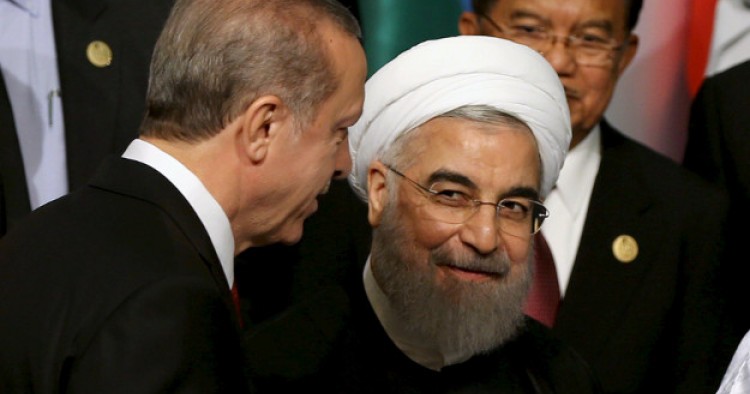 Turkish President Erdogan is about to make a high-profile visit to Tehran. The trip is not just about a potential warming of relations between Ankara and Tehran but some think it might become a turning point and herald a new regional alignment on how to end the Syrian civil war.

While Turkey is lashing out at the West for what it sees as “lack of support for the government in the aftermath of the failed coup”, it is rekindling its relations with Iran. Referring to the country’s Western allies, President Recep Tayyip Erdogan said "Those who we imagined to be friends are standing by the coup plotters and by the terrorists," in a televised speech on August 2 at his presidential palace. "This coup attempt has actors inside Turkey, but its script was written outside."

He was, however, grateful to Iranian President Hassan Rouhani, who was among the first foreign leaders to call Erdogan after the coup attempt to offer his support. Iranian Foreign Minister Mohammed Javad Zarif’s visit to Ankara on August 12 came amid warming ties between Tehran and Ankara. Zarif and his Turkish counterpart agreed to boost trade and pledged greater cooperation on resolving the Syrian crisis. At a time when anti-American sentiment has hit an all-time high in Turkey, with government officials blaming the United States for being behind the coup attempt and pro-government circles advocating leaving NATO, many wonder whether Turkey’s rapprochement with Iran marks a strategic shift.

Turkey has been uneasy about rising Iranian influence in the region in the aftermath of the Arab uprisings that began in 2011. Particularly concerning for the Turkish government has been the role Iran played in the Syria crisis at the expense of Turkey. Just last year, in a bid to counter-balance Iran, Turkey pushed aside its differences with Saudi Arabia for Sunni preeminence and worked to build a closer partnership with Riyadh on Syria and Iraq. The Turkey-Saudi alliance, however, has not delivered the results Ankara wanted. Turkey has become marginalized and saw its arch-enemy, the PYD, gain ground on its southern border while ISIS, not toppling the Assad regime, has become the West’s main focus in Syria.

Turkey has finally decided to recalibrate its Syria policy, which brings Ankara closer to the Iranian stance. Before the coup attempt, Turkey had signaled that it might soften its approach to President Bashar al-Assad’s role in a transition. The Turkish government already seemed to test the waters to gauge the reaction to rapprochement with the Assad regime. On July 13, Turkish Prime Minister Binali Yildirim stated, “In order for counterterrorism efforts to succeed, there has to be stability in Syria and Iraq. We normalized our relations with Israel and Russia. I’m sure we will go back to normal relations with Syria as well.” And on August 11, the Turkish ambassador to Russia was quoted as saying, "We want the existing political leadership of the country to take part in the negotiation process.”

Iran and Turkey appear to be converging on a number of shared interests in the Syrian conflict. During Zarif’s most recent visit, the two countries agreed on the need for the Syrian people to determine their own future and the necessity to stand against ISIS and Jabhat al-Nusra, now known as Jabhat Fatah al-Sham. Ankara and Tehran are also united in their desire to prevent an autonomous Kurdish region in northern Syria. However, despite the rekindling in Iranian-Turkish ties, several hurdles remain for it to be considered a strategic shift. Much of it will be determined by how far the parties are willing to compromise on the fate of Assad and their visions for Syria’s future. Turkey is opposed to a post-Assad government that is dominated by the minority Alawite sect, and seeks a more inclusive government with equal representation for Sunnis as well.

Time will show if Iran—together with Russia—can come up with a compromise solution for Syria that can win Turkey on board. Sudden reports in Iranian media about Tehran having twice offered sanctuary to Assad is perhaps a signal to the Turks and others that, for the Iranians, the fate of the Syrian president is negotiable as long as a comprehensive deal can be struck about Syria’s future.

The Iranians believe that Erdogan, a man who has seen his broader foreign policy agenda crumble, is open to a face-saving exit from the Syrian quagmire, but that Assad remaining in power is an impediment for a Turkish policy U-turn on the Syrian civil war. This was a point that the Turkish ambassador to Tehran bluntly stressed last week. “We do not see peace and stability in Syria with Bashar Al Assad in the picture. This is our big concern,” the Turkish ambassador Riza Hakan Tekin told his Iranian hosts.

Other than this obstinate split over Assad’s fate, Iran has a number of reasons for wanting to bring Turkey closer. Ankara remains one of Iran’s top trading partners and is seen both as a capable, but also innocuous source of investment in Iran at a time when shoring up the country’s economy is a key priority after years of sanctions. There is also the Kurdish question and the perpetual mutual Iranian and Turkish desire to prevent the emergence of Kurdish independence in Syria, Iraq or anywhere else in the region.

And despite the latest development in military cooperation between Iran and Russia in the Syrian conflict, there is still plenty of doubt in Tehran about Moscow’s long game in the Middle East. From Iran’s perspective, building more trust in ties with Turkey lessens Iranian dependence on a wavering Russia. At the same time, the Iranians are acutely sensitive to the charge of being depicted as a Shiite and therefore sectarian power, and mending ties with Sunni-majority Turkey has the added benefit of mitigating against such charges.

Despite having engaged for five years in proxy war against each other by backing opposing sides in the Syrian war, Tehran and Ankara never allowed for relations to collapse. The failed Turkish coup has prompted a Turkish reevaluation across a host of foreign policy questions, and so far it appears that Iran might just be one of the big winners.