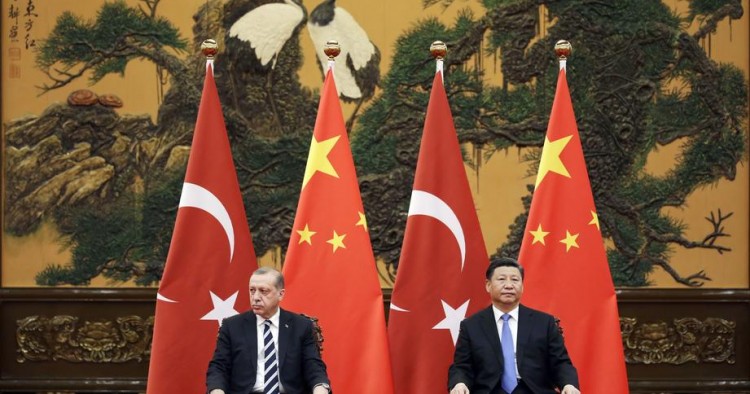 The signing of a joint communiqué in 2000, which was followed by a flurry of reciprocal visits and an uptick in bilateral trade, set Turkey’s relations with China on a positive trajectory. The relationship began to develop rapidly ten years later, when, during Chinese Premier Wen Jiabao’s visit to Turkey, Ankara and Beijing signed agreements lifting bilateral relations to the level of “strategic cooperation.”[1] Overlapping with the visit, the Turkish and Chinese air forces conducted their first ever joint military exercises at Konya air base in central Anatolia.[2]

The subsequent blossoming of Turkey’s relations with China has occurred against the backdrop of Turkey’s apparent strategic estrangement from the West. The differences between Ankara and the United States and its Western allies have accumulated, straining their relations.[6] Indeed, since the failed military coup of July 2016, Turkey’s relations with the West are at an all-time low. These circumstances have prompted some observers to consider whether Ankara’s increasingly tempestuous relationship with the West might lead to a fundamental shift in its strategic orientation, toward the East.[7]

But have Turkey and China succeeded in developing the full-blown “strategic partnership” envisaged in their 2010 joint communiqué? Relatedly, is Turkey on the verge of shedding its strategic links with the West in favor of consolidating them with China? This article aims to shed light on these two questions.

In November 2016 Prime Minister Erdoğan indicated — and not for the first time — that he might abandon Turkey’s quest for accession to the European Union (EU) in return for full membership in the SCO.[8] Opinion is divided as to how to interpret Erdoğan’s remarks. Some experts on Turkey consider such statements to be a reaction to the slowdown in EU accession negotiations.[9] Yet, others believe that Erdoğan’s lashing out represents serious consideration of a purposeful shift in Turkish foreign policy toward the East.[10] The latter interpretation, however, does not stand up to scrutiny, as Turkey-China relations have had their ups and downs. There are several areas where either the relationship has not met the expectations of one of the sides, or where the two governments have clashed.

Regarding economic affairs, China has complaints of its own. In September 2013, the Sinop nuclear power plant tender was given to China’s rivals, the Japanese-French consortium, at the last moment. In November 2015,  just prior to President Xi’s arrival to the G20 Antalya Leaders’s Summit, Turkey cancelled negotiations over the Chinese missile defense bid.[11] The timing of the cancellation was humilating for China and a personal embarrassment for President Xi.

The fact that Beijing has never declared the Kurdistan Workers’ Party (the PKK) to be a terrorist organization has rankled Turkish leaders, especially as Ankara, in deference to China, has designated the Eastern Turkistan Islamic Movement (ETIM) as such. Beijing’s argument that it does not customarily list terrorist organizations in China is far from satisfactory to Ankara. Ironically, whereas neither Russia nor China have declared the PKK as being a terrorrist group, all NATO members have.

Differences over the Uyghur issue have also bedeviled Turkey-China relations.[12] Beijing is quite uncomfortable with the anti-China activities of the Uyghur diaspora and nationalist circles within Turkey. In this respect, Beijing considers Ankara’s issuance of Turkish passports in recent years to Uyghur asylum seekers a direct affront.[13] Meanwhile, Ankara has insisted that such actions be viewed within the framework of Turkey’s humanitarian responsibilities, rather than as an anti-China stance.

According to some reports, there are anywhere between 10,000 to 20,000 Uyghurs living in Idlib province in Syria, and the Uyghur militants have been fighting in the ranks of the Ahrar al Sham. Beijing is concerned that should some of these fighters return to China, they could become a security threat.[14] In this juncture, Beijing considers Ankara as being critical to preventing further development of the Uyghur jihadi network in Syria.

An additional sore point — at least partially related to the Uyghur issue — was Beijing’s imposition of new visa restrictions on Turkish citizens as of February 15, 2016. The new visa regime followed several instances in which Chinese authorities claimed to have uncovered plots by a group of Turks and Uyghurs to use counterfeit Turkish passports in order to smuggle people from China to Syria.[15] The new visa regime, which made it almost impossible for Turkish citizens to visit China, was instituted in spite of the fact that the previous year Ankara had introduced an e-visa system to facilitate travel to Turkey by Chinese citizens.

Chinese Vice Foreign Minister Zhang Ming was one of the early visitors to Ankara to express Chinese solidarity with the AK Party (AKP) government in the wake of the unsuccessful July 15, 2016 coup attempt in Turkey.[16] Since then, with Ankara’s relations with the United States seemingly in tatters, the AKP government has tried to strengthen ties with China. In an effort to boost the relationship, President Recep Tayyip Erdogan, accompanied by a very large delegation, participated in the Silk Road Forum in Beijing last May. Following the Forum, Turkey and China signed agreements on the extradition of criminals, international highway transportation and reciprocal establishment of cultural centers.[17]

Beijing might well be using the Belt Road Initiative (BRI) to coax Ankara to take additional steps against Uyghur dissidents in Turkey. Yet, whether or not that is the case, the AKP government has seemed keen to win Beijing’s trust and confidence. On August 3, 2017, the two countries’ foreign ministers, Mevlüt Çavuşoğlu and Wang Yi, met in Beijing. At the conclusion of the meeting, Çavuşoğlu vowed to root out anti-Chinese militants and to prohibit in Turkey “any activities targeting or opposing China,” including measures to suppress media reports that could be considered as anti-Chinese.[18]

The Communist Party of China (CPC) delegation visited Turkey at the invitation of the ruling AKP on 27-30 December 2017. Hu Changsheng, head of the CPC delegation, met separately with party representatives from the ruling AKP, the main opposition (i.e., the Republican People’s Party, or CHP), and the Vatan Party (formerly Workers’ Party).[19] It is interesting that the CPC delegation took the time to meet with officials from the Vatan Party (a small party, which does not have a single seat in the Turkish parliament) but not with those from the Peoples’ Democratic Party (HDP), the Nationatist Movement Party (MHP) and the İyi (Good) Party — all of which are represented in the parliament. It seems that the CPC considers the Vatan Party as an important partner on Turkey-related affairs. Furthermore, the visit of CPC with AKP leaders indicates that the ruling parties of Turkey and China are interested in intensifying their cooperation through the creation of multiples channels of dialogue.

Last October, President Erdoğan appointed Chief Advisor Abdülkadir Emin Önen as Ambassador to China.[20] The selection of Önen — the first non-career diplomat appointed to this post — is a clear sign that President Erdogan wants to develop a direct channel to Beijing and a closer relationship with the Chinese leadership.

Economic relations have intensified since 2016, despite some bottlenecks. According to the Turkish Statistical Institute, bilateral trade rose to $27.8 billion in 2016, and reached $21.66 billion in the first 10 months of 2017.[21] According to the Chinese Ministry of Commerce, Chinese FDI in Turkey in 2016 was valued at $642.3 million.[22] The Turkish Ministry of Economy claims that there are 786 Chinese origin companies registered in Turkey as of 2017.[23]

Tourism is also on the upswing. About 200,000 Chinese tourists visited to Turkey in 2017. Turkish authorities are planning for the number of Chinese visitors to reach 300,000 by the end 2018.[26] And most recently, China has eased visa restrictions on Turkish businesses — a goodwill gesture to the AKP government.

Is a Comprehensive Strategic Partnership on the Horizon?

The AKP government’s efforts since the July 2016 coup to broaden and deepen relations with China have shown positive results. However, Turkey-China relations have not yet developed into a comprehensive strategic partnership — and there are strong reasons to believe that it is unlikely they will.

For one thing, China Turkey remains dissatisfied with the current level of economic engagement with China. Sino-Turkish bilateral trade has been stuck at about $28 billion for the last five years, a little over $50 billion target set in 2015. There is no sign that the total trade volume could reach to $100 billion envisaged for 2020. Moreover, the trade balance continues to be skewed sharply in China’s favor; although the value of Chinese imports climbed to $25.4 billion in 2016, Turkey’s exports to China were a mere $2.3 billion.[27] Additionally, to date, Turkey-China cooperation in building the New Silk Road seems to be more an exercise in wishful thinking than a concrete plan to achieve a specific outcome. Indeed, it remains unclear how Turkey’s Middle Corridor will be integrated into China’s BRI.

For another, mutual trust and confidence is somewhat wanting. Beijing, evincing “cautious optimism” about future relations with Ankara nonetheless is careful to avoid drawing too close to Turkey, lest the latter’s policies toward Syria, Iran, Russia or the West jeopardize its own interests. Meanwhile, Ankara seems to have no clear strategy in crafting its relations with Beijing. Ankara’s China policy lies somewhere between seeking to diversify its relations with the major powers and making a sharp break from the past by shifting its strategic orientation from the West to the East.

[6] These contentious matters include Turkey’s intervention in Cyprus, the Armenian question, lack of support during Operation Iraqi Freedom, democracy and human rights, the handling of the Syrian civil war, the stalled European Union (EU) accession process, and the Kurdish issue.

[23] The Turkish Ministry of Economy, https://www.ekonomi.gov.tr