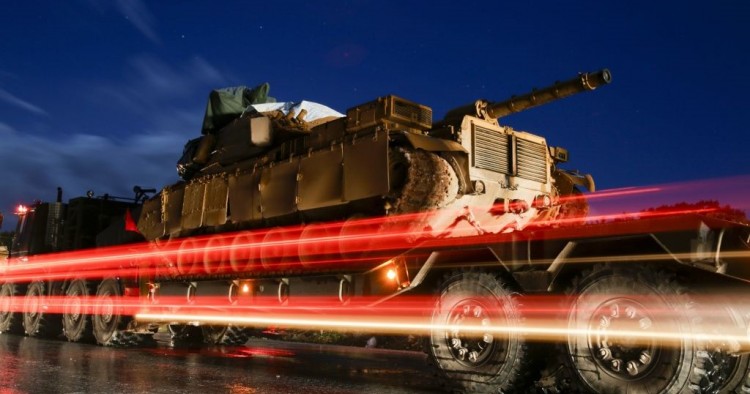 Turkish trucks carrying $10 million worth of tomatoes are stranded at the Russian border, again. The miles-long queues of vehicles awaiting clearance from Russian authorities are reminiscent of the strained ties between the two countries after Turkey shot down a Russian jet in 2015. After the incident, Russia slapped sanctions on Turkey and imposed a ban on Turkish agricultural imports. As the two countries slowly resumed ties, Russia lifted the restrictions on Turkish food imports, but the tomato ban remained in effect, reminding Turks that not all was forgiven and forgotten. Eventually, Russia lifted the ban on tomatoes too, but as tensions between Moscow and Ankara have escalated in the last few weeks over Syria, the tomato war has once again flared up. Producers in the southern Turkish city of Antalya, who sell 80 percent of their tomatoes to Russia, are expecting the government to resolve the rift. But Turkish President Recep Tayyip Erdogan, who has developed a close rapport with his Russian counterpart, Vladimir Putin, is in a tough spot.

The flashpoint in the increasing tensions is Idlib. The push by regime forces into the province over the past few months has angered Turkey. In a 2018 deal struck in Sochi, Turkey and Russia agreed to create a de-militarized zone in Idlib, and Turkey pledged to ensure the withdrawal of radical rebels from the area. But neither Russia nor Turkey is happy with what has happened since then. The Turkish side complains that the regime, backed by Russia, has consistently violated the cease-fire and recently embarked on a full-fledged operation to capture the country’s last major rebel stronghold. For their part, the Russians complain that radical groups have dominated Idlib since the agreement and accuse Turkey of failing to deliver on its promises. The tensions over Idlib have escalated dramatically in recent days. In a rare direct military confrontation between Turkish and Syrian regime forces, 14 Turkish soldiers and over 100 regime troops were killed in two separate clashes over the past 10 days.

Turkey has since dialed up its criticism of Russia, with Erdogan accusing Moscow, along with the Assad regime, of killing civilians and vowing to strike regime forces “by air or ground anywhere in Syria” if they attack Turkish troops again. Ankara has also been pressing Russia to use its influence on the regime to ensure it pulls its forces back to a previously agreed cease-fire line, and to vacate the strategic M5 highway linking southern and northern Syria. But following through on that threat and expecting Moscow to deliver on Ankara’s request is unrealistic. Russia controls the skies in Syria, making Turkish airstrikes against regime targets risky. In the absence of air cover, escalating clashes with regime forces will make Turkish troops in Idlib even more vulnerable than they already are. Several Turkish observation posts in the province are already under siege by regime forces. Russia is sure to come to regime’s aid in the event of a Turkish offensive, raising the stakes for Ankara even further. Turkey’s efforts to pull Russia to its side against the regime’s Idlib offensive are likely to fail, and Russia is unlikely to force the regime to pull out of the territory it has already captured. If Turkey crosses the line, Russia has a lot of cards it can play — and tomatoes are just the beginning.

All these factors tie Erdogan’s hands in Idlib. But the stakes are high for the Turkish president. The fighting in Idlib has sparked the largest mass displacement of civilians in the war to date, leaving 700,000 people camped out in tents on the Turkish border. Erdogan cannot afford another major influx of refugees into Turkey given the growing nationalist backlash against the nearly 4 million Syrian refugees already there. Making things even more complicated for him is the mounting pressure from his allies at home. Devlet Bahceli, the leader of the far-right Nationalist Action Party and a long-time Erdogan ally, recently upped the ante, saying, “There will be no peace in Turkey until Assad is brought down from his throne. Turkey must start plans to enter Damascus now,” and urged the government to revisit its growing ties with Russia. Meanwhile, Dogu Perincek, the leader of ultrasecularist, ultranationalist Patriotic Party and another Erdogan ally who has advocated closer Turkey-Russia ties, took the opposite approach, calling on the government to normalize ties with the regime.

Erdogan is in an unenviable position. His recent threats against the regime have raised the stakes. If he matches his words with actions, he may face Russia’s wrath. If he doesn’t, he will suffer Bahceli’s instead. In the meantime, Turkish soldiers in Idlib are ever more vulnerable to regime attacks, hundreds of thousands of people are camped out on Turkey’s border in subzero conditions, and tomato producers in Antalya are pushing for this all to be over, fast.