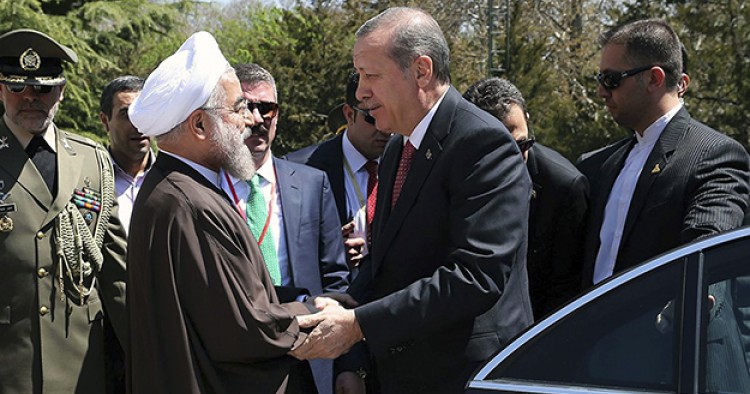 Turkish Foreign Minister Mevlut Cavusoglu, reiterating Turkey’s support for a diplomatic solution over the use of force regarding Iran’s nuclear program, welcomed the interim deal between Tehran and the world powers. Turkey's slowing economy may be among the first to reap economic benefits from the deal, and Ankara’s longtime quest to become an energy hub could finally be realized. Yet the deal could also pose a challenge to Ankara’s Iraq and Syria policies and its recent rapprochement with the Saudis.

In an effort to capitalize on an anticipated trade windfall as the six world powers lift sanctions on Iran, Turkey’s President Recep Tayyip Erdogan travelled to the Islamic Republic on April 7 to seek closer economic ties. The trip came amid strong criticism from Iranian politicians over Erdogan’s recent anti-Iran remarks, with several lawmakers demanding that Erdogan call off his visit.

The tension peaked in late March, when Erdogan declared his support for a Saudi-led military operation in Yemen targeting Houthi rebels, and suggested that the group's links to Tehran were evidence of Iranian efforts to dominate the region.

"[These efforts have] begun annoying us, Saudi Arabia, and the Gulf countries. This is really not tolerable, and Iran has to see this," Erdogan said at a press conference. He later implied in a television interview that Iran had forces inside Yemen, declaring that "Iran and the terrorist groups must withdraw."

Iran's foreign minister was quick to respond, accusing the Turkish president of fomenting strife in the Middle East and rebuffing his accusation that Iran was trying to dominate the region.

Yet the potential trade implications of the nuclear deal are too tempting for Ankara to continue on such a contentious path; as such, Erdogan downplayed the two countries’ foreign policy differences during his visit to Iran.

Few countries will feel the impact of a possible Iranian reintegration with the world economy more than Turkey. Regional chaos has dealt a blow to Turkey’s export-oriented economy, and the draconian sanctions targeting Iran have added to Turkey’s troubles. Turkish exports to Iran fell from nearly $10 billion in 2012 to $4 billion in 2014. The end of sanctions would mean a surge in Turkish exports to Iran, triggering an increase in bilateral trade. With the Preferential Trade Agreement (PTA) between Turkey and Iran, which reduces tariff barriers between the two countries, coming into effect this year, Turkish exports would double within the next two years.

Sanctions on Iran hit Turkey’s tourism sector as well, as Turkey has always been a popular destination for Iranian tourists. Iranian consumer spending has been hit hard by sanctions, leading to a sharp decline in the number of Iranians visiting Turkey. The lifting of sanctions would likely mean a boost for Turkey’s tourism sector.

But the most appealing part of sanctions relief for Turkey is its potential implications for the energy sector. Turkey imports almost 20 percent of its natural gas from Iran, though there have been disagreements over the price of Iranian gas. In 2012, Ankara took Tehran to an international court of arbitration, arguing that Iran was overcharging Turkey for its natural gas. The two sides have not reached an agreement yet, but Turkey is hoping to deepen energy trade in return for lower prices for gas if sanctions are removed.

Aside from being an energy consumer, Turkey has long sought to become an energy hub. Since the Ukraine crisis sparked concerns over a possible cut in Russian natural gas to Europe, Turkey has promoted itself as a partner in Europe’s quest for energy security. To that end, Turkey signed an agreement with Azerbaijan to build the Trans-Anatolian Gas Pipeline (TANAP), which would deliver natural gas from Azerbaijan through Georgia and Turkey to Europe.

TANAP’s full potential can be realized with access to the Iranian supply. Ankara has reportedly already started working on its pipeline infrastructure to enable transit of Iranian gas to Europe once sanctions are removed. Iran also wants to transport its natural gas to Europe and has recently announced that it is interested in buying a stake in TANAP. If realized, TANAP could transform Ankara-Tehran energy cooperation.

However, a lifting of sanctions on Iran could complicate Turkey’s regional policy if it leads to a more assertive Iran. Ankara is concerned that the deal will free Iran's hand in the Middle East, where it has been vying for power and influence at Turkey’s expense, and that further Iranian influence will bring the Iranian regime closer to Europe and the United States. Iran’s support for Shi‘i militias in Iraq and Syria and the Assad regime have already undermined Turkey’s interests. If an unbound Iran with more resources due to sanctions relief steps up its support in these countries, Turkey might be further marginalized in its immediate neighborhood.

An emboldened Iran will likely heighten tensions between the Islamic Republic and the Saudis, complicating Ankara-Riyadh relations. Turkey has recently taken steps to mend ties with Saudi Arabia, which have been strained due to differing stances vis-à-vis the Muslim Brotherhood and the Sisi government in Egypt. After the death of Saudi Arabia’s King Abdullah earlier this year, Turkey has embarked on a rapprochement with Riyadh in an effort to counterbalance Iran’s growing influence in Iraq and Syria and reclaim its leadership role in regional matters.

But there are limits to how far Turkey can go to counter Iran. Ankara is unlikely to sacrifice its relationship with Iran to accommodate Saudi policies. In the past, despite disagreements in regard to Syria and Iraq, Turkey refrained from alienating Tehran, and it is likely to pursue a similar approach in the future.

Erdogan’s conciliatory statements in Tehran and Ankara’s backpedaling from its strong backing of the Saudi war in Yemen highlight Turkey’s efforts to strike a balance between its Saudi and Iran policies. A balancing act, however, might become even more challenging if the tension between Tehran and Riyadh heightens further.