Turkish Cypriot Women Artists and Their Role in Society 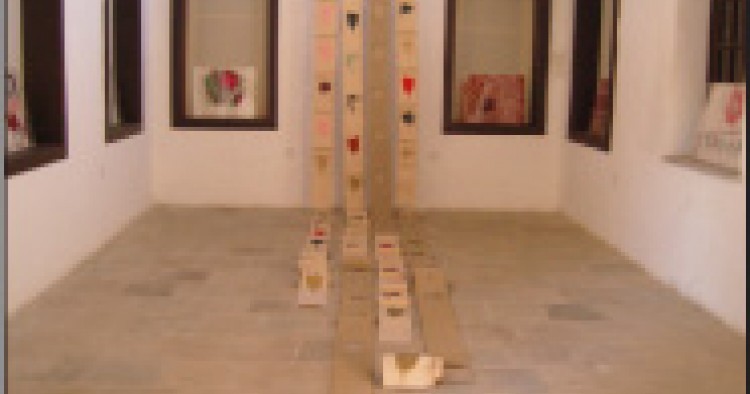 Art in the sense of Western style is a rather new concept for the Turkish society living in Cyprus. Under British rule, Turkish Cypriots were slow to follow new trends due to their lack of education and desire to preserve their national and religious identities. The British government reinforced this by fostering an education policy based on the Hellenic and Ottoman systems, in which the Orthodox Church and the Turkish Evkaf[1] organization took the responsibility for educating each society. Over the years, however, the prospects for Turkish Cypriot artists, including female artists, have improved; and the form and content of their cultural production has evolved, as has their role in Cypriot society.

The Republic of Turkey, founded in 1923, sought to initiate a modernization trend. This trend began in Cyprus in the 1930s with the appointment of some teachers from Turkey. As a result, female Turkish Cypriots, who previously had wrapped themselves in their veils and had lived behind the walls of their houses, suddenly experienced the fruits of a vibrant intellectual life. Women not only entered the labor force, but became cultural producers: writing poetry, contributing to newspapers, and participating in theater, music, and sporting events. However, progress for female Turkish Cypriots was nonetheless slow. The secondary school curriculum, for example, provided inadequate preparation for girls to begin university education. It was geared, instead, toward educating women to be “intellectual housewives” and providing few career opportunities (e.g., as primary school teachers, nurses, or midwives). Few families sent their daughters to Turkey or England to complete their education.

Thus, until the 1960s, art experiences for most female Turkish Cypriots consisted merely of drawing and painting, and remained only as primary and secondary school “classroom memories.” Surprisingly, despite women’s major role as art teachers in primary and secondary schools, the first Turkish Cypriot artists to exhibit their works were their male counterparts, such as Mehmet Necati (1904-1967), Hasan Öztürk (1904-1981), İsmet V. Güney (1932-2009), and Cevdet Çağdaş (1926-2009). Mevhibe Şefik, the first permanent secondary school art teacher, preferred to remain in the shadow of her students’ exhibitions.

In 1931, Sir Ronald Storrs initiated an annual event known as the Pancyprian celebrations — a program of athletic competitions and art exhibitions aimed at bringing together Greek, Turkish, Armenian, and British participants. The first Pancyprian exhibition, held at the Cyprus Conservatory, displayed 144 paintings, among which were the paintings of the male Turkish Cypriot artist. Mehmet Necati. After 1947, Ismet Vehit Güney joined these exhibitions. However, with the exception of Olga Rauf (1893-1987), the wife of a Turkish doctor, no female Turkish Cypriot artist’s works appeared at the annual Pancyprian exhibitions. During the 1940s and 1950s, even male artists’ interest in exhibiting their works at these annual events waned. The reason for this is rather obvious: In the United States and Europe the post-modernist movement, particularly abstract art, was taking hold. Meanwhile, Cypriot artists, like their counterparts in many Middle Eastern countries, were making attempts to practice Western art, mainly depicting landscapes, still lifes, or portraits in which they tried to hone their drawings through the use of three-dimensional as well as perspective techniques. The products were usually naïve or impressionist style in character. Art in the modern sense was a rather new concept for Turkish Cypriots, even for the intellectuals who studied abroad. In a 1946 newspaper article, Nazif Süleyman Ebeoğlu bitterly criticized the new trends, citing the difficulty of comprehending the “craziness” in modern art. Foreign artists, particularly the English artists living in Cyprus, also practiced mainly impressionist and post-impressionist or naïf cubist styles. The situation was not much different for the Greek artists, who only were acquainted with the schematic Byzantine-style icon painting. During the last decade of British rule in the 1950s, the attempts to create a Pancyprian society almost failed; instead, ethnic division reached its apex, resulting in the segregation of Cypriot’s communities.

The first solo exhibitions of Cypriot Turkish artists date back to 1947 — specifically to an opening by İsmet V. Güney at the British Institute, where the artist was teaching. Ayşe Halluma, a woman from Turkey married to a Turkish Cypriot, was the first female Turkish Cypriot to exhibit her works, which consisted of illustrations of the poetry of Özker Yaşın and Taner Baybars, two young Turkish Cypriots. Her exhibit opened on May 19, 1954 at the Çetinkaya Sport Club. Although all exhibits were sold out on the first day of the exhibition, it ended up unhappily for this young, talented artist when a family quarrel erupted, as is recorded in the diary of Taner Baybars.

The first Turkish Cypriot artists’ exhibitions were organized in 1960, the year of the founding of the Republic of Cyprus. These were repeated in subsequent years, and female artists who were mainly graduates of art schools took part in them. Their participation stemmed from the upgrading of girls’ secondary educational institutions in 1952, including the introduction of a new curriculum. These changes enabled women to earn Lycée diplomas, which in turn paved the way for them to attend higher educational institutions in Turkey. Sema Zihni (1932-1967), İnci Kansu (b.1937), and Göral Özkan (b. 1938) — the first graduates of Gazi Higher Teachers’ Training Institute (currently Gazi University) — started their careers as art teachers in the secondary schools. This was a promising turning point for those newly graduated young artists. However, due to the political turmoil in 1963, Turkish Cypriot society soon faced financial difficulties. With limited budgets (hardly enough to cover their living expenses) and restricted travel on the island, affording and even finding painting materials on the market became exceedingly difficult.

Nowadays, the number of artists is increasing, while specialization in different techniques and mediums is bringing richness to the art of Turkish Cypriot society. Emin Çizenel, Aşık Mene, Nilgün Güney, Ruzen Atakan, Günay Güzelgün, Ümit İnatçı, Feridun Işıman, İlkay Önsoy, and many others are following in the footsteps of their artistic forebears. The main style preferred by a majority of these artists is abstract impressionism, symbolism, neo-realism, and graphic art forms — all combined with local elements. Noteworthy artists include sculptors and ceramic artists, such as Şinasi Tekman, Baki Bogac, Zehra Şonya, and Ayhatun Ateşin, and paper art artists, such as İnci Kansu. Sensitivity to the environment, political developments, and daily human life are their main topics. Almost no Turkish Cypriot artist today depicts the bitter, bloody scenes of communal conflict.

In addition, there have been bi-communal art exhibitions, conducted under the auspices of the Embassy of the United States in Nicosia with the aim of fostering the peace process. These exhibitions, known as the Brushstrokes across Cultures, were successful attempts to bring together Greek and Turkish Cypriots as well as foreign-born artists and intellectuals. The first three exhibitions were organized in private art galleries both in the Greek and Turkish parts of Nicosia, in 1992, 1993, and 1997, while the last two (in 1997 and 1999) were organized in the American Embassy residence in southern Nicosia. These occasions, as well as bi-communal conflict resolution group training, encouraged the authorities of both sides to open borders for free circulation in the island on April 23, 2003. Since then, there have been several meetings, concerts, exhibitions, and conferences organized usually with the generous funding of the United Nations Development Program (UNDP). The first such event, the Marginal Art workshop, was organized in December 2003 at the buffer zone in Ledra Palace, Nicosia. There, artists, poets, and musicians worked together for three days and exhibited their works in the streets.

In recent years, another important project, open studio exhibitions, has been realized in Nicosia. The project’s aims were to bring people together to revive bi-communalism in Nicosia through art and artists, to enable the public to come into contact with art and artists and reacquaint themselves with the beauty and realities of the historic city, and to cultivate through art mutual understanding and respect. Thirty artists took part in the project’s first exhibition.

The Leaps of Faith Exhibition, curated by Katerina Gregos and Erden Kosova, opened in Nicosia on May 13, 2005. This was another international exhibition in which multi-disciplinary art projects were exhibited in a part of the UN-controlled Green Line (buffer zone) dividing the island. It marked the first occasion in 30 years that the area was opened up for use in an international event. This project aimed to animate and activate public spaces, buildings, and sites in the divided city of Nicosia.

Currently several joint exhibitions are underway, organized by the Cyprus Chamber of Fine Arts, Cyprus (EKATA) and European Mediterranean Art Association (EMAA). It is believed that these projects can, and are, bringing the members of the two societies closer together and contributing to the peace process.

Very recently, other joint exhibitions have taken place, including at the site of the Cyprus peace talks on the buffer zone. The second such exhibition, unveiled in July 2009 by the Special Adviser of the UN Secretary-General on Cyprus, Alexander Downer, featured works by the female artists Katerina Attalidou, İnci Kansu, Stella Angelidou, Ismet Tatar, Tatiana Ferahian, and Vicky Pericleous. Their works consisted of pieces illustrating different aspects of the Cyprus problem.[2]

The universities established in Northern Cyprus nowadays provide opportunities for exhibitions as well increasing research and publications about the recent history of art in Cyprus. One such great occasion to publicize female artists (including painters, sculptors, and ceramic artists) was held in 2002 at Eastern Mediterranean University. This event, on the occasion of International Women’s Day, featured works by 21 female Turkish Cypriot artists. Another important contribution is the formation of an archive of documents about Turkish Cypriot artists by the Centre of Cypriot Studies, Eastern Mediterranean University. The periodical Kadın/Woman 2000 also has given greater notoriety to female Turkish Cypriot artists.

However, despite the increasing opportunities for artists, difficult economic conditions, the lack of galleries, and the unrecognized status of the Turkish Republic of Northern Cyprus are obstacles to the sale of their works. Meanwhile, the lack of a modern art museum or archive has hampered the work of art historians and art critics.

[1]. The oldest Turkish institution responsible for pious foundations and philantrophy.

[2]. I acknowledge Ms. Özgül Ezgin, one of the curators, for her kindness in giving some of the illustrations for the article.

Brushstrokes across Cultures V, (2003), Residence of the Ambassador, United States of America, Nicosia-Cyprus.

Chrysochos, A. (1964). Painting, in Cyprus, A Handbook on the Island’s Past and Present, Publication Department, Greek Communal Chamber, Nicosia, p. 88.

Georghallides, G.S. (1979). A Political and Administrative History of Cyprus 1918-1926, with a Survey of the Foundation of British Rule, Nicosia: Cyprus Research Centre, Publications: VI.

Pyrgos, Mary A. (1993). The Cypriot Woman at a Glance, Nicosia, Cyprus: Pyrgos Publications.