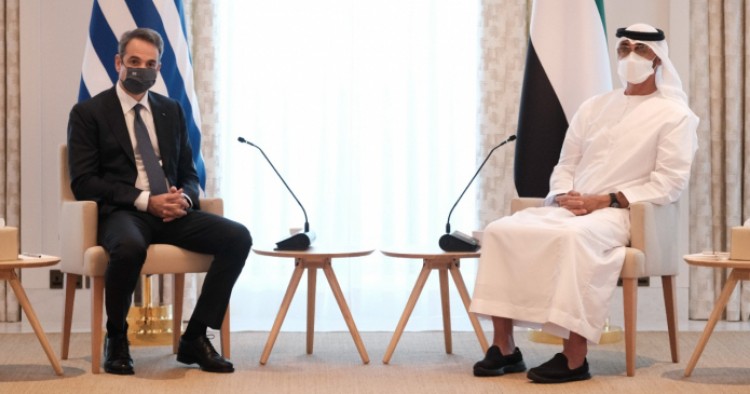 In mid-January the press reported that the United Arab Emirates (UAE) will soon participate in a joint military exercise with the United States, Canada, Slovakia, Spain, Cyprus, and Israel. While Israel’s inclusion is certainly newsworthy, it is also quite significant that the drill will take place in and be coordinated by Greece. This is just the latest step in a long process of engagement between Athens and Abu Dhabi.

On Nov. 18, 2020 the de facto leader of the UAE, Crown Prince of Abu Dhabi Mohammed bin Zayed, received Greek Prime Minister Kyriakos Mitsotakis for a historic two-day visit. The two parties concluded a “strategic partnership” agreement, the likes of which Greece hadn’t signed in decades. The comprehensive strategic partnership established cooperation on defense and foreign policy, while also touching on political cooperation, trade, development, tourism, energy, culture, food, agriculture, and digital and government services. The agreement strengthens the growing Abu Dhabi-Athens partnership, but also means that Europe is becoming increasingly enmeshed in Gulf rivalries and Middle Eastern geopolitical strife. Indeed, the most notable clauses of the partnership are those on foreign policy and defense, which seem directly related to consolidating Greek-Emirati cooperation against their common antagonist, Recep Tayyip Erdoğan’s Turkey.

This geopolitical link between the Mediterranean and the Gulf monarchies is quite recent. Traditionally, Greek relations vis-á-vis the Arab world have focused on Egypt, Syria, Libya, and other Mediterranean countries, support for the Palestinian cause, and cold relations with Israel. Since Greece and the UAE established relations in 1975, ties have primarily centered on the economic sector, while political relations were essentially sustained through the lens of the EU’s bi-regional partnership with the Gulf Cooperation Council.

However, the 2011 Arab Spring gave rise to a new dynamic in cross-Mediterranean relations. Turkey has since become more aggressive and geopolitically ambitious, offsetting Greece, Saudi Arabia, the UAE, and Egypt, and threatening the regional status quo. Due to its geographical proximity and history of antagonism with Turkey, Athens is in the crosshairs of Turkish ambitions, and some of Ankara’s actions have been straightforward threats against the Greeks. Ankara’s weaponization of the refugee crisis in February 2020, by funneling masses of asylum seekers and migrants toward the Greek-Turkish border in response to EU criticism of Turkish operations in northern Syria, created a serious strain in the already delicate relationship between the two neighbors. This was followed by aggressive gas exploration efforts in the eastern Mediterranean, which led to various dangerous standoffs between Greek and Turkish warships and put some EU members like France on high alert.

For Abu Dhabi and Riyadh, Ankara poses a threat to the post-Arab Spring regional order that the Gulf nations have tried to shape over the past few years. Both monarchies see Turkey’s support for the Muslim Brotherhood, as well as its geopolitical and military intervention in Libya, Syria, and the Horn of Africa, as part of a single strategy to exert Turkish influence anywhere in the region where there is instability or a power vacuum.

Indeed, the Islamist character of the perceived Turkish threat is only one dimension of a much broader geopolitical confrontation between Ankara and the Saudi-Emirati axis, led in this case by Abu Dhabi. Now, as Turkey tones down the Islamist rhetoric in its geopolitics and takes a step closer to hyper-nationalism, regional rivals do not seem relieved. On the contrary, the latest Turkish strategy, known as Mavi Vatan or “Blue Homeland,” now routinely features in Gulf discourse as a clear example of “Turkish expansionism.” By steering its naval and geo-economic interests directly to the oil-and-gas-rich region of the eastern Mediterranean, Turkey’s strategy cannot but alarm Greece and Cyprus. The November 2019 agreement signed by Turkey and Libya — establishing maritime borders between the two countries in the Mediterranean Sea, cutting across both Egyptian and Greek exclusive economic zones — is regarded as the first tactical step in the Mavi Vatan strategy.

Building a coalition in the eastern Mediterranean

Feeling threatened, Athens responded by doubling down on building a coalition in the eastern Mediterranean, starting with the establishment of a common framework to extract and export gas through the planned EastMed pipeline. Athens, Tel Aviv, and Nicosia signed an agreement to build the pipeline to transport gas from Israel’s Leviathan field to mainland Europe, passing through Cyprus’s Aphrodite gas field, and, notably, leaving Turkey out of the equation. Besides circumventing Turkey, the EastMed pipeline may also cost Qatar — a strategic ally of Turkey and a strong rival of the UAE — approximately half of its European gas market. Indeed, the UAE has become a stalwart supporter of the project because it cripples two of its key adversaries, and it officially joined the EastMed Gas Forum — which includes Egypt, Israel, Greece, Cyprus, Italy, and Jordan — in December. More importantly, by building out the gas framework into a political dialogue, the EastMed project has allowed the Emiratis to strengthen their connection with European countries that share concerns over Turkey, such as France, Greece, and Cyprus, but potentially the whole EU.

Since 2019, both the UAE and Saudi Arabia have been strengthening relations with Greece and Cyprus, acknowledging the Greek Cypriot government as the rightful and internationally recognized authority over the island, while denying recognition of the Ankara-backed de facto Turkish Republic of Northern Cyprus. The first-ever trilateral meeting between the UAE, Greece, and Cyprus, which took place in November 2019, helped accentuate this rhetoric, while simultaneously strengthening the Greek-Emirati relationship. In January 2021, UAE Minister of State for Defense Affairs Mohammed bin Ahmed al-Bowardi and Cypriot Defense Minister Charalambos Petrides, amid talk of “strategic relations,” signed a memorandum of understanding to enhance bilateral cooperation in the defense and military fields.

Greece, often underestimated as a geopolitical player, could become a particularly relevant interlocutor for the UAE. Despite its peripheral role in the EU and devastated economy as a result of the 2007 crisis, Greece is emerging as a potential big player in the Mediterranean, and Athens’s geostrategic significance cannot be overlooked. Greece is positioned between three continents, has geographical proximity to North Africa and the Middle East, and has three main ports that serve as gateways of goods to the EU. Coupled with projected economic growth of 4.1% by 2021, significant investment in defense (in excess of 2% of GDP, unlike most NATO countries), and anticipated additional expenditure on new warships from the United States and fighter jets from France, this could herald a new and more assertive Greece.

Recently, Abu Dhabi has increased military cooperation with Athens, sending F-16 fighter jets to participate in military exercises with the Hellenic Air Force, at the same time that France sent Dassault Rafale fighters to Crete. Although Turkey possesses a larger air force than the Emiratis, the superior and more advanced F-16s from the Emirati Air Force, and the opportunity to purchase F-35 jets from the U.S., ups the ante. Furthermore, Abu Dhabi is in talks with Athens to sell them some of the more advanced F-16s once the previous purchase is completed, which would also come as an unpleasant surprise for Ankara.

In a further sign of their growing military cooperation, from Nov. 30 to Dec. 6, Greece, together with the UAE, France, Cyprus, and Egypt, conducted a joint multinational aeronautical exercise nicknamed “Medusa” in Alexandria, Egypt. The exercise’s purpose is to enhance defense collaboration and operational cooperation, while unofficially flexing its military muscles toward Turkey. Medusa had previously taken place in 2019 with Greece, Egypt, and Cyprus, but France and the UAE decided to join this time around, in light of recent developments in the Mediterranean.

As underscored by Greece’s rapprochement with the Syrian regime and strengthening relationship with Egypt and Saudi Arabia, the increasing friction in Athens-Ankara relations has pushed Greece closer to Arab states in the anti-Turkey camp. In this context, the UAE may become Greece’s most important Arab partner. Growing UAE-Greece dialogue has also pushed Athens closer to the UAE-backed Libyan National Army led by Gen. Khalifa Hifter, the eastern-based unofficial government of Libya and rival of the internationally recognized and Turkish-backed western government of Fayez al-Serraj, based in Tripoli. In January 2020, Greece initiated talks with Hifter, who was welcomed by Mitsotakis, the Greek prime minister, in Athens.

Beyond the Mediterranean, a more intense dialogue between Athens and Abu Dhabi could have implications in other sectors as well. Athens shares cultural and religious ties with its Orthodox neighbors Serbia and Northern Macedonia, which could in the future provide an opening for Emirati investments into these countries, potentially proving instrumental to strengthening the UAE’s position in the Balkans and establishing closer ties with Turkey’s neighbors. Besides the Orthodox countries, the UAE, together with Saudi Arabia, could explore past relations with Bosnia and Kosovo and reinforce influence over the Balkans’ Muslim population, with the objective of denying Ankara the opportunity to do so.

The rivalry may extend into the Caucasus, where the Nagorno-Karabakh conflict flared up in September 2020, after more than 20 years of cease-fire. Azerbaijan counted on the support of Turkey, which sent armed drones, mercenaries from Syria, and some of its own armed forces to assist Baku. Greece, which has a robust political, cultural, and military partnership with Yerevan, called for the halting of Azerbaijani aggression and a peaceful resolution, while condemning Turkey’s intervention. Athens stated that Greece and Armenia have a mutual problem — Turkey — and appealed once more to the EU to respond to Turkey’s disregard for international law. Ankara and Baku countered by accusing Athens of training Armenian and Kurdish militias, which the Greeks dismissed as “groundless claims.” Meanwhile, the UAE welcomed Armenian President Armen Sargsyan on an official state visit last November, praising the Russian-imposed cease-fire.

It is now clear that both Greece and the UAE view their partnership as a bulwark against Turkish expansionism in the Mediterranean, be it under the “neo-Ottoman” or Mavi Vatan banner. For Abu Dhabi, Greece’s standing as a member of the EU could also be vital to revitalizing its ongoing efforts to get closer to Brussels. The major implication for the EU would be an even more blurred geopolitical border between Europe and the Middle East.

Dr. Cinzia Bianco is the Gulf Research Fellow at the European Council on Foreign Relations, based in Berlin, where she is working on political, security and economic developments in the Arabian Peninsula and Gulf region and relations with Europe. Additionally, she is a senior analyst at Gulf State Analytics, a Washington, DC-based geopolitical risk consultancy. André Rodrigues Rocha is an intern at Gulf State Analytics. The views expressed in this piece are their own.