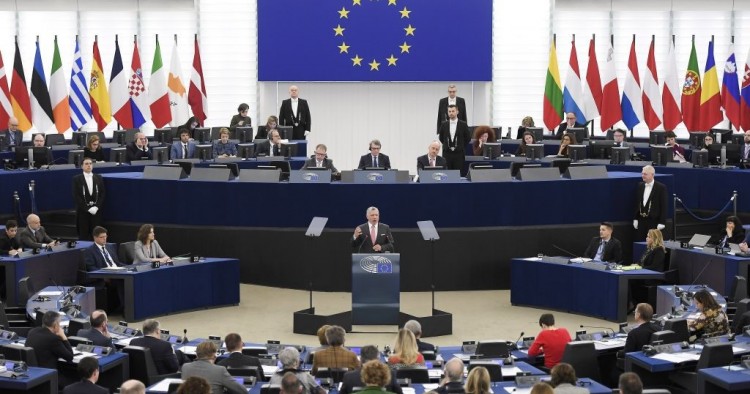 This year could mark a turning point in the European Union’s relations with the countries of the MENA region. Newly elected EU high officials like the president of the European Council, Charles Michel, or the president of the European Commission, Ursula von der Leyen, will have to decide whether the Union should play a more important role in the region or defer to other international actors like the Russian Federation or the United States. If the EU is to realize the objectives laid out in its 2016 global foreign and security policy strategy and become a major world power, it has to be more proactive and creative. When it comes to the MENA region, there are four main issues that EU institutions will have address in 2020: Israeli-Palestinian tensions, the future of the Joint Comprehensive Plan of Action (JCPOA) — as the Iran nuclear deal is officially known — and the EU’s relations with Iran more broadly, the conflict in Syria, and the civil war in Libya.

The Palestinian question will remain one of the most challenging issues in the region. The EU does not back the Trump administration’s recently released Middle East peace plan. Josep Borrell, the high representative of the EU for foreign affairs and security policy, criticized the American initiative, saying it “departed from the previous peace plans based on the two-state solution” and “does not meet internationally agreed parameters.” While Brussels supports the creation of an independent state of Palestine alongside the State of Israel, not all EU states are critical of the Trump plan and it has received backing from a handful of members. The Hungarian authorities, for example, supported the U.S. proposal, bucking the EU’s opposition. After speaking with Jared Kushner in Washington, the Hungarian minister of foreign affairs, Peter Szijjarto, even went so far as to say that “the plan was suitable for creating peace.” Poland also praised the American proposal. Jacek Czaputowicz, the Polish minister of foreign affairs, stated, “I commend the efforts of President Donald Trump’s administration aimed at resolution of the Israeli-Palestinian conflict. I took note of the unveiling of the political part of the peace plan. Together with its economic component, it constitutes a valuable basis for an in-depth discussion between the two parties of the Israeli-Palestinian conflict.” As these statements make clear, the Trump plan could become yet another divisive factor for EU members.

When it comes to Iran, it is very unlikely that the EU will change its policy in 2020. As long as the Iranian authorities do not trigger a crisis and or make any provocative gestures like the further enrichment of uranium, Brussels will not exert additional diplomatic pressure on Tehran. Furthermore, key EU institutions will attempt to strengthen their relationships with Iran to show dissatisfaction with Trump’s policy. Borrell has already invited the Iranian minister of foreign affairs, Javad Zarif, to pay an official visit to Brussels — in fact, in a particularly symbolic move, the invitation was extended at the peak of tensions between Iran and the U.S. at the beginning of January 2020. In this way, EU officials have tried to maintain balance between Tehran and Washington, instead of, for example, offering unconditional support for the U.S. The reason for this is that the EU has two priorities in its bilateral relations with Iran: The first is to save the nuclear deal and the second is to do whatever possible to bypass U.S. sanctions. But here too there are internal divides within the EU, and not all members are critical of the current U.S. approach toward Iran. Again, Hungary and Poland, alongside the Baltic states, support the American administration, as their governments are more committed to transatlantic relations and their own national security than they are to the EU’s official policy toward the MENA region. The U.S. military presence in Poland and the Baltic states will remain the key factor shaping their positions on American actions in the Middle East and elsewhere.

On Syria, the EU will maintain a multidimensional approach, including diplomatic, economic, and humanitarian aspects, in its response to the conflict, largely to avoid any potential migration crisis similar to that of 2015. The main principle of the Union’s strategy is to complement activities undertaken by its member states. The problem, however, is that the Syrian opposition forces, which have received support from various EU members, have little, if any, political influence in Syria. The EU has been highly critical of President Bashar al-Assad since the beginning of the conflict and, as a result, lost its diplomatic influence when it became clear that he would remain in power. The Russian Federation has emerged as the biggest winner from the political turmoil in Syria, and EU officials seem to accept the current status quo. Brussels is unlikely to play any significant role in the post-war reconstruction process in Syria either, especially following an American withdrawal. Under such circumstances, challenging Turkey and Russia would be counterproductive, so the only realistic option is to find convergent interests with Moscow and Ankara to have some influence.

In Libya, the EU remains engaged through its Common Security and Defense Policy missions and operations. In addition, the Union is the biggest humanitarian aid donor and an influential member of the Libya Quartet. EU high officials advocate a diplomatic solution to the ongoing conflict, although they support the internationally recognized Government of National Accord based in Tripoli. Their priorities are securing peace in the southern Mediterranean and avoiding any potential migration crisis. Libya’s sizeable oil and gas reserves are another important factor as well — and one of the reasons why the EU is concerned with the Turkish and Russian military presence in the country. Borrell has suggested that the EU could send a military mission to safeguard a cease-fire in Libya, a proposal backed by Italy and Greece in particular. The only question is if it is not too little, too late. Similarly to the situation in Syria, the EU is belatedly attempting to engage in the conflict in Libya, and only after Russia and Turkey have both already deployed troops.

The current geopolitical landscape could enable the EU to fully exploit its diplomatic potential in the Middle East. The EU’s new representatives have an opportunity to take unilateral actions and find their own solutions to the ongoing crises affecting the region. It is only by pursuing independent European initiatives that the EU will be able to realize the objectives laid out in its 2016 global strategy. Following America’s lead in the MENA region is no longer possible due to the growing divergence in interests. Although the situation may change after the coming presidential election in the U.S., EU officials will likely try to pursue their own policies when it comes to Israeli-Palestinian tensions, Iranian nuclear program, the Syrian conflict, and the war in Libya.