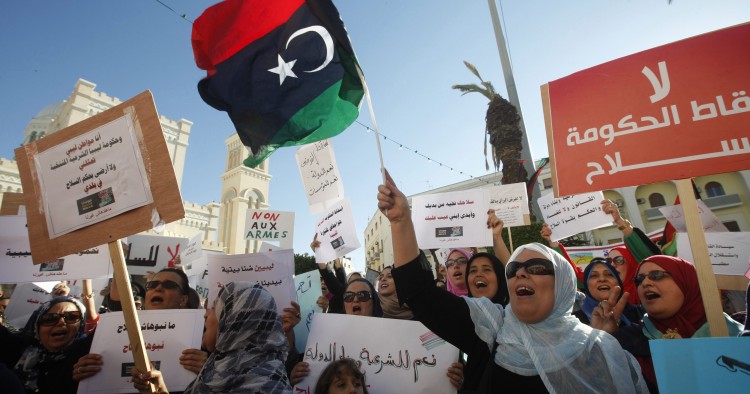 Libya is not a typical go-to place for research on civil society. For more than 42 years, this North African county was largely closed to researchers, activists and the media. Governed by an idiosyncratic and rather vicious tyrant, Libya was hardly an attractive cite for field-research. Yet, it is a stroke of good fortune that I, as a young doctoral student and with the help of Libyan friends, managed to conduct extensive research during multiple visits over the period 2011-2013 — acquiring a rich trove of information gathered from personal interactions with hundreds of Libyans eager to share their thoughts.[1]

This essay, which draws upon these interactions, seeks to shed light on an under-theorized area of research, namely the forces that challenge an emerging civil society during a political transition. In doing so, the essay makes two contributions to knowledge, first by arguing the value and inevitable role of civil society in a divided or conflict-ridden society, and second by helping readers better understand and unpack the case of Libya’s disrupted and dispersed civil society.

The Western literature on civil society mainly posits that it is a voluntary sphere of interaction comprised mainly of non-governmental organizations working on issues of public interest. But other strands of literature view civil society as a more dynamic term referring to groups, movements, and individuals that are civically or politically engaged.[2] For Libyans in 2011 these semantics did not matter. The reality on the ground was that Libyans had taken to the street and their leader had launched a violent response, killing civilian protestors and bombing entire neighborhoods.[3] As the Libyan uprising became more militarized, citizens had to organize. “In the early days of the revolution we worked on providing humanitarian support, advocating for the cause of the revolution, and mobilizing citizens to join the local protests,” explained one activist. [4] When citizens spontaneously organized themselves to support the revolution, they did not necessarily assign the label “civil society” to their actions. However, the functions they performed — resource mobilization, public discourse, and service delivery — are, by and large, civil society functions. While scholars continue to try to carve out a space for civil society whereby, at times, such a society would or would not include religious groups, what I saw in Libya was a much more fluid definition and understanding. Everyone was a member of civil society. In my research, I found that tribal leaders contributed to mitigating conflicts and to peace-building efforts during and after the revolution.[5] I explore the role that Islamic charities played in endorsing the demands of the rebels and in offering basic services, including food and shelter. I witnessed how the Libyan diaspora came together to fundraise for and directly assist in building new organizations. Before 2011 Libya had a handful of registered non-governmental organizations, including the Gadhafi International Charity Association headed by Colonel Gadhafi’s son, Saif Al Islam. Within merely a year, more than 3,000 groups registered as non-profit organizations and countless others had organized informally to work on the transition.[6]

There is a disconnection between what academics look for in defining civil society and what activists in Libya were constructing for themselves. During a conflict, such as the one that has now widened and become protracted in Libya, the choice that people make to actively disassociate themselves from polarized sides and work for the common good is what creates and fosters civil society. Though without titles and unknowingly, the activists that began working on relief efforts and later, on dialogue, were building Libya’s civil society. Between 2011 and 2012, the novelty of the activism scene had everyone calling themselves part of civil society. For the first time, Libyan legislators in the General National Congress boasted that they emerged from and supported Libyan civil society.[7] Libyan diplomats wrote about and praised the efforts of a newly founded civil society in Libya that was working on issues including women’s and youth empowerment. Media and donors rushed to the scene, seeking to support this new set of civil society actors. Through its initial debut, civil society was playing a significant, though untitled, political role. “International and local response and support for our NGO has been overwhelming, and people even want the activists to run in the next election, but I feel my role should remain nonpartisan so I can focus on educational programs in my area,” explains Abul Ozoum who runs the umbrella organization for civil society in Fezzan.[8]

How could an emerging civil society made up of so many diverse actors in Libya have played a political role by articulating such specific demands for dialogue and consensus building? In my research, I identified a set of individuals, organizations, and movements which sought to support the electoral and constitutional processes in Libya through engaging citizens and informing decision-makers. The demands were clear: for the legitimacy and representativeness of the electoral and constitutional institutions, a maximum number of Libyans from all walks of life had to participate.[9] Dialogue, workshops and writing became the three main avenues of engagement. A case in point was the work of the Forum for Democratic Libya (FDL), which spearheaded a grassroots dialogue on Libya’s new constitution. Reaching more than 15 locations in less than six months, FDL’s facilitators and volunteers gathered input from 1,400 citizens on what they hoped to see in the new constitution. The details of those demands, which included rotation of power, civil liberties, and fairness in resource distribution are of less importance. Instead, the process and tools utilized by FDL carry much more meaning. By choosing to create a public process of deliberating and stressing the importance of dialogue, FDL, among other actors and organizations, was making a clear political demand: to pursue dialogue as a means of engagement with others.

At the time of writing, the conflict in Libya has spread across its Western, Eastern and Southern parts. ISIS-affiliated groups have launched multiple attacks, killing and injuring hundreds. Among scores of activists killed are three women — Fareeha Barkawi, Salwa Bougaigis, and Intisar Al Hasiri — all of whom were assassinated and died of gunshot wounds. Fareeha was a veiled member of the General National Congress (G.N.C.) from Derna, who referred to herself as a supporter and admirer of, and collaborator with civil society. Salwa was a human rights lawyer and deputy chair of a national dialogue commission, to whom many civil society activists referred to as their “mentor.” Intisar Al Hasiri was a popular blogger, whose killing Libyan and international media reported as the murder of a “civil society activist.” The demands that these women were making were clearly above and beyond an associational sector or set of organizations; the demands were political. The events that followed show a faltering of dialogue at the national level that caused a rift in Libyan legislative, executive, and constitutional bodies that then plunged the country into its three-year violent conflict.[10] It seems that dialogue involving people from all walks of life was not in the interest of the leaders and armed groups that led the transition.

The widespread emergence of Libyan civil society carries three insights for an ongoing academic debate on defining and analyzing civil society. First, civil society is not a set of organizations, but rather is a space for people to meet, interact, and voice their priorities. For Fareeha, the priority was protecting civic space. Salwa cared for human rights. And Intisar focused on youth issues. Had I not been able to rethink what civil society means and constitutes, I might have missed including these women entirely in the category of activists.

Civil society is also a space for engaging the ‘unusual’ suspects. What emerging civil society actors in Libya succeeded in doing — namely, involving religious, tribal and community leaders — many civil society organizations neglect. Increasingly, civic spaces in the Arab region are dominated by formal liberal-type nongovernmental organizations (NGOs) that have little or no grassroots connections. This alienates key actors who can contribute to fostering civil society, especially in divided communities.[11]

Second, the portrayal of civil society as a distinct sphere of interaction removes political agency from the hands of activists. As my broader research reveals there is merit to the guise of civil society even for those actors who have a political stance. Hundreds of people who took part in my survey stated that they attended civil society meetings because it gave them a voice and a platform for taking action that they did not find in political parties or tribal structures. Political agency should be the primary locus of analysis when studying civil society groups.[12]

Lastly, academics conducting field work may or may not see the people they interview again, but there is a duty for researchers to relay insights from activists risking their lives to foster civil society. Academics should not shy away from the practical world, but should work on policy issues and speak to the communities that have a direct effect on the same issues that research seeks to explain. Empirical work, practice, trial and error, advancements, and set-backs in humanity are the very essence we seek to analyze and theorize. For me, Libya was and remains an eye opener in building rapport with multiple actors and in continuing to defend the need for civil society’s demands to be on the agenda in both transition and post-conflict situations.

[1] I rely on a wealth of data from interviews, focus groups, and action research in which more than 1,200 Libyans participated. Made possible through the activities and programs of the Forum for Democratic Libya (FDL) the research participants represent Libyans of all regions, tribal backgrounds, political affiliations, gender and age groups. Original data published in Carmen Geha, Civil Society and Political Reform in Lebanon and Libya: Transition and Constraint (London: Routledge, 2016).

[2] See for instance Francesco Cavatorta and Vincent Durac. Civil society and democratization in the Arab world: The dynamics of activism (London: Routledge, 2010).

[5] See Carmen Geha and Frédéric Volpi, “Constitutionalism and political order in Libya 2011–2014: three myths about the past and a new constitution,” The Journal of North African Studies (2016): 1-20.

[6] Database of registered civil society organizations, obtained by author from the Chairman of the Centre for Civil Society, list updated until July 2013.

[9] Forum for Democratic Libya, “Constitutional Briefs: Towards an Inclusive and Democratic Social Contract,” translated from Arabic (2013).