The United States, the GCC, and Iran: The Crisis that Wasn’t 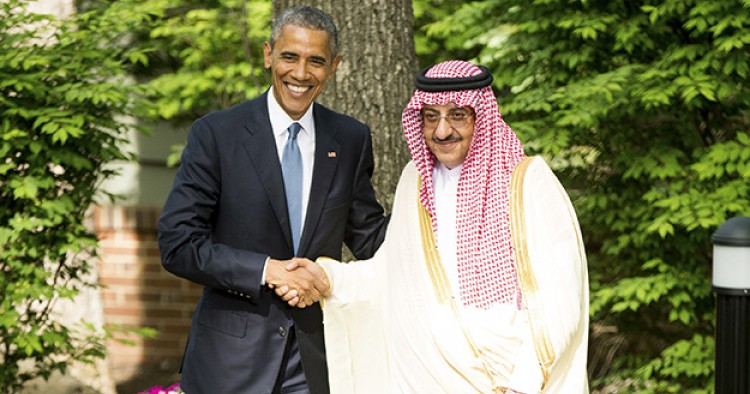 Whatever eventually comes of the security agreements and mutual pledges of support made at last week’s summit conference between President Obama and leaders of the Arab Gulf monarchies, one result is clear: Saudi Arabia and the others may not be enthusiastic about the pending nuclear agreement with Iran, but they will not actively oppose it.

All the shrill pre-summit reports of a serious breach between the United States and the Gulf principalities, all the heavyweight assessments saying that the Saudis in particular were fed up with Washington and would go their own way, were rendered moot in about 36 hours of talks at the White House and at Camp David. The summit appears to have been a substantial diplomatic triumph for the president. He gave the Gulf states a lot of robust verbal reassurance but little in the way of new commitments, yet that was enough to remove what could have been a formidable obstacle to his Iran initiative.

The joint statement issued by the United States and the representatives of Saudi Arabia, Kuwait, the UAE, Bahrain, Qatar, and Oman after the Camp David session was unequivocal: The participants “emphasized that a comprehensive, verifiable deal that fully addresses the regional and international concerns about Iran’s nuclear program is in the security interests of GCC member states as well as the United States and the international community.”

The president restated what he calls an “ironclad” U.S. commitment to the Gulf states’ security. But he did not issue any written guarantees, as some of the states had hoped, he did not elevate Saudi Arabia to the status of “Major Non-NATO Ally,” and he did not promise any specific new military action beyond a commitment to use “the means at our collective disposal, including the potential use of military force” to defend the Gulf states from external aggression.

The United States and the GCC countries stressed a commitment to work together on the region’s many conflicts and crises, including the war in Syria, the struggle against the Islamic State, and the disaster in Yemen. Washington also agreed to augment its assistance in maintaining maritime stability in the Gulf, reinforcing cybersecurity, and building the GCC’s missile defenses. In the aggregate, Obama promised the Gulf leaders more of the same, and while that may have been less than they hoped for, it appears to have been sufficient.

One reason for the reported unhappiness of some Gulf leaders has been their belief that Obama is so dedicated to nailing down the nuclear agreement with Iran that he would overlook or neglect what they see as Iran’s menacing interference around the region and its hegemonic ambitions. The joint statement issued at Camp David addressed that concern directly: “The United States and GCC member states oppose and will work together to counter Iran’s destabilizing activities in the region and stressed the need for Iran to engage the region according to the principles of good neighborliness, strict non-interference in domestic affairs, and respect for territorial integrity, consistent with international law and the United Nations Charter, and for Iran to take concrete, practical steps to build trust and resolve its differences with neighbors by peaceful means.”

Abdel Aziz Aluwaisheg, assistant secretary general of the GCC, told a Washington meeting after the summit that “The U.S. side made it very clear that they were aware of the issues that troubled us.” Obama, he said, “succeeded very well in putting those questions to rest.” Press commentary throughout the region, which reliably reflects official opinion, was similarly laudatory. And as the veteran Middle East analyst Hussein Ibish put it, the Saudis and the others “seem[ed] increasingly receptive to the Obama administration’s arguments that an agreement, while not perfect, may be the best available arrangement, and will be tougher on Iran than most reports suggest.”

If the Saudis and other Gulf leaders were so unhappy with the United States and Obama before the meeting, why were they satisfied with pledges of support that basically restated longstanding U.S. policy?

One reason is that Obama made clear that he is committed to seeking a nuclear agreement and more constructive relations with Iran and would not be deterred by anxiety or petulance among the Gulf Arabs. He left them with a choice between going along and making an open break, which none of them is in a position to do. Indeed, the outcome reflected a reality confronting Saudi Arabia and the others: They need the United States more acutely than the United States needs them and therefore they have very limited leverage with Washington. They are heavily dependent on the United States for their security, and they would gain little from the few overt actions they could take, such as expelling U.S. military forces from bases in the region. And the United States has a dwindling need for Gulf oil. Since 2009, the major importer of oil from Saudi Arabia has been China, not the United States, which gets most of its oil from domestic sources and from Canada and Mexico.

In Saudi Arabia, the United States trains and equips the principal domestic security forces, the National Guard and the new Facilities Security Force. Washington and Riyadh have worked closely for years on issues such as counterterrorism, funding of extremist groups, cybersecurity, and missile defense. The United States has troops and ships all across the region, from Incirlik in Turkey to Djibouti in the Horn of Africa, that are there to protect its friends, including Saudi Arabia.

Crown Prince Mohammed bin Nayef, who led the Saudi delegation, is well regarded in Washington and has no incentive to sever the ties he has built with American officials. He and Foreign Minister Adel al-Jubeir, until recently ambassador to the United States, know the U.S. political scene well enough to understand that any written mutual defense agreement that would commit the United States to military involvement in Saudi Arabia would not be approved by Congress.

So the crown prince took what he could get and refrained from asking publicly for what he knew he could not get. As has happened often in their seven decades of security partnership with Washington, the Saudis recognized that they are not in a position to walk away. For Saudi Arabia, the relationship with the United States survived President Truman’s recognition of Israel in 1948, was rebuilt quickly after the Arab oil embargo of 1973-74, and remained in place after the United States ignored the Kingdom’s pleas and invaded Iraq in 2003. Judging from last week’s events, it will survive whatever deal the United States and its partners reach with Iran.