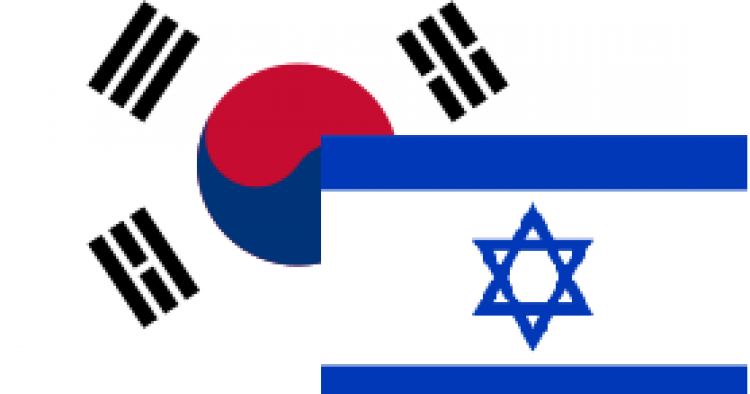 A short time after the outbreak of the Korean War (1950-1953), the United Nations Security Council called upon member states to provide assistance to counter the North Korean attack.[1] This request sparked a debate in the Knesset between extreme left-wing Israeli political parties, which insisted that Israel should support North Korea, and the center and right-wing parties, which favored support for South Korea. Ultimately, the Israeli government decided to declare official support for South Korea and to send food and medicine but not military forces.[2] Korea never again became the focus of a political debate in Israel, and it was not until the 1990s that the Israel-South Korea relationship began to flourish. Despite considerable progress in the development of the relationship since then, however, its full potential has yet to be realized.

The Beginning of a Constrained Friendship

In 1962 Israel established diplomatic relations with South Korea and opened an embassy in Seoul. For many years, however, Israel-South Korean relations remained very limited. For many years, Seoul was concerned about the possible implications of the Arab boycott on South Korean companies if they traded with Israel. One political indicator of South Korea’s low-profile relations with Israel was Seoul’s decision not to open an embassy in Israel. From the Israeli perspective, South Korea in those years was neither a political nor an economic asset: trade between the two states was very limited, and Seoul was both unwilling and unable to advance diplomatic relations with Israel.[3] These were some of the reasons that led Israeli Foreign Minister Moshe Dayan to order the closing of the Israeli embassy in Seoul in February 1978.[4]

The inception of the Middle East peace process in the 1990s improved the regional economic environment and diminished South Korean fears of the Arab boycott. The peace process projected to the world that Arab countries were willing to accept the State of Israel and would not object to other nations developing economic relations with Israel. The peace process was, in fact, one of the most important factors leading to the advancement of political and economic relations between South Korea and Israel.[5] Other important factors were the mutual recognition of potential economic gain from technological cooperation and Seoul’s realization that it could not ignore Israel, one of Washington’s allies.

Thus, a series of positive developments in Israel-South Korean relations ensued. In 1992, the Israeli embassy in Seoul reopened and South Korea opened an embassy in Tel Aviv. Economic and military trade began to blossom, as concerns regarding the Arab boycott abated. Even cultural relations improved. The success of Korean TV dramas in Israel since 2006 has exposed many Israelis to Korean culture, while the penetration of Korean high-tech goods and improved branding of South Korean products have enhanced Israeli perceptions of Korea.

The Economic Potential – More to Be Done

The growing economic strength and political influence of Asian countries, including South Korea, has led the Israeli government and Israeli companies to build stronger ties with them. Conversely, Israel’s economic dynamism and cutting-edge technology has attracted Asian, including South Korean partners. Samsung and LG, for example, have opened research centers in Israel.[6] Since the late 1990s, trade between the two countries has climbed steadily, exceeding $2 billion. [See Figure 1.] However, there is potential for far greater growth in trade. 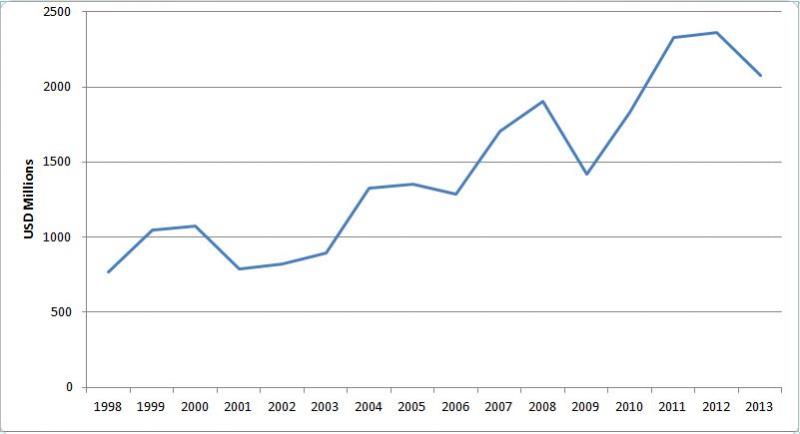 Consequently, for the past five years the Israeli government has been pushing for a Free Trade Agreement (FTA) with South Korea. Seoul, however, is cautious about concluding an FTA with Israel before doing so with Israel’s Arab neighbors, fearing the possible negative political and economic repercussions.[7]

Meanwhile, Israeli industries, especially hi-tech companies, anxiously await the conclusion of an FTA, which they regard as a catalyst for boosting South Korean investments in nanotechnology and green tech startups and industries in Israel, and for advancing Israel’s trade with South Korea and with the latter’s other trading partners.[8] As Israeli Deputy Foreign Minister Danny Ayalon stated in 2012 during his visit to South Korea: “A free trade agreement between Israel and Korea, I believe, will help us bring bilateral trade to double in a very, very short time,” adding that with an FTA, bilateral trade could reach $10 billion in 5-10 years.[9]

The Israeli market is small but important to South Korea. In remarks delivered at the Israeli Chamber of Commerce on May 5, 2010, South Korea’s Ambassador to Israel Young-Sam Ma stated: “We see great potential in cooperating with Israel in the development of new technologies and purchasing new Israeli technologies.”[10] The Korea Israel Research and Development Foundation (KOIL-RDF), which supports joint R&D between Israeli and Korean companies, is yet another example of economic potential. Since its establishment in 2001, KOIL-RDF has supported 130 joint R&D projects.[11] An FTA between Israel and Korea will expand the potential for joint R&D funding.

South Korea’s FTAs with the United States and Europe give companies from those geographies advantages over Israeli companies. Israel hopes that an FTA with Korea will improve the prospects of Israeli companies in those markets.

Security Relations and the Common Enemy

Security relations between Israel and South Korea are multi-layered. The first layer is their common threat: North Korea. Israel perceives North Korea as an indirect threat to its national security. During the 1973 War, North Korean pilots fought with the Arabs states against Israel. Since 1991, North Korea has sold missiles (Scud B, Scud C, Scud D) to countries in the Middle East that pose a direct threat to Israel.[12] In addition, North Korea has cooperated with Iran on upgrading and developing its missiles industry and nuclear capabilities. Pyongyang also assisted with the development of Syria’s nuclear program. Soon after its discovery, Israel attacked and destroyed the Deir ez-Zur nuclear site in Syria,[13] thus sending a clear message to all adversaries in the Middle East and even to North Korea that it will not permit the development of nuclear weapons that might threaten its security.

From the Israeli point of view, security relations with South Korea will not only advance bilateral intelligence and military cooperation, but also promote trilateral cooperation with the United States, thereby helping to prevent North Korean breaches of nuclear and missile proliferation which endangers Washington, Seoul, and Jerusalem.

The second layer is the security-based economic relations between the two countries. Israel has a well-developed defense industry with products proved   successful in combat. Military solutions offered by the Israeli defense industry could assist South Korea in coping with some of the threats emanating from North Korea. For example, after the North Korean shelling of Yeonpyeong Island on November 23, 2010, Seoul decided to purchase the Israeli Spike non-line-of-sight (NLOS) missiles.[14] Likewise, the three North Korean unmanned aerial vehicles that crashed in South Korea (March 2014) led Seoul to consider purchasing the Israeli radar system.[15] Seoul is also considering cooperating with Israel on developing a missile defense system.[16] These examples demonstrate the economic potential of security cooperation.

The Israeli defense industry also has the experience of long-term cooperation with the United States, which gives it an advantage over other countries because the U.S. forces in Korea prefer military systems that can be identified as friends (not foes) by U.S. equipment. But, although Israel and South Korea are both U.S. allies, Washington has its own economic interest in South Korea, which limits Israel’s ability to sell military equipment to South Korea. Israel must obtain approval from Washington before selling any military equipment that includes American components. When Israel tries to sell its Elta Phalcon AWACS system, Washington withheld approval in order to convince Seoul to buy American and not Israeli equipment.[17] One of the ways to bypass this barrier is to cooperate with an American company in a joint contract by adding Israeli components to the military equipment that is sold to South Korea.

Could Seoul Deliver as a Middle Power?

In a May 2014 essay, Professor Ji-Hyang Jang questioned whether Seoul has the motivation or the ability to be an active middle power player.[18] This is the same question that Israel has been asking regarding Israel-South Korean relations: could Seoul play an active role in the Middle East peace process as part of a peacekeeping force and use its economic power as leverage over the countries of the Middle East?

During the past two decades, South Korea has become more involved in the international arena by joining global and regional organizations and participating in peacekeeping operations around the world, including the Middle East. The Korea International Cooperation Agency (KOICA), for example, started building educational, occupational and medical facilities in the Palestinian Authority. These activities are indicative of a change in Seoul’s foreign policy in the Middle East. But although South Korea enjoys the benefits of being an impartial regional player, meaning that none of the Middle East countries perceives Seoul negatively or questions its interests in the region, South Korea prefers for the time being not to be a more active player in the region out of concern that such a role might endanger its economic relations.

Israel believes that South Korea could contribute more to the peace process by building economic and cultural bridges between Israel and the Palestinian Authority.  Seoul could play a constructive role not only in the Israeli-Palestinian peace process but also in the rebuilding of other countries in the post-Arab Spring Middle East. Israel should consider encouraging South Korea to increase its involvement in the Middle East peace process, but it must understand that South Korea will not “tilt” in favor of Israel; for example, Seoul will not agree to use its trade with Iran as leverage to increase pressure on Iran regarding the latter’s nuclear program unless obliged to do so by Washington or by a United Nations Security Council resolution.

Over the years, Israel has come to recognize South Korea as being of increasing importance to its economic, security, and diplomatic interests. Yet, the fact that Seoul is constrained by its economic interests in the Arab world has caused Israel to proceed cautiously in seeking to upgrade official relations with South Korea. Meanwhile, South Korean industries, eager to tap Israel’s technologies, have pressed forward; their enthusiasm for collaborating with their Israeli counterparts could, in the long run, foster a change in Seoul’s official policy toward Israel.

[1] The Korean War began on June 25, 1950, when North Korean forces, crossing the 38th parallel, invaded the South. The official North Korean narrative, however, is a little different. It describes the war as an attack by U.S. imperialist forces on North Korea. The Research Institute of History, Academy of Sciences of the Democratic People's Republic of Korea, History of the Just Fatherland Liberation War of the Korean People (Pyongyang: Foreign Languages Publishing House, 1961).

[3] South Korea was admitted as a member of the United Nations in 1991. Until then, Seoul could not have supported Israel in the diplomatic arena even if it had wanted to.

[4] The embassy was closed in 1978 for technical and not political considerations. Officials in the Israeli foreign office objected to the minister’s decision to close the embassy.

[18] Ji-Hyang Jang, “The Role of a Middle Power South Korea in Iran, Syria, and Egypt,” Middle East Institute, 23 May 2014, http://www.mei.edu/content/map/role-middle-power-south-korea-iran-syria…;