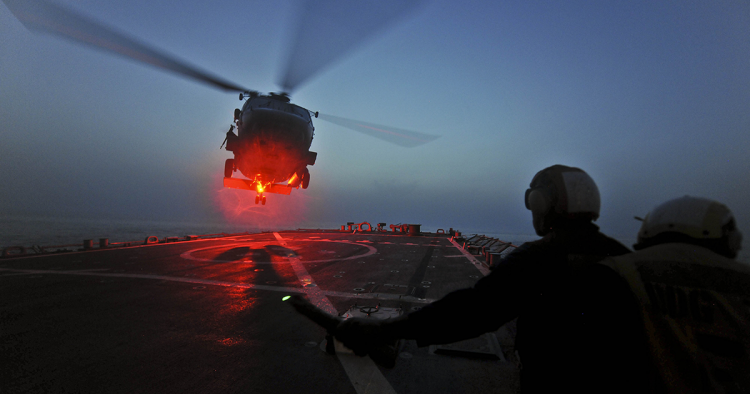 Even as the United States continues the strategic pivot to the Pacific inaugurated by the Obama administration, the competition for security and control of maritime space in the Red Sea and eastern Mediterranean is intensifying.

The Strait of Hormuz, the Suez Canal, and the Bab el-Mandeb have long been critical passages for the international economy. Indeed, Chinese warships first visited Hormuz in the early 15th century, and British control over the Suez Canal was the focus of London’s imperial strategy for almost a century.

In these critical regions, the recalibration of U.S. interests eastward is creating an opportunity for the reimagination of security strategies that has not existed since the Suez Canal was opened in 1869.

In addition, trade in energy and the international transport of goods are creating new alliances between Israel, Egypt, and Saudi Arabia; exacerbating long-term antagonisms between the U.S. and Iran; and leading Russia and China to advocate for new mechanisms for Red Sea-Gulf security, which would supplant America’s long-standing maritime hegemony over the region’s critical “choke points.”

For Israel, maritime concerns are at the heart of its national security. Egypt’s closure of the Straits of Tiran was one of the principal factors sparking the June 1967 war. Today, Israel’s energy investments in the eastern Mediterranean are proceeding in tandem with those undertaken by Cyprus, Greece, and Egypt — attracting wary attention in Tehran, Beirut, and Ankara and prompting the creation of new security doctrines aimed at securing energy investments.

For more than a decade, Iranian naval forces have been interested in securing freedom of movement for ships in the eastern Mediterranean to support its ally Syria. The Islamic Republic of Iran Navy (IRIN) has also actively asserted its presence in the Strait of Hormuz and secured maritime access to allies in Yemen.

These actions have prompted Israel’s navy to “exponentially” step up its activities in the Red Sea.

“The State of Israel will protect its freedom of navigation across the globe,” stated Vice Adm. Eli Sharvit, the country’s just-retired Navy commander. “We have increased our presence in the Red Sea most significantly. We are operating there continuously with main ships, that is to say missile frigates and submarines. What in the past was for relatively short periods of time is now done continuously.”

Egypt is also developing a sea-based infrastructure to secure its considerable investments in gas supply and transport in the eastern Mediterranean. In 2016, Cairo took delivery of two Mistral-class warships from France, which were originally ordered by Russia in a $1 billion deal that collapsed after the annexation of Crimea in 2014.

The acquisitions provide "advanced capabilities in confronting terrorism within our borders and on our shores,” explained then-Minister of Defense Sedki Sobhi. "It increases our combat capabilities and our ability to carry out long-term missions at sea."

Naval modernization is the flip side of a wide-ranging upgrading of Egypt’s “blue economy,” headlined by improvements and expansion of the Suez Canal and associated trade and manufacturing along the country’s 3,000-km coastline.

Egypt’s 2016 decision to return the islands of Tiran and Sanafir to Saudi sovereignty reflected the reorientation of its maritime policy in the Mediterranean and a corresponding expansion of Saudi interests in the Red Sea — prompted by the war in Yemen.

As a consequence, Saudi Arabia has formally succeeded Egypt as the guarantor of free Israeli passage to Eilat through the Straits of Tiran and host to the small Multinational Force and Observers (MFO) contingent based in Tiran. More broadly, the changes in the structure of maritime security in this vital waterway reflect a nascent and growing convergence of interests between Israel and Saudi Arabia.

The Biden administration seeks to make Washington “the partner of choice” in a yet-to-be defined regional maritime strategy that is part of a Global Posture Review.

In anticipation of this wide-ranging review of U.S. interests, Chief of Naval Operations Adm. Mike Gilday explained that, “First and foremost, the CENTCOM AOR [Area of Responsibility] is a maritime AOR. We have three major chokepoints: the Suez, the Bab el-Mandeb and the Strait of Hormuz. … Oil, for example, is a global commodity. And though the U.S. is much less dependent upon foreign oil than we were years ago, if there’s any perturbation in the Strait of Hormuz or in the Bab el-Mandeb or in the Suez, we’re going to feel that ripple effect back here at gas stations. The Chinese are operating in that AOR, the Russians are operating in that AOR. We have a responsibility there to compete there in the level below armed competition and be able to assure our allies and partners that we’re there for the right reasons: to help them to maintain [a] healthy global economic posture.”

For years, Russia has labored without success to win consideration of a Helsinki-like dialogue and the creation of a collaborative security framework in the region where the U.S. has traditionally been dominant.

In a joint press conference with Qatari Foreign Minister Mohammed bin Abdulrahman al-Thani in Moscow on Sept. 11, Russian Foreign Minister Sergei Lavrov explained that, “Russia advocates a constructive and unifying agenda for this strategic region. We believe that it needs mechanisms that would enable all the concerned countries to come up with collective responses to various risks and threats.”

Measures proposed by Moscow include: the strengthening of the dialogue between military institutions, the coordination of military aviation flights, the admission of observers to military facilities, transparency in the purchase of weapons, barring of military assets of external countries in the Persian Gulf, and the reduction of the foreign military presence in the region.

Beijing can cite no less a figure than President Donald Trump, who suggested that China, as the largest importer of Gulf oil, should assume maritime responsibilities consistent with its economic interest. China, however, never planned to tailor its security agenda to Washington’s tastes. Instead, it proposed a “five-point initiative on achieving security and stability in the Middle East” that mirrors the Organization for Security and Cooperation in Europe (OSCE) paradigm.

Those looking for a coherent and considered U.S. strategy, including a reconsideration of the deployment of a carrier strike group in the Gulf, await the adoption of the Global Posture Review early next year. In an increasingly polarized international environment, the Biden administration can be expected to maintain its longstanding effort to reign supreme, if not unchallenged, in the Gulf and beyond. In contrast to the past however, no one is waiting for the white smoke to rise from the White House.