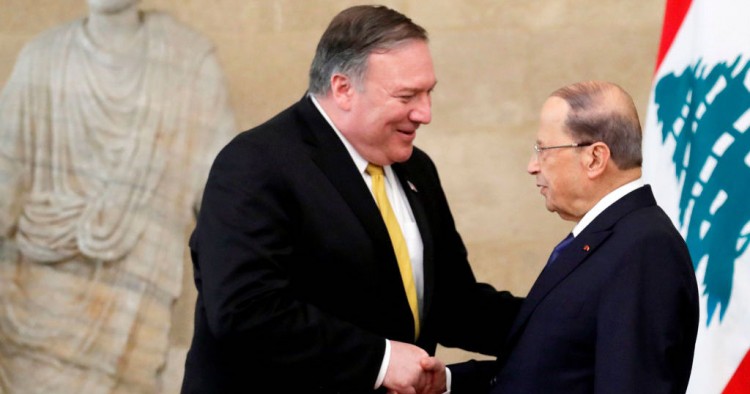 Amid an unprecedented political, economic, and financial crisis and the emergence of a new threat from the global coronavirus pandemic, Lebanon needs all the help it can get. The U.S. has long been an important source of assistance, and yet, as conversations with officials in both Beirut and Washington make clear, the argument for halting U.S. aid to Lebanon seems to be gaining ground. Long-standing concerns over Hezbollah’s influence in the country have only grown under the new government of Hassan Diab, while the Trump administration increasingly views regional policy through the lens of its “maximum pressure” campaign targeting Iran and its proxies. Washington’s concerns are legitimate, but Lebanon is not yet a lost cause and the U.S. needs to remain invested for the long haul. Disengaging would only create space for other powers like Russia and China to take on a greater role.

Lebanon is a major recipient of U.S. aid, especially military assistance, receiving a total of $725 million in 2018, according to USAID figures, of which 71 percent was economic and 29 percent military aid. Since 2006, the U.S. has provided more than $1.7 billion in total military assistance to the Lebanese Armed Forces (LAF), aimed at strengthening the only state institution that is respected by all camps, sects, and sides in the country.

U.S. support has helped to improve the capacity and professionalism of the LAF, making it a force capable of fighting ISIS and other extremist groups. Investing in the LAF also undercuts Hezbollah’s raison d’etre: If the Lebanese military is strong enough to defend its borders from Syrian or Israeli aggression and occupation of lands on its own, Hezbollah will no longer have an excuse to retain its weapons. It may not be there yet, but the LAF has made substantial progress in the past 15 years. It’s a slow, steady process though, and patience in Washington is limited, especially under the current administration.

According to one senior State Department official, “It’s time for people to reevaluate this notion that Lebanon will be protected from the international community from a complete collapse.” Speaking last month, U.S. Assistant Secretary of State for Near Eastern Affairs David Schenker, who says that U.S. aid will continue and that it does not benefit Hezbollah, noted, “Certainly there are detractors of the funding program in the United States government, in the Congress.”

It is not in Washington’s interest to let Lebanon fall apart, but at some point it will need to draw a red line when it comes to Hezbollah and enforce it. “Many are saying that Lebanon is already lost and that we’ll come back later once the circumstances change,” the senior State Department official said.

While this isn’t the first time Lebanon has found itself in a situation like this, things are different this time around because of the Trump’s administration’s intense focus on Iran and the stepped-up cooperation of European and other countries as part of its maximum pressure campaign. Even countries as far afield as Central and South America are coming onboard with efforts to label Hezbollah as a terrorist organization and comply with U.S. sanctions.

The need for diplomacy and pressure

Change may be in the works, but any new policy toward Lebanon must not be short-sighted. Diplomacy is key and the U.S. should continue to increase the pressure on Lebanese officials for a change in behavior and administration. Unfortunately, much of the Lebanese ruling elite is still in denial, so the U.S. should continue to turn up the pressure while making sure that Lebanon’s security bodies — especially the LAF — do not collapse, as they did in Iraq.

Lebanon has long relied on foreign aid, mostly from the Gulf, but this has enabled the country to kick the can down the line without resolving its underlying problems. Reforms were never required and it was rarely, if ever, held accountable for disappearing funds and a lack of results.

Things must be different this time around. Conditional aid is imperative.

The only way to prevent an economic meltdown is by removing the handful of leaders that have run the country for decades. This will require diplomacy and the steady application of pressure. They must feel the pinch, which so far they’ve managed to avoid, without pushing the country over the edge.

Hezbollah and the LAF

While an economic collapse would surely weaken Hezbollah given how deeply engrained it is in Lebanese society now, the damage would not be fatal. Like Iranian proxies elsewhere in the region, the group thrives in chaos and would doubtless find new opportunities to exploit.

The biggest mistake though would be to make a decision that jeopardizes the credibility or capacity of the security sector, especially the LAF. If the Trump administration’s aim is to force a popular revolt against Hezbollah — by the Lebanese people — this is sure to fail. In conversations at the highest levels of the U.S. administration, including National Security Council meetings, Lebanese officials have made it clear that the LAF would do nothing of the sort. Testifying in Congress late last year, Jeffrey Feltman, the former U.S. ambassador to Lebanon, said, “Some in Washington may ask if the Lebanese Army should now prepare to confront Hezbollah kinetically and disarm Hezbollah by force. That would be a recipe for civil war,” he said, adding that the U.S. needs to think more long term.

If not the US, who else would step in?

It is no secret that Riyadh and Abu Dhabi are not interested in Lebanon at the moment. It’s also no secret that Russia and China have been expanding their role in the region of late, pouncing on any areas left behind by the U.S. While both countries have their own domestic issues to deal with right now, from economic troubles to the impact of coronavirus, Lebanon’s strategic location and the opportunities offered by its nascent oil and gas sector are strong motivators.

Indeed, there are already signs of growing interest. One of Russia’s biggest natural gas companies is part of a consortium that recently won a tender to explore potential offshore reserves, which could be substantial given the discoveries in nearby eastern Mediterranean waters since 2009. Separately, and perhaps more significant, Russia’s Rosneft signed a 20-year deal with the Lebanese government, allowing the company to expand and operate oil storage facilities near the border with Syria.

China too has been increasing its involvement in Lebanon. Huawei signed an MOU with the government on Oct. 17, 2019 to launch an ICT training program for university students, known as the Seeds for the Future Program. Infrastructure has been another focus for Beijing as well: Huawei offered to install high-speed internet at the Beirut airport last year and China has reportedly proposed revamping the country’s rundown railroad system.

Lebanon is not yet a lost cause but the U.S. needs to realize that there are no quick fixes and investing in the country is a long-term proposition. But if Washington does decide to halt aid to Lebanon and disengage, even temporarily, it will present a clear opportunity for countries like Russia and China that are all too willing to step in and fill the vacuum left behind.

Joseph Haboush is a non-resident scholar at the Middle East Institute and a Middle East reporter for The Telegraph. He was previously the Lebanon & Online Desk Editor at The Daily Star. His work primarily focuses on Lebanon and Syria. The views expressed in this article are his own.

Decentralization in Lebanon is not neutral