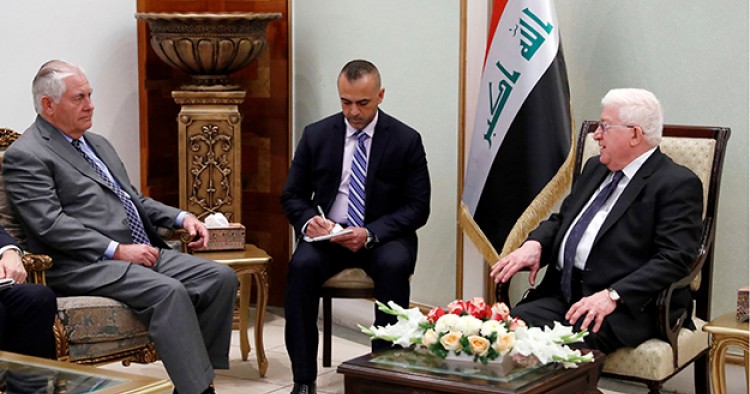 The sudden resignation of Massoud Barzani as president of the Kurdish Region of Iraq (K.R.I.) casts into high relief the challenges that confront U.S. policy in the region today. Focused military action has set ISIS on its heels. Chairman of the Joint Chiefs of Staff General Joseph Dunford, U.S. Marine Corps has opined that ISIS will be defeated “when the threat of external operations is extinguished, the group is controllable through local law enforcement and national security forces, and they no longer control territory.” For Iraq, Dunford envisions a role for U.S. forces in training, advising, and assisting the Iraqi Security Forces (I.S.F.) to accommodate the return of internally displaced persons.

Militarily, Dunford’s remarks make sense. But, understandably, his remarks stand apart from the broader strategic questions that U.S. policymakers must answer in achieving favorable political outcomes in Iraq and the broader region. What do those outcomes look like and what obstacles stand in the way of achieving them?

The outcomes sought include inter-ethnic and inter-confessional reconciliation; a viable long-term Iraqi constitutional order; and an Iraqi contribution to stability in the broader region over the long-term. Four confluent strategic goals arguably contribute to achieving these outcomes:

Obstacles in this complex political environment include the inherent dynamics of a war-torn nation populated by diverse ethnic groups pursuing diverse, often competing agendas; uncertain Iraqi leadership; bitter feelings among non-Shiites toward the Shiite-dominated central government; the immensity of the challenge in rebuilding Iraq while achieving ethnic reconciliation; and Iranian efforts to control Iraqi politics.

Three Iranian proxies are increasing their influence in Iraq and have united to field candidates for the April 2018 elections. As each has pledged fidelity to Iran, none feels necessarily bound to heed Iraqi central government directives. These forces, with their combined military and political clout as well as credibility in Baghdad and southern Iraq, pose a threat to Iraqi independence and the advancement of U.S. security interests in Iraq described previously. Who are these players?

Asaib Ahl al-Haq (the League of the Righteous), also known as the Khazali network, appears to be the lead Iranian proxy. Designated as a “Special Group” during the 2003 war for its violent extremism, it is trying to rebrand itself as a nationalist Iraqi political organization and a champion of the Shiite community. Like Hezbollah in Lebanon, it employs social services and religious indoctrination through a network of religious schools called the Seal of the Prophet to spread influence and to recruit. Its goals include displacing the Sadrist Movement which does not align with Ayatollah Ali Khamenei or the Islamic Republic’s doctrine of Guardianship of the Jurist. It also rejects the “quietest” school epitomized in Kharja by Ali al-Sistani, whose views clash with Iran’s.

Kata’ib Hezbollah (Battalions of the Party of God), led by Jamal Jaafar Ibrahimi, works in tandem with the Khazali network and has owed fidelity to Iran. It has asserted itself by opposing the demobilization of the Popular Mobilization Forces, comprised of Shite militia and has opposed cooperating with the United States against ISIS.

The Badr Organization is the political successor to the Badr Brigades, and is led by Hadi Al-Amiri, whom the United States managed to block from becoming Iraq’s minister of defense or interior—although open source reporting indicates that the Badr Organization wields major influence in the interior ministry. The Badr Organization holds 22 seats in Parliament. Despite its conciliatory posture, it forms the third element of the Iranian triad that seeks to exercise a controlling influence over Iraqi political affairs.

Iraqi Prime Minister Haidar al-Abadi has been hamstrung due both to his own actions and to cross-pressure from competing forces in Iraq. Abadi was able to finesse Iraq’s internal political dysfunction somewhat while ISIS posed a battlefield threat. He also showed good judgment in limiting the role of Shiite militias in the attacks on cities such as Mosul. Now, however, Abadi cannot avoid dealing with the longer-term political ramifications of the conflict. Because both Abadi and his predecessor, Nouri al-Maliki, failed to offer Sunni Arabs and Kurds a real stake in Iraq’s new constitutional order, those parties’ frustration was already boiling over prior to the resurgence of civil war. The conflict only exacerbated matters. Sunni cities such as Fallujah, Ramadi, and Mosul were destroyed. With central power having broken down, tensions with the Kurds, the most reliable allies of the United States in the region, and the Sunni Arabs were bound to explode once the conflict abated.

Although Barzani’s September 25 referendum divided Kurds, the results, as the Middle East Institute’s Randa Slim has pointed out, show that the majority of Kurds want an independent state. Far from resolving Iraq’s constitutional challenges, sending the I.S.F.—supported by Shiite militias aligned with Iran—to seize the oil-revenue-producing Kirkuk oil fields will only deepen the deadlock and further alienate Kurds from the central government.

One can argue that Abadi had to seize Kirkuk, with its oil resources. Yet both sides acted clumsily. Abadi failed to communicate effectively to the Kurds that they could have a real stake in Iraq’s future and its central government. Barzani clearly understood that once ISIS was defeated, the Shiites would turn on them to unify the state under Shiite leadership. Barzani’s gambit to gain U.S. support for Kurdish independence failed and arguably his resignation represented a sacrifice to avoid major combat.

The United States drew a lesson from the destruction wreaked upon Fallujah during the April and November 2004 battles for that city. Destroying Sunni homes and neighborhoods in order to save them was, putting it mildly, counter-productive. Enormous care was taken to avoid a repetition when Ramadi was taken from insurgents. But, while Iraqi Security Forces tried to avoid civilian casualties in the current conflict, they lacked the sophisticated capabilities and resources that U.S. forces possessed in the earlier conflict. If Sunni civilians in Iraq do not receive financing from the central government to pay for the reconstruction of their cities as well as credible political assurances that give them the prospect of a meaningful stake in Iraq’s future, the emergence of a successor to ISIS in Iraq seems inevitable.

The Kurds rightly do not trust anyone. Their situation is complicated by their internal political divisions, by the fact that their homeland spans the borders of three other countries (Turkey, Syria and Iran), and by the fact that their nationalist agendas directly affect the security interests of those countries. The contradiction between these aspirations for national self-determination and the security concerns of the countries in whose territories the Kurdish nation is located offers no easy solution, but regional stability requires one.

The fact that Iraqi politics can be chaotic and unpredictable further aggravates attempts to achieve long-term stability. The players include the Sadrist movement which surprised observers this past June by joining the National Coalition led by Ayad al-Allawi. The Sadrists are sectarian while the Coalition is secular. The National Coalition will compete against the National Alliance in the forthcoming elections. However, the National Alliance currently accounts for the largest bloc of votes in Iraq’s Parliament. This control of Parliament significantly reduces the National Coalition’s chances. Al-Abadi has said he will break with his party and form a “Liberation and Construction” party that will run independently of Nouri al-Maliki’s Islamic D’aawa party. A coalition of Shiite militias also plans to run candidates for Parliament. All this makes it difficult to predict how the forthcoming parliamentary elections will turn out, adding further uncertainty to the future contours of Iraq’s political environment.

U.S. strategic goals include the following: to facilitate a process of inter-ethnic and inter-confessional reconciliation; to build on that process by helping Iraqis to construct a viable long-term constitutional order; and to create the conditions required to achieve stability in Iraq’s broader region.

Tactical measures, such as mediating the immediate conflict around Kirkuk, are a prudent first step toward achieving these goals. But we must expand them to achieve longer-term strategic stability.

A viable constitutional order requires blocking any one group of stakeholders from imposing its will on the others. The United States should marshal support for the reconstruction from Iraq’s richer Sunni neighbors; U.S. taxpayers are unlikely to foot the bill. Even then, such assistance seems unwelcome. Iraq’s Sunni neighbors have a vital interest in stabilizing Iraq. They should be willing to bear the cost of helping reconstruction, if presented with a viable political path forward.

The United States owes a debt to the Kurds. They have borne the brunt of the fight against ISIS. They have served as the United States’ staunchest allies in the region. While the shape of any solution requires careful negotiation, the United States and its allies need to apply their leverage to help the Kurds achieve a positive result that is acceptable to all regional stakeholders.

Once local and regional stakeholders have bought in to a mutually acceptable long-term Iraqi constitutional order, the presence—with Iraqi government consent— of U.S. trainers, advisors, and assistants can serve as a guarantee of that order and can serve to discourage a relapse into internal conflict or renewed external interference.

At least 500 U.S. military deaths in Iraq and Afghanistan have been directly linked to Iran. Let’s make clear to the Iranian leadership and to Iranian-backed Iraqi Shiite militias that attacks by them on U.S. forces in Iraq will trigger unforgiving retaliation—both against the militias and against targets inside Iran. Since Quds Force commander Qasem Soleimani controls his proxies, one consideration might be to caution him that attacks by his proxies on U.S. troops may turn him and his leadership cadre into high value targets. Iran needs to understand that the United States will not tolerate an encore to Iranian behavior during the Iraq war or in Afghanistan.

Finally, the United States’ NATO and Asian allies must also step up. They are far more dependent upon access to energy resources from Iraq and its broader region than is the United States. They need to acknowledge their stake in restoring stability in the region over the long-term by providing appropriate support to the reconstruction of Iraq in consultation with the Iraqi government and regional partners.

The United States must define a political strategy to terminate the conflicts in Iraq, Syria and Afghanistan. The good news is that, for Iraq, a potential path forward does now exist. The U.S. should capitalize on this opportunity to restore stability to Iraq and to its broader region.