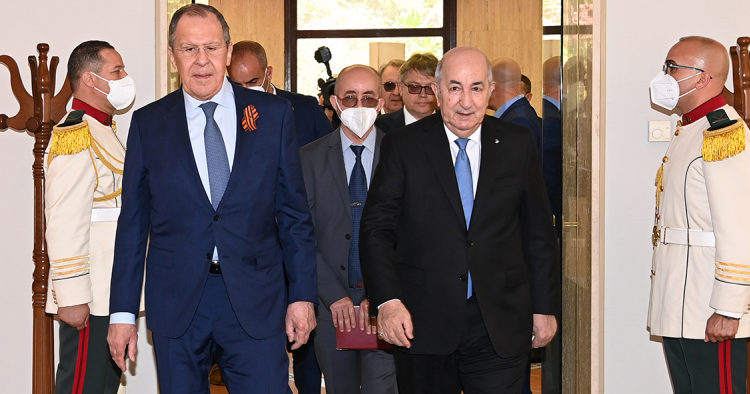 Russian President Vladimir Putin’s decision to invade Ukraine in late February could have unprecedented consequences for North Africa. Algeria will be swept up in the resulting shifts, forcing the country’s civilian and military leadership to make difficult international calculations.

Algeria abstained from voting on the United Nations resolution to condemn the war in Ukraine on March 2. Little more than a month later, Algeria joined Syria and 23 other member states in a vote against excluding Russia from the U.N. Human Rights Council. Some observers took these votes as a sign of Algiers’ support for Moscow’s geopolitical aspirations. Algeria’s recent positions, however, can only be understood in light of the country’s attempt to find the golden mean between siding with Russia and siding with Europe. Algeria has sought a middle ground between the Eastern and Western camps since independence in 1962. The newly independent state offered its mediation services and energy resources to the United States and Europe and sought to expand its security cooperation with Russia, maintaining its sovereign foreign policy stances. Algeria’s decision-making is now further complicated by the emergence of China as a major power. Understanding Algiers’ objectives requires an analysis of the various security, economic, and diplomatic dynamics at play.

Algeria’s post-independence political establishment cultivated strong military bonds with the Soviet Union and later the Russian Federation. This historical partnership provided Algeria with a continuous and preferential flow of military equipment with no end-user license agreement, and this later benefited the Algerian security forces when Western partners imposed an undeclared arms embargo during the 1990s. Between 2016 and 2020, Algiers spent approximately $34 billion on Russian weapons, cementing Moscow’s place as its primary arms supplier. Amid rising tensions with Morocco, maintaining these links with Russia is more essential than ever in the eyes of the Algerian military. In fact, reports indicate that the two armies will hold joint counterterrorist exercises in November 2022 on Algeria’s western borders. This is unsurprising considering the regional agreement between Algiers and Moscow on issues such as Western Sahara. Moreover, statements by Russian Foreign Minister Sergey Lavrov suggest that Algiers seeks to deepen its relations with Moscow in spite of the potential international backlash. This could raise concerns about Algiers’ willingness to gravitate toward Moscow’s strategic pole at the expense of other partners.

In recent years, the Algerian establishment’s approach to foreign policy has focused on avoiding major crises with international partners. Despite occasional hiccups and underdeveloped regional cooperation, Algiers has largely succeeded in its mission. Through this strategy, it developed a lucrative energy export market, geared toward southern Europe in particular, that helped to boost its foreign exchange reserves to almost $200 billion by 2012. Over the past decade, during a time of growing geopolitical disorder, Algeria has served as a stable and committed energy supplier for the Mediterranean. Following Russia’s invasion of Ukraine, this encouraged unrealistic expectations in the West about Algeria’s short-term ability to replace Russian gas now subject to a partial ban. The Algerian government fed this delusion in talks at the presidential palace with senior Western officials like U.S. Secretary of State Antony Blinken and Italian Prime Minister Mario Draghi. At the same time, the authorities have shown a readiness to cut loose European partners that oppose Algeria’s regional interests. During its recent dispute with Madrid over Western Sahara, Algiers suspended a two-decades-old friendship treaty. Hence, the country’s leadership may view the Ukraine war as a suitable moment to rehabilitate and strengthen its global standing, capitalizing on Europe’s desperate need for gas as it seeks to replace imports from Russia.

On March 20, Foreign Minister Ramtane Lamamra travelled to Beijing for a three-day visit. Since the signing of the 2014 “Comprehensive Strategic Partnership,” cooperation between Algiers and Beijing has extended beyond commercial activity into the realms of culture, politics, and the military. Against this background, Minister Lamamra’s trip concluded with a bilateral statement that rejected the “misuse of unilateral sanctions” while fast-tracking the Belt and Road Initiative. This announcement aligns with President Abdelmadjid Tebboune’s willingness to tolerate foreign debt for the sake of developing local infrastructure as well as his directive to focus on a $7 billion phosphate deal with China.

While joint projects could provide a momentary boost for Algeria’s economy, they also offer a window of opportunity for Chinese expansionism. Algiers has so far defended its “neutral” stance on the great power competition, reiterating its commitment to the non-alignment philosophy that has shaped its diplomacy since the Cold War. Still, Algeria today faces a new reality with international and domestic impediments that will determine the cost of its geopolitical choices. The circumstances, impact, and narratives around the war in Ukraine require an adapted doctrine in line with today’s events.

Following the Russian invasion of Ukraine, the Tebboune administration restricted its official response to the Arab League initiative that created a Ministerial Contact Group uniting Algeria, Sudan, Iraq, and Egypt. Minister Lamamra joined his counterparts in Moscow and Warsaw to meet with Russian and Ukrainian officials. Furthermore, Army Chief of Staff Said Changriha reiterated, in the presence of a senior NATO official, Algeria’s non-involvement in global conflicts. Changriha’s statement builds off of Algiers’ tried-and-true narrative about its foreign policy, but maintaining “diplomatic flexibility” may become increasingly difficult, especially if the war drags on through next winter. Despite the official rhetoric, the military and economic rapprochement of convenience between Algiers, Moscow, and Beijing is likely to turn into a strategic liability. This will be particularly true as the global battle for influence expands to regions like the Sahel and the Mediterranean. Moreover, the historical and post-colonial lenses through which Algiers perceives the West and the international balance of power could hinder the Algerian establishment’s regional interests and efforts to ensure domestic sociopolitical harmony.

Since coming to power in 2019, Tebboune has declared his intention to revive Algiers’ diplomatic corps and defend its national interests. The administration is convinced of its status as a “regional power” and has staked a claim to leadership over several dossiers, including Arab attempts at mediation between Russia and Ukraine. Yet this ambitious agenda cannot be achieved without an international consensus lead by the permanent members of the U.N. Security Council. The Western bloc’s blessing is not forthcoming, as cozy relations between Algeria and the Eastern camp are apt to be taken as a sign of geopolitical alignment. Moreover, the recent participation of Tunis and Rabat in NATO military talks on Ukraine undermines Algiers’ old assumptions about the security order in North Africa. The emerging strategic shifts, therefore, impose serious limitations on the current administration’s vision for both its immediate neighborhood and the region at large.

Defense and foreign policy issues have clearly captured domestic public attention because of regional tensions and the administration’s focus on its diplomatic posture. Traditionally, the Algerian establishment shaped the country’s international direction according to its desires and with little regard for criticism, capitalizing on the silence of elites and the disinterest of citizens. But the 2019 Hirak protest movement and generational changes will result in calls for more accountability on all levels, making the usual carte blanche a thing of the past. Thus, the policies of the Tebboune administration are likely to face greater scrutiny as the political elite and social actors re-evaluate Algeria’s international stances through a more pragmatic and inclusive strategic lens. As a case in point, the recent round of talks between President Tebboune and the local political class demonstrated an unusual focus on geopolitical developments. In view of the rapidly changing environment, a popular foreign policy would need to provide both stability and socioeconomic relief for the silent majority.

The war in Ukraine poses an unconventional test for Algiers’ sovereigntist and principled doctrine. It is safe to say that Algeria is interrogating itself about its regional and international roles, which implies a sober assessment of its needs and comparative advantages. Senior officials, including President Tebboune, have repeatedly referred to the emergence of a new post-COVID global order. Within this context, regional shifts and domestic consensus will determine the administration’s next steps. And while Algeria knows it cannot replace Russian gas, it is still seizing the opportunity to attempt to reform its outdated energy sector and to deliver diplomatic messages. Algiers’ response to the Ukraine war is to walk a fine line between Europe’s gas needs and Russia’s strategic orbit, which may facilitate energy deals, such as that recently signed with Italy. Such steps will not, however, guarantee that Algeria has lasting regional influence.

Finally, the misconceptions at home and misunderstanding abroad about Algiers’ “non-alignment doctrine” highlight a bigger debate regarding its foreign policy. This reflects the new diplomatic dynamics that will be “negotiated” with international partners in the context of the process of recovery from the era of former President Abdelaziz Bouteflika. While Algiers does not respond well to pressure, the continuation and deterioration of the war in Ukraine will force the Tebboune administration to make some hard choices. This will likely trigger an unofficial dialogue within the establishment in anticipation of Algeria’s 2024 presidential elections, and only a national agreement can prevent dangerous sociopolitical polarization and mitigate underlying geostrategic risks.

Zine Labidine Ghebouli is a political analyst, postgraduate scholar at the University of Glasgow, and research assistant with the North Africa and Sahel Program at the Middle East Institute (MEI). His work focuses on Euro-Mediterranean cooperation and Algeria’s political and security dynamics. The views expressed in this piece are his own.