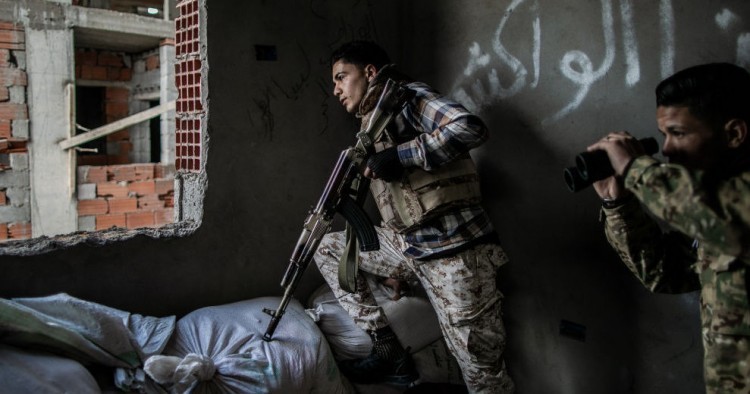 Leaders in Egypt, the United Arab Emirates (UAE), and Saudi Arabia share the view that the Arab Spring uprisings that shook the Middle East and North Africa (MENA) must be reversed. This counterrevolutionary Arab axis is working to bring the region back to the pre-2011 order, and its agenda in post-Gadhafi Libya is a salient example. Working closely with France and Russia, the axis has attempted to consolidate authoritarian rule in eastern Libya under Gen. Khalifa Hifter and his self-styled Libyan National Army (LNA).

Throughout Donald Trump’s presidency, the U.S. has largely retreated from a leadership role in the MENA region, resulting in Washington mostly outsourcing its Libya foreign policy to Egypt, Russia, and Washington’s partners in NATO and the Gulf Cooperation Council (GCC). Yet the U.S. diplomatic establishment is growing frustrated with the beleaguered North African country’s ongoing turmoil, as Washington increasingly sees Egypt and the UAE as undermining American interests in Libya.

Last month, the former U.S. ambassador to Libya, Deborah Jones, addressed recent developments in the country. After Egyptian President Abdel Fattah el-Sisi warned against Libya’s Government of National Accord (GNA) capturing Sirte and declared the town a “red line,” Jones responded by pointing out that Sisi did not consider Sirte a red line when ISIS occupied the coastal city a few years ago. She argued that the U.S. has a national security interest in ensuring that Libya does not spiral into further chaos, which could be the outcome from an Egyptian military intervention against pro-GNA forces.

Without a political solution, the result could be partition

Policymakers in Washington are aware that if there is no political solution to Libya’s post-Gadhafi crisis, the result could be partition — either formally or informally. If the civil war continues to rage without either side achieving a military victory, the conflict could possibly lead to pro-GNA groups taking de facto control of the country’s west while Hifter’s forces rule the east, without any central governing authority.

For a number of reasons, partition would likely be detrimental for Libyans themselves, as well as for the wider region, including African, Arab, and European countries. Tunisian President Kais Saied recently stressed in a press conference with his French counterpart that Libya must remain unified. The U.S.’s official position — and that of Turkey, Tunisia, Italy, and Qatar, plus the UN — is that the GNA is Libya’s sole legitimate government.

Moreover, there is a general agreement among experts that a smooth transition to post-conflict stability could not occur with Hifter in power. At the same time, a solution to the civil war probably cannot be reached through pro-GNA forces simply conquering all of eastern Libya by force. Instead, Libya’s Tobruk-based Parliament has to be negotiated with, which raises questions about which figure in the eastern bloc could represent the House of Representatives (HoR) other than Hifter himself.

As Turkey’s government sees it, HoR head Aguila Saleh Issa could serve as a negotiating partner and replace the eastern commander as part of a process aimed at bringing about a diplomatic solution to the civil war. “Haftar is a failed dictator and we have never recognized him as a legitimate actor,” said Emrullah Isler, Turkey’s special presidential envoy to Libya. “He won’t take a place in the future of Libya.”

Regardless of whether Issa or any other figure from the eastern side replaces Hifter, replacing him does seem to be a prerequisite for resolving the nightmarish conflict. Accused of war crimes amid his quest to topple the UN-recognized government, Hifter has much baggage in Libya, especially in the Tripoli area and other parts of the country, making it essentially impossible to imagine him reconciling with Libyans who have been fighting the LNA since 2014. Additionally, based on his record of violating past truces (at least as maintained by the GNA), there is little chance that Hifter could be trusted to abide by any future cease-fire.

If there is any hope for a settlement in Libya that can bring about peace, stability, and the preservation of the Maghrebi country’s territorial integrity, it will likely come in the form of the “Tunisia model.” As the Arab Spring’s “only success story,” Tunisia has provided an example of how Arab countries can transition from authoritarianism and dictatorship to democracy. Since 2011, the U.S. diplomatic establishment and various international organizations have generally viewed the Tunisian model as the best example for Arab states to follow.

Realistically, however, America’s Arab partners that have been pursuing counterrevolutionary agendas in Libya and elsewhere in the MENA region will work to prevent Libya from becoming an inclusive democracy along the lines of post-Arab Spring Tunisia. Rulers in Egypt, the UAE, and Saudi Arabia perceive democratic elections as an existential threat that could lead to the emergence of Islamist power centers. Their sponsorship of Hifter in the Libyan civil war aligns with their vision of making the Arab world a Muslim Brotherhood-free region, which in turn directly clashes with the U.S. diplomatic establishment’s advocacy of adopting the Tunisian model for Libya.

Possible implications of a Biden presidency

The Trump administration will probably not pressure these Arab states to soften — let alone abandon — their anti-democratic and anti-Islamist foreign policy agenda in Libya. Yet it is fair to ask how Washington’s approach to Libya’s crisis might change if former Vice President Joseph Biden is elected in November. A Biden administration would likely take a less friendly approach to these Arab powers and could put more pressure on Hifter’s supporters to comply with the arms embargo on Libya.

With polls showing Trump significantly behind Biden, Egypt, the UAE, and Saudi Arabia may try to take advantage of a narrowing window of time in which they have a U.S. president in power who is generally quite accommodating of their agendas. Under such circumstances, these Arab states may seek to maximize their pursuits in Libya and elsewhere for the remainder of 2020. However, such an approach could create problems between the Saudi-Emirati-Egyptian bloc and a possible Biden administration, reminiscent of the tensions that shaped U.S.-GCC relations during Barack Obama’s presidency.

By contrast, Turkey, Qatar, and Italy would likely welcome a Biden presidency that challenges the Arab region’s counterrevolutionary axis, as these states have perceived Hifter and his quest to overthrow Libya’s UN-recognized government as a threat. Ankara in particular has been attempting to bring its NATO allies — chiefly the U.S. — toward a more pro-GNA agenda that would counter Abu Dhabi, Riyadh, and Cairo’s actions in Libya.

After Trump entered the Oval Office in 2017, some of Washington’s Arab partners, including the UAE, began punching above their weight in pursuit of their objectives, as the situation in southern Yemen, post-Bashir Sudan, and the blockade of Qatar all attest. When considering the potential implications of a Biden presidency, a key consideration will be the possible success the new U.S. leadership could have in reining in the maximalist agendas of the Arab region’s counterrevolutionary axis.

Dr. Khalid al-Jaber is the Director of MENA Center in Washington D.C. Previously, he served at al-Sharq Studies & Research Center and as Editor-in-Chief of The Peninsula, Qatar’s leading English language daily newspaper. Giorgio Cafiero is the CEO and founder of Gulf State Analytics, a geopolitical risk consultancy based in Washington, DC. His research interests include geopolitical and security trends in the Arabian Peninsula and the broader Middle East. The views expressed in this article are their own.