What is Going on in Idlib between Tahrir and Ahrar al-Sham? 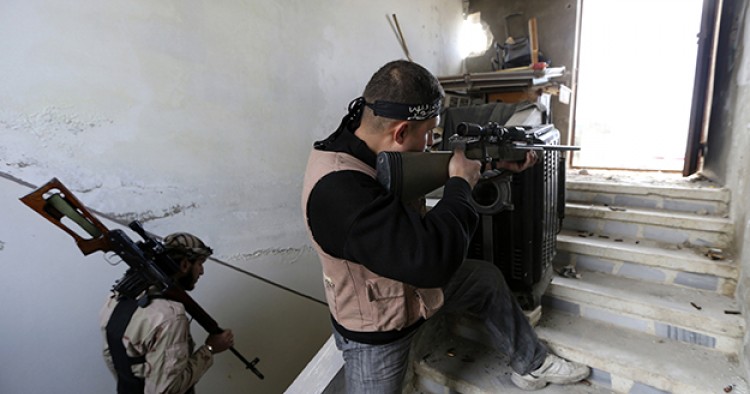 Tensions between the two main opposition umbrellas—Tahrir al-Sham and Ahrar al-Sham—in northwestern Syria continue to rise. The two sides are clashing in different towns, and intensifying their media campaign against each other to justify their narrative and rally more support from civilians.

Recent developments in Idlib are still evolving after the armed groups congregated under two umbrellas, with al-Qaeda’s local affiliate forming the core of Tahrir al-Sham and Free Syrian Army factions joining Ahrar in search of protection. Ahrar is going through a transformation after the defection of the radical Salafi-jihadist block of the movement in late January to Tahrir.

On the one side, Ahrar has become militarily weaker. The defected block consisted of more than 1,000 fighters, including many of the strongest and most professional fighters of Ahrar. They are known for their steadfastness and have played major roles in various battles throughout the conflict. Abu Jaber, a former general leader of Ahrar Al-Sham who led the defection, was a charismatic leader within the movement. His defection is symbolic and could attract many young followers and fighters.

Although other groups joined Ahrar when the jihadist block left, the new groups do not possess the same military capabilities. Furthermore, these factions are still not incorporated into the command structure of Ahrar, meaning their involvement is tenuous at best. To assimilate them, Ahrar needs to undertake a variety of structural and ideological reforms to be more inclusive and expel the remaining radical elements. It is not clear if Ahrar can go through such a process without witnessing larger, fatal defections. Ahrar would also need financial and military support. Ahrar is not an approved opposition faction by the United States, but some F.S.A. factions who joined Ahrar’s umbrella are vetted and received financial and military support. The support has been halted since January after jihadists attempted to seize F.S.A. weapons and resources. That has had a negative effect on the ability of those groups to continue the fight.

On the other side, current Ahrar leaders have found some relief. They no longer sense the threat of being designated a terrorist group next to al-Qaeda’s Jabhat Fateh al-Sham, as the jihadist figures and their followers defected from the group. They know for a fact they are weaker today than before the events of January, but the silver lining from their point of view is that they have become the last option for Turkey in the northwest, given their new alliance with F.S.A. factions. Currently, Ahrar claims to represent the moderate option in the northwest and is portraying itself as the sole group capable of confronting the al-Qaeda-led Tahrir al-Sham. Thus, it now has a higher chance to survive, find support in Turkey, and gain acceptance from other regional and international players. Although Ahrar is not participating in the Astana process, some groups who recently moved under its umbrella have joined and are represented in the talks. That strengthens Ahrar’s political legitimacy and makes it a de-facto participant.

On the ground, it’s difficult to draw lines between the two umbrellas. At times it is possible to see two or more faction flags in one small town. The situation is fluid, with the flags changing any day, especially for small groups. Tahrir is trying to focus on the military factories that produce weapons. They attacked two last week, one in Salqin and the second in Saraqeb—Ahrar regained control of the Saraqeb production facility soon after. The raid was led by Abu Saleh al-Tahhan, who was once a prominent leader in Ahrar. Although he regularly clashed with other Ahrar leaders, he was the military leader for more than two years. This serves as a reminder of another threat: leaders of Tahrir al-Sham were leaders of Ahrar, and so they know its strengths and weaknesses, and the distribution of workshops and military points. That makes any attack launched by Tahrir more effective and dangerous.

The biggest factor in any future scenario is Turkey. What does Turkey want and what scenario will it push for in the northwest? If Turkey moves seriously to confront Tahrir al-Sham, it’s expected that defections will take place inside Tahrir. A group like Nour al-Din al-Zenki would be the first to migrate from Tahrir to the other camp. However, that possibility remains remote, with the Turks focused on the conflict with the Kurdish Democratic Union Party, which dominates the U.S.-backed Syrian Democratic Forces. The situation in the northwest doesn’t seem to be a priority for outside players, but when they shift their focus, it could be too late to confront Tahrir al-Sham, which has become the strongest player in that region and could become the only one over the next several months.