What Pakistan’s Democratic Future Holds for the United States 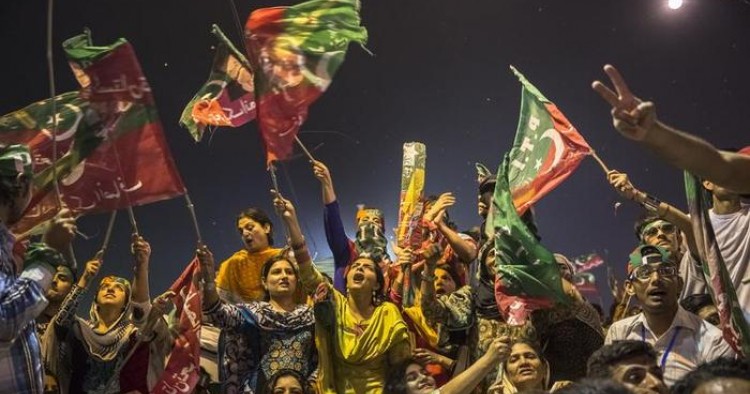 With elections set to take place on May 11, Pakistan stands at an important juncture of its history. The Election Commission of Pakistan, arguably the most independent and impartial that the country has had, is working diligently to ensure that the electoral process is free and fair. A democratically elected government could, for the first time in Pakistan’s history, relinquish power to another civilian government. Such a development, which marks a new phase in the Pakistan’s democratic struggle, indicates the need for a reassessment of U.S. policy toward the country.

Washington has traditionally found a willing partner in the General Headquarters of the Pakistan Army in Rawalpindi to aid its pursuit of strategic and tactical objectives in the region. Such an arrangement saw Pakistan’s generals making U.S.-friendly decisions on behalf of the state without being held accountable for their actions. Although the military still holds sway over important areas of national decision-making, during the past five years a visible shift has occurred in the country’s power dynamics. Civilians have asserted their authority through a massive exercise of consensus building in areas critical to national integration and to the creation of a functional democracy.

For example, the passing of the eighteenth constitutional amendment in 2010 by an outgoing parliament transferred power from the president to the prime minister and from the center to the provinces. The military has traditionally ruled Pakistan through a highly centralized system, and successive military dictators vested the office of the president with executive powers, contrary to the spirit of a parliamentary democracy. This centralization of powers has been a source of considerable tension between the center and the smaller provinces, which demanded more autonomy.

The eighteenth amendment gives provinces a substantial increase in funds and abolishes the concurrent list of 47 subjects on which both the parliament and provinces could legislate, including social welfare, health, education, culture and tourism, agriculture, and livestock. Although the amendment has not yet been fully implemented, the eventual transfer of a large majority of functions on the concurrent list to the provinces will substantially expand the provinces’ influence.

The subsequently passed nineteenth and twentieth constitutional amendments mandate bipartisan parliamentary mechanisms for the appointment of judges of superior courts, members of the election commission, and the caretaker setup. The participatory nature of these decisions has made these appointments less likely to be controversial. As we have seen recently, the Election Commission and the caretaker prime minister and chief ministers appointed through this process enjoy the support of all political parties.

Meanwhile, the judiciary has emerged as a major stakeholder and arbiter on important national issues, having aggressively taken on the executive and other institutions of the state for perceived failures in performing their functions. Even after the December 2012 retirement of Chief Justice Iftikhar Muhammad Chaudhry, the judiciary is expected to retain its flavor of independence from the powers that be. Justice Chaudhry became a symbol of resistance when he refused to resign as the Chief Justice of Pakistan at the behest of General Musharraf in 2007, who was then president. His defiance led to a countrywide movement for the supremacy of the constitution and the independence of the judiciary.

Another major change has been the emergence of a relatively free and fair media. News sources for the general public are no longer confined to the print media or to state-owned television and radio. Traditional and new media have proliferated over the past decade and have added powerful voices to the national discourse. With a vast public outreach, privately owned media houses are playing a crucial role in educating and building public opinion. Indeed, through their intense coverage, private television channels were instrumental in catalyzing the movement for the independence of the judiciary in 2007 and 2008. They have questioned public officials for many of their actions. Though some still criticize these outlets as being biased or bemoan their unsophisticated style, the media has, by and large, enhanced the narrative of democratic polity.

The loud voice of the media has had an impact on how Pakistan’s military conducts itself. Even though it continues to be the final arbiter on matters of foreign and security policies, it now finds it necessary to cede some space to civilians, at least as a means of putting a democratic gloss on its decisions. For instance, when the United States and Pakistan were at a deadlock over the November 2011 accidental killing of 24 Pakistani soldiers as a result of NATO fire, and the NATO supply route through Pakistan was subsequently closed, the military allowed the parliament to review U.S.-Pakistan relations and suggest a way out. This saw the parliament agree to reopen the route after Secretary of State Hillary Clinton apologized for the incident. If the democratic process is allowed to continue uninterrupted, such civilian space to maneuver will expand.

As democracy takes root in Pakistan, the United States finds itself having to deal with a larger cast of actors. The Kerry-Lugar-Berman Act, which is funding the U.S. civilian assistance program in Pakistan for the period from 2010 to 2014, clearly articulates Washington’s preference for the supremacy of a democratic government over the military. With civilian actors gaining more leverage in policy making, Washington will need to revise the way it engages with Pakistan to match this preference. Besides working with an elected central government, it must have a greater appreciation for the significance of Pakistan’s sub-national actors and exhibit a greater concern for Pakistani public opinion.

The 2014 U.S. withdrawal from Afghanistan and the resultant decrease in U.S. dependence on Pakistan’s military also means that the United States will need to focus more attention on the non-military aspect of its relations with Pakistan. An improved U.S. aid package to Pakistan can expand space for the implementation of soft power strategies. Therefore, the basis of any future engagement must increasingly be non-military.

The United States cannot influence Pakistan’s upcoming election, but the election’s outcome will have important implications for the super power. Even if the result is a split mandate, as is being predicted, the incoming government will have greater legitimacy. It will be expected to deliver on pressing issues, not the least of which will be reorienting its Afghan policy in anticipation of the U.S. withdrawal. On the domestic front, reviving the economy and handling the energy crisis demand priority. Equally important will be creating consensus on how to deal with extremism and militancy in Pakistan. These foreign policy and domestic questions are tied to Pakistan’s stability in the long run. While change must ultimately come from within Pakistan, the United States must realign itself with the country’s shifting power dynamics and expand its engagement with civilians in order to forge a meaningful and productive relationship.