What will the European Council's new president mean for EU-MENA relations? 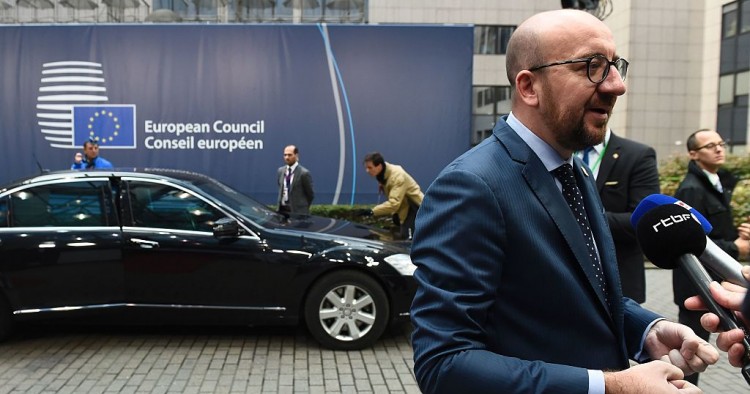 The May 2019 European Parliament elections saw personnel changes in key EU positions, and the new leadership will affect the EU’s external affairs, including its relations with the Middle East and North Africa (MENA). Among the EU’s key positions are the Presidency of the European Council, the Presidency of the European Commission, and the High Representative of the Union for Foreign Affairs and Security Policy. This article will examine the newly appointed president of the European Council, Charles Michel, and his potential impact on EU-MENA relations. While some changes may be in the offing, for now most signs suggest that regional leaders should expect neither new opportunities, nor new challenges, but more likely a broad continuity of existing EU policy toward the region.

The Presidency of the European Council is the highest administrative position in the EU. The president ensures, among other things, “the external representation of the Union on issues concerning its common foreign and security policy, without prejudice to the powers of the High Representative of the Union for Foreign Affairs and Security.” Soon after the May elections, the European Council appointed Michel, the prime minister of Belgium, to the position of president, and he will replace the incumbent, Donald Tusk, in December. The question is if his attitude toward the MENA region will differ from Tusk’s. To answer this, one can analyze Michel’s official statements and opinions on key issues, like the Israeli-Palestinian conflict, the Joint Comprehensive Plan of Action (JCPOA), the ongoing conflict in Syria, and migration.

On Israel-Palestine, Michel criticized the U.S. administration’s decision to move its embassy to Jerusalem. In addition, he cautioned that only a two-state solution “can bring lasting peace and security to Israel, Palestine, and their neighboring countries.” Michel also condemned Israeli actions against Gazan civilians in May 2018. In the official communique, the Belgian prime minister and Minister of Foreign Affairs Didier Reynders criticized the Israeli administration, saying: “Yesterday’s violence in the Gaza Strip is unacceptable. This is clearly a case of using excessive violence against civilians. Firing on demonstrators with the intent to kill is reprehensible. Israel must ensure the security of its citizens, but there are other means to achieve this than firing deadly bullets to stop the masses.” In the same document, however, Michel blamed Hamas for encouraging Palestinians “to cross the border into Israel and cause damage.” Such statements suggest that the newly appointed EU president is unlikely take sides in the conflict and may attempt to encourage dialogue. This would mark a continuation of current EU policy toward the Israeli-Palestinian conflict.

Michel’s position on the JCPOA, as the Iran nuclear deal is officially known, is the same as that of President Tusk. When President Donald Trump announced that the United States would reinstate all sanctions against Iran, the Belgian prime minister tweeted “No #IranDeal means more instability or war in the Middle East… I deeply regret the withdrawal by @realDonaldTrump from #JCPOA. EU & its international partners must remain committed and Iran must continue to fulfill its obligations.” Michel’s opinion is therefore clear: The Iranian authorities are to observe the JCPOA provisions and the EU is to conduct an independent policy toward Iran and should not yield under U.S. pressure.

On the ongoing conflict in Syria, Michel stated in his 2015 address to the United Nations General Assembly, “We shouldn’t choose between Assad and IS. We must have a Syria without Assad and without IS.” He advocates a political solution based on free and fair elections, but without Assad. In addition, Michel suggested that Europe should cooperate with Russia, the United States, and Iran in order to achieve such a political transition. He will therefore likely opt for a multilateral approach rather than unilateral European action in Syria. As for the jihadists detained there, the Belgian prime minister has been adamant that all of them, including Belgian citizens, should be tried in the region, not in their countries of origin. During a press conference following his meeting with House Speaker Nancy Pelosi in February 2019, Michel suggested the creation of an ad hoc international jurisdiction — a Syrian War Crimes Tribunal with a multinational group of judges, along the lines of the UN International Criminal Tribunal for Rwanda. As president of the European Council, he may try to negotiate a common position between Europe and the United States on how to deal with the jihadists.

Migration is another major issue for the EU related to the MENA region, as considerable migration flows remain a significant challenge to the bloc’s security. Michel’s position on this is also clear. During the European migrant crisis that began in 2015, he suggested that those member states which were reluctant to take in migrants should lose some EU rights. In addition, he almost lost his prime ministership in December 2018 when the New Flemish Alliance (N-VA) withdrew its support for him due to a row over migration. Michel submitted his resignation when N-VA openly criticized his decision to support the UN migration deal signed in Marrakesh. He has also stated that the European debate on this issue was exploited by some politicians “to spread lies and mistruth.” Now, as president of the European Council, he will have to deal with leaders of EU member states like Italy, Austria, Poland, Hungary, and the Czech Republic who openly challenge EU regulations on migration.

In conclusion, Michel’s previous statements and positions suggest that he is unlikely to significantly change the EU’s approach toward the major issues facing the MENA region. If he intended to change EU policies, however, he would have to convince other members of the European Council and gain the necessary support of the two main political factions in the European Parliament: the European People’s Party and the Party of European Socialists. For the moment, such a scenario is unlikely. In short, there’s likely to be little change in the Middle East and North Africa — at least from the European perspective.

Przemysław Osiewicz is an MEI scholar and associate professor at Adam Mickiewicz University in Poznan, Poland, specializing in EU policy towards the MENA region, Iran, and Turkey. The views expressed in this article are his own.

Georgia through a Middle East lens

An Israel-US defense treaty will ruin relations with Arab states