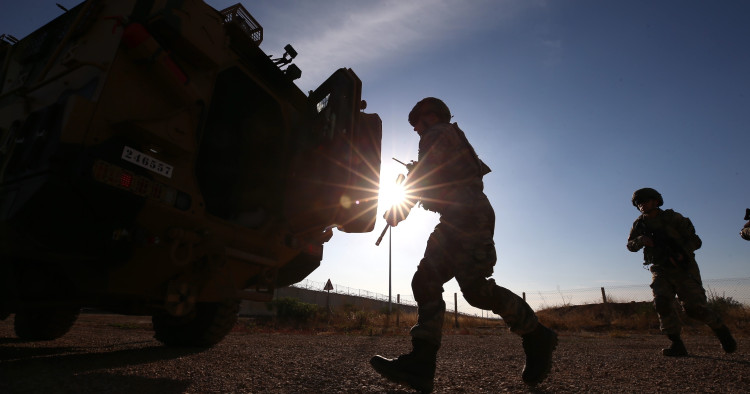 On Nov. 20, Turkish President Recep Tayyip Erdoğan launched a series of airstrikes targeting northern Syria and Iraq, and vowed another ground invasion of Syria would shortly follow. Turkey claims that the airstrikes were a response to a deadly explosion in Istanbul in early November, alleging that the Kurdistan Workers’ Party (PKK) and its allies, the Syrian Democratic Forces (SDF) — a Kurdish-led rebel group that was an instrumental partner to the United States in its fight against the Islamic State (ISIS) — are to blame.

Should the Turkish government make good on its threats to launch yet another military incursion into northern Syria, it would lead to a sharp escalation in violence in a country afflicted by a more-than-decade-long brutal conflict. Not only would Turkey’s military incursion have significant immediate effects on civilians and combatants in Syria, but it could also reverberate further throughout the region and world.

In 2011, the Syrian civil war began as part of the broader wave of non-violent protests of the Arab Spring against repressive rulers like Bashar al-Assad. The Assad regime turned to increasingly repressive tactics to quell protesters, triggering defections and giving rise to an armed insurgency. After the onset of violence, many rebel organizations formed against the Assad government, espousing a range of ideological commitments. One of the largest opposition movements was the Free Syrian Army, now the Syrian National Army (SNA), supported in both its historical and contemporary incarnations by the Turkish government.

A second organization, the People's Protection Units (YPG), mobilized to assert influence and later control over Kurdish regions in the north of Syria. The YPG has ties to the PKK in Turkey, a group that the U.S., the Turkish government, and several other countries consider a terrorist organization. These connections notwithstanding, the YPG became an effective fighting force against ISIS. In 2015, the YPG partnered with the U.S. to combat ISIS and became the SDF: a diverse coalition of fighters but a predominantly Kurdish-led organization.

Around the same time, the Assad regime partnered with Russia and Iranian proxies on the ground to combat opposition groups. The U.S.-SDF and the Assad-Russia-Iran alliances made significant territorial gains over the next several years as both of them defeated ISIS or (in the latter case) opposition rebel groups.

In October 2019, the Trump administration announced it would not stand in the way of a Turkish incursion, leaving a small contingent of troops behind to support anti-ISIS efforts in the region. Just days later, Turkey launched an invasion, Operation Peace Spring, into northern Syria. Referencing the SDF’s links to the PKK, the Turkish government claimed that the operation aimed to expel Kurdish forces from the Turkish border, as these posed a security threat to Turkey. The Turkish government also sought to create a 30-kilometer-wide “safe zone” to repatriate millions of Syrian refugees residing in Turkey. The U.S. brokered a ceasefire that allowed Turkish forces to remain in Syria, though not as deep into Syrian territory as the Turkish government had hoped.

Although the Syrian civil war is far from over, since that time, the major combatant parties’ territorial holdings have remained relatively stable. The Assad regime controls most of the country, but the SDF controls parts of northeast Syria that the group has taken to calling the Autonomous Administration of North and East Syria (AANES). A number of non-contiguous territories mostly in the northwest and collectively inhabited by around 5.5 million people remain in the hands of opposition groups like the SNA.

For months, the Turkish government has expressed interest in deepening its control over neighboring Syrian territory. The recent Istanbul explosion and retaliatory airstrikes may serve as at least one of the pretexts for another Turkish ground invasion.

What’s at stake in Syria?

The immediate impact of a Turkish invasion would be to escalate violence in Syria. SDF fighters, who include Kurdish militants, would surely be the target of such an operation. In northeast Syria, where the SDF has control, the Carter Center reports that violence had declined over the past several months — a downward trend that a fresh encroachment by the Turkish Armed Forces would reverse. Furthermore, almost 900 U.S. troops remain in the region and could come under direct threat from renewed hostilities.

The Turkish military might not be the only source of escalating violence. Its offensive could additionally embolden Syrian rebel forces supported by Ankara to intensify their own violent campaigns. Media accounts from Turkey’s 2019 incursion suggested that the armed groups it backed, like the SNA, participated in the military operation.

According to recent reports, the Russian military leader in Syria, Lt. Gen. Alexander Chaiko, has met with Kurdish forces in response to the Turkish government’s threats. News stations in the region covering the meeting claimed that Chaiko suggested deploying Syrian government troops closer to the Syria-Turkish border. Thus, an invasion by Turkey would further compound the probability of additional accidents and confrontations between Turkish and Syrian forces.

Finally, the SDF has been and continues to be an instrumental ally in the fight against ISIS. As recently as September 2022, the SDF worked with the U.S. government to conduct an anti-ISIS campaign. Due to the threat of a Turkish invasion, the SDF declared it was suspending anti-ISIS operations. Though in reality, this cooperation with the U.S. never really stopped and has since officially resumed. Still, weakening the SDF creates a window of opportunity for ISIS to gain strength once again — a point SDF officials themselves have made.

Of course, in all likelihood, civilians will most heavily bear the impact of escalating violence instigated by a Turkish ground invasion. For instance, the 2019 Operation Peace Spring raised allegations of potential war crimes by Turkish-supported opposition forces. Indeed, in October of that year, Jim Jeffrey, U.S. special envoy for Syria and the Global Coalition to Defeat ISIS under the Trump administration, told the House Foreign Affairs Committee, "We've seen several incidents which we consider war crimes.” Some have accused Turkish-aligned forces of using white phosphorous during this invasion. Others report that Turkish-aligned forces engaged in indiscriminate shelling, pillaging, and looting of homes and medical facilities. In response to the 2019 invasion, the SETA Foundation for Political, Economic and Social Research reported that the “YPG conducted 9 car bomb attacks, engaged in 10 cross-border attacks on Turkey, and planted several IEDs [improvised explosive devices], in total killing at least 113 civilians and wounding at least 178.” Since Nov. 20, the SDF retaliated, leaving civilians once again caught in the crossfire.

However, the violence civilians could face is only the first-order effect of a Turkish invasion. Beyond direct violence, Syrian civilians would experience fallout from increasingly devastated local infrastructure networks and a lack of humanitarian support. Millions of people in northern Syria currently depend on or require additional humanitarian assistance. The healthcare system is strained: since September, Syria has grappled with a cholera crisis, and less than 11% of the population is vaccinated against COVID-19. Yet when Turkey invaded in 2019, the United Nations Children’s Fund (UNICEF), International Red Cross (IRC), CARE International, and other aid organizations suspended services and evacuated foreign staff, further exacerbating the humanitarian crisis at the time. Few indications suggest another Turkish incursion would differ from its 2019 offensive.

What’s at stake in the region

Beyond Syria, aggressive Turkish posturing has implications for Turkey’s relations with Iran. Notably, Turkish actions against the Kurds in Iraq and Syria have increased the probability of heightened tensions between the two countries. In fact, in 2020, Turkish actions in Idlib narrowly avoided drawing in Iranian forces.

Not only did the November 2022 Turkish airstrikes target the Kurdish Regional Government in northern Iraq, but a Syrian invasion and occupation could increase refugees and displaced persons moving into Iraq. After Turkey’s initial invasion of Syria in 2019, an estimated 14,000 refugees moved into Iraq’s Dohuk Governate, causing camps for internally displaced persons to overfill. At the time, officials estimated that another Turkish invasion could cause 50,000 to 100,000 persons to flee to Iraq, potentially stretching an already overwhelmed refugee support system to the breaking point.

What’s at stake in the world

Beyond the region, Turkey has leveraged the fallout from the Russian re-invasion of Ukraine to consolidate its position against Kurdish groups it views as a threat. As a result of Russia’s war, Sweden and Finland both sought to join the North Atlantic Treaty Organization (NATO). Turkey has been slow to assent to Sweden and Finland’s applications for membership. Although both countries recognize the PKK as a terrorist organization, Turkey alleges that Sweden harbors PKK affiliates, and Ankara seeks their extradition. Sweden also lifted its ban on weapons sales to Turkey, after both Stockholm and Helsinki stopped arms sales when the Turkish military invaded Syria in 2019.

Nevertheless, Turkish demands on Sweden and Finland have continued to escalate, such as summoning the Swedish ambassador over what Turkey called an “insulting” TV show or calling for the Swedish defense minister to be fired. Ankara may use the threat of invasion or the realization thereof to extract even more concessions from Washington and its European allies.

Unfortunately, due to the Trump administration’s withdrawal of all but 900 troops supporting the Syrian Kurds, the U.S. has lost significant influence in the region, while Russia’s influence has increased. As a result, the U.S. has less leverage and fewer tools to resolve the situation peacefully.

Yet even given its current position, there are several actions the U.S. could take to try to mitigate further Turkish military actions in Syria. First, the U.S. and its allies should bolster the region’s humanitarian and civil society organizations with aid and resources. Not only has Syria been wracked by war and violence, but any Turkish incursion will exacerbate the humanitarian needs of people in the region.

Second and relatedly, another Turkish invasion would likely cause people to flee the violence for safety. Beyond civil society organizations, the U.S. should support the U.N. High Commissioner for Refugees (UNHCR) and other organizations that support displaced persons.

The Syrian civil war has moved into its second decade, and the violence and brutality that has transpired are hard to overstate. The U.N. estimates that over 300,000 civilians have been killed in 10 years. Another Turkish invasion against U.S. partners in the theater will do little but exacerbate an already devastating conflict and crisis.

Megan A. Stewart is an Associate Professor at the University of Michigan’s Ford School of Public Policy and a Non-Resident Scholar with MEI’s Defense and Security Program.