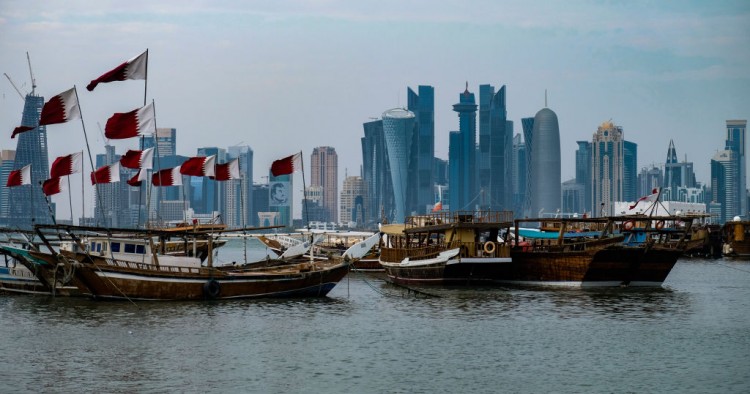 Fears of a large-scale war in the Middle East remain heightened as the U.S. continues ratcheting up sanctions against Iran while Tehran takes measures to scale back its restrictive commitments under the Joint Comprehensive Plan of Action (JCPOA). The latest sign of Iranian retaliation against the U.S. withdrawal from the 2015 nuclear accord was its decision, confirmed by the International Atomic Energy Agency (IAEA) on Nov. 11, to begin refining uranium at its Fordow underground enrichment facility. To what extent this cycle of escalation can persist without triggering a major conflagration between the Islamic Republic on the one hand and the U.S. and its allies on the other may be the most pressing strategic question facing the region today.

This dynamic creates challenges for U.S. allies across the Middle East, perhaps none more so than Qatar, which finds itself in a uniquely vulnerable position, in part due to its inescapable entanglement in Iranian-American tensions, but also compounded by its major foreign policy differences with Saudi Arabia and the United Arab Emirates (UAE). Thus, for Doha, it is essential to find a way to avoid being caught up in any potential U.S.-Iran conflict. From Qatar’s perspective, a Tehran-Doha non-aggression pact that would lay out, among other things, the key rules of engagement between the two sides’ armed forces could be a prudent step in that direction.

Iran might not have the means to protect its territory from destruction in the event of conflict, but it certainly has the ability to inflict a heavy toll on its U.S.-allied neighbors, including Qatar, which despite friendly relations with Tehran hosts the largest American military presence in the Middle East. Described by an American air force commander as a “tremendously strategic location, right in the center of everything,” al-Udeid Air Base, southwest of Doha, hosts over 10,000 U.S. forces. The Trump administration has recently been trying to expand and upgrade al-Udeid, “making it not only more central to the U.S. military posture, but also more permanent,” according to The Washington Post — an effort that Doha is enthusiastically supporting with logistical assistance and $1.8 billion in investment.

Qatar’s geopolitical situation, however, is complicated. Determined to weather the blockade imposed by the Saudi- and UAE-led bloc, it has had little choice but to strengthen its relations with Iran across a host of domains from aviation and food security to tourism and diplomacy. By the same token, the blockade has also prompted Doha to go to great pains to improve its relationship with the U.S. as much as possible.

Doha’s efforts to preserve relatively peaceful and conciliatory ties with Tehran, as well as its costly dispute with Saudi Arabia and other members of the Gulf Cooperation Council (GCC), seem to have created the impression that Qatar will go unscathed if war breaks out.

This is arguably an overly optimistic assessment of Tehran’s national security strategy and defense doctrine, however. On Nov. 16, 2019, U.S. Air Force Chief of Staff David Goldfein highlighted the potential threat from Tehran to make a case for the urgency of intra-Arab rapprochement while addressing a military conference held in Dubai. “When a missile or a UAV (drone) is en route from Iran, that is not the time to reconcile past grievances. That time is now. Today.”

On June 20, President Donald Trump retracted his earlier decision to launch a military attack against Iran in retaliation for the Islamic Revolutionary Guards Corps (IRGC) downing a high-tech American drone, which it claimed had violated Iranian airspace. Almost three months later, Gen. Amir Ali Hajizadeh, head of IRGC’s aerospace division, said in rare comments that had Washington resorted to military force, the IRGC would have targeted al-Udeid as part of its initial response to U.S. aggression. “Specifically, al-Udeid base [in Qatar] and al-Dhafra base [in the UAE] and an American carrier in the Sea of Oman had been aimed at, and we would have targeted them in the event of U.S. [military] reaction,” he elaborated.

Based on the IRGC’s defense doctrine, any actor that might aid and abet an adversary in carrying out military action against Iran in any way, including providing technical support, land territory, or air space, is a legitimate target. By this standard, it is unsurprising that top IRGC commanders attach special importance to Qatar in their contingency plans for retaliation.

There is precedent for this as well. During the “tanker war” phase of the Iran-Iraq War, from 1984 onwards, Tehran resorted to the use of force against oil tankers belonging to the GCC member states, such as Saudi Arabia, Kuwait, and Qatar, which were officially non-belligerent but assisted Iraq in one way or another as Saddam Hussein’s government embarked on a vigorous air campaign against Iranian oil installations and ships. In a similar vein today, if push comes to shove and Iran feels desperate in the face of U.S. military superiority and overwhelming force, it will likely target Washington’s regional allies to indirectly compel the U.S. to back down.

Considering such an eventuality, the Pentagon moved, albeit temporarily, its command and control center at al-Udeid out of the region in late September, replicating it at the Shaw Air Force Base in South Carolina. This was a tactical effort to minimize vulnerability and risks in the event of a conflict in the Gulf.

“The functions that the CAOC [Combined Air and Space Operations Center in al-Udeid] provides for air power are so critical and so essential that we can’t afford to have a single point of failure,” a senior U.S. commander said at the time.

These considerations underline the importance of concluding an Iranian-Qatari non-aggression pact, an idea which was broached by Foreign Minister Mohammad Javad Zarif during a visit to Iraq in May as a measure to reduce regional tensions. In its most basic form, such an accord would prohibit Doha from allowing its territory and resources to be used against Iran in a possible military confrontation with the U.S. and similarly prohibit Tehran from directing its retaliatory firepower at the small Persian Gulf state and its interests.

Ultimately, however, while a non-aggression agreement could help contain the catastrophic consequences of war and its spread to the region as a whole, a much more prudent policy would be to prevent military conflict from breaking out in the first place. Like the other smaller Gulf states, Qatar has a clear stake in preventing any crisis from erupting as it is squarely on the frontlines of the Trump administration’s “maximum pressure” campaign against the Islamic Republic.

While much recent analysis of the Gulf region has focused on the prospects that the Qatar blockade will be lifted and the nearly-30-month-old feud resolved, from Doha’s vantage point questions concerning the future of intra-GCC relations are less urgent than the emirate’s security dilemmas stemming from U.S.-Iran brinkmanship. There is no way around the fact that any country that shares a maritime border and an overall positive relationship with Iran while also serving as a close military ally of the U.S. has an extremely difficult balance to strike, especially amid the unpredictable Trump presidency.

Maysam Behravesh is a senior political analyst at Persis Media and a PhD candidate in the Department of Political Science at Lund University, Sweden. Giorgio Cafiero is the CEO and founder of Gulf State Analytics, a geopolitical risk consultancy based in Washington, DC. The views expressed in this article are their own.