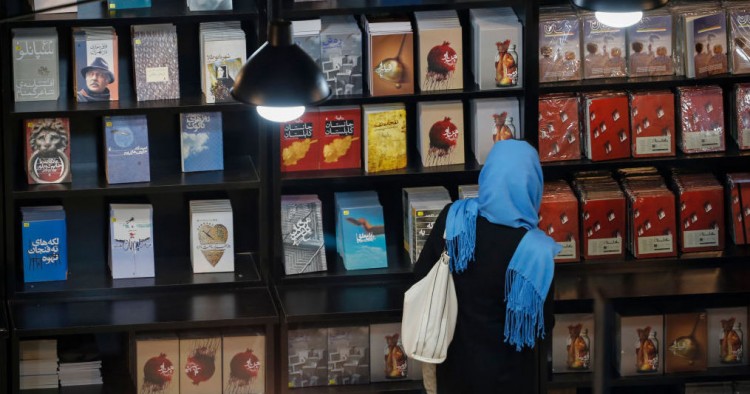 One day during the war with Iran, an Iraqi Army newspaper editor receives a handwritten manuscript from a low-ranking soldier on the frontline. He is astonished by what he finds: a literary masterpiece. When he learns that the soldier was killed on the battlefield, the editor publishes the story under his own name. He wins praises from every corner of the world for it. But then, he begins to receive a torrent of extraordinary stories from the same soldier who was supposedly killed in the war…

This is one of my favorite stories by the renowned Iraqi writer Hassan Blasim, from his collection of short stories, The Corpse Exhibition: And Other Stories of Iraq. Many Iranian readers would certainly identify with the story given the profound similarities with their own lived experience of the war. Blasim dedicated his story “TO THE DEAD OF THE IRAN-IRAQ WAR (1980-1988).” However, neither the book, nor this short story has ever been translated into Persian. Unfortunately, Blasim and many other distinguished Arab writers are unknown to the majority of Iranian readers and their works are not available in Persian. It is curious how a country that brags about caring for its neighbors (and simultaneously boasts about asserting its power) has so little interest in those same neighbors’ state of mind and modes of imagination. Arab literature has largely been neglected in the Iranian literary translation market.

What do the numbers tell us?

Let’s look at the data. According to my research using the bibliographic databases of Iran’s National Library, in the past 10 years (2010-20), more than 35,000 works of fiction have been published or republished in Iran. Only about 200 are translations of modern Arab children’s or adult literature. By comparison, 640 Turkish literary works were indexed during the same period. I also looked at all the books catalogued in Iran’s FIPA system, which registers all works ready for publication prior to receiving official permission. The FIPA system provides an indication of the economy of attention in the Iranian publishing market, which is largely private. It reveals the topics the Iranian community of translators and publishers are interested in before going through the official censorship process.

Still, many of the 200 translated Arab works of fiction are different translations of the same text. The most recent example is Jokha al-Harthi’s Sayyidat al-Qamar, for which the FIPA system shows eight different translations. All of these are from the second half of 2019, when al-Harthi won the International Booker Prize for her novel. The odds were not in favor of al-Harthi if she hadn’t won a high-profile Western literary prize. The majority of nominees and winners of the International Prize for Arabic Fiction, one of the most prestigious Arab literary awards, rarely catch the attention of Iran’s intellectual community. However, an Arab novel that gains recognition in the West is deemed worthy of being translated in Iran.

The most popular works are the usual suspects: Naguib Mahfouz, Jurji Zaydan, Gibran Khalil Gibran, and Ghassan Kanafani, as well as Nizar Qabbani and Ghada al-Samman when it comes to poetry. There are at least 15 different translations of Gibran’s Prophet, some of which have been republished more than 40 times in Iran. During the past decade there has also been a surge in interest in the classic One Thousand and One Nights with at least 60 different versions registered for publication in the FIPA system. And of course there are some unexpected surprises as well, such as the 2019 translation of Moammar Gadhafi’s “surreal gibberish” short stories, Escape to Hell, originally published in 1993. The fact that these works are translated and catalogued in Iran’s bibliographic system doesn’t mean that they are easily available in the market though. Shahr-e Ketab, Iran's leading bookstore chain, shows only 40 works of Arab fiction currently for sale.

For many years, Iran’s private book industry has faced a steady decline in readership. According to a recent study, the average print run for a book is around 800 copies. Since the chances of making a profit are very slim for translators and publishers, investing in Arab literature is a risk not many are willing to take.

Why is there so little interest in translating and introducing contemporary Arab literary works in Iran? If you ask Iranian publishers, the most common answer is that there are few reliable and capable Arabic to Persian translators. There are even fewer editors who can read the translations and compare them with the original text. It is easier to translate works of an Arab author who writes in English. The best example is Hisham Matar, the British-Libyan writer, whose three major works are all available in Persian. Oddly enough, publishers would prefer commissioning the translation of Arab fictional works not from the original language but from the English translation. And one can easily imagine how meanings could get lost in the process. Celestial Bodies was the title chosen for al-Harthi’s book in English. When translated from English to Persian the title became Astronomical Objects! However, the average Iranian reader could easily understand the meaning of the original Arabic title since the words are also used in Persian.

And yet teaching Arabic is a priority

It might come as a surprise then to learn that the Iranian regime is obsessed with teaching Arabic to its children and citizens. Article 16 of the Constitution of the Islamic Republic of Iran mandates that Arabic must be taught to students of all grades and disciplines who finish elementary school. Even though anyone with a high school diploma in Iran has taken Arabic courses for at least six years in their life, very few of them would be able to carry on a basic conversation in Arabic or even understand a simple text written for children. It is an open secret that students dislike learning Arabic and that the education system has miserably failed them by wasting their time. Furthermore, the method of teaching is antiquated, is obsessed with an old seminary pedagogy of grammar instruction — Sarf and Nahw — and is highly ideological: it teaches a form of Arabic solely intended for reading religious texts.

This ideological approach has also had a negative impact on higher education. More than 100 universities and higher education institutes in Iran offer bachelor’s degrees in Arabic literature and in Arabic translation. Together, they have the capacity for more than 5,000 students per year. Since Iran has a very competitive university entrance exam, many applicants cannot study in their desired field and must instead pursue what their score allows them to. In the case of Arabic, however, one can effortlessly gain admission to a school offering Arabic degrees. Despite this fact, applicants are few and many seats are left empty. By comparison, every year many students apply to study languages such as English, German, French, and in recent years Spanish, but due to the high number of applicants, many are rejected. Finally, one needs a strong passion for pursuing an Arabic degree in university because the prospects of finding a job and earning an adequate salary are not promising.

The performance of peer-reviewed journals is relatively better. During the last decade, five academic journals on Arab literature — three housed in major universities in the capital, Tehran, and two in the cities of Yazd and Mashhad — began publication. The topics of articles in these journals range from classic studies of Arabic syntax to modern feminist critiques of contemporary authors.

Only if it fits with the political narrative

The Iranian government insists on teaching its citizens Arabic, but it has seldom cared about introducing contemporary Arab literature to them. And when it does, it is for the sake of promoting what fits with its political narrative. Beginning in the 1980s, Hozeh Honari, the art department of Iran’s Islamic Development Organization —a large entity under the supervision of the supreme leader tasked with propagating and promoting religious culture — occasionally translated what it called “the literature of resistance” from the Arab world, especially works on Palestine. In 2002, Hozeh Honari established a special bureau for Persian-Arabic literary exchange. The bureau has occasionally supported the translation of a seemingly random assortment of Arabic contemporary works, including a recent anthology of Omani poets and writers, but its main focus is on translating works of Iranian authors who fit the regime’s ideological standards. For example, One Woman's War: Da, a famous war memoir by an Iranian female that tells the story of Khorramshahr’s occupation by Iraqi forces and its eventual liberation, has been chosen for translation into Arabic.

The Iranian regime’s obsession with instilling in its citizens a knowledge of religious Arabic has certainly forced many disgruntled generations to live with the constant use of clerical Arabic terminology in schools, on the streets, and in the media. Associating Arabic with the political system has dissuaded many Iranians from developing an independent interest in learning about Arab societies and their cultural production.

It’s important to note that there are also more deeply rooted cultural assumptions and stereotypes that hold Iranian intellectuals back from approaching Arab literature. Like their Arab peers, their compass is geared toward the West. As one Arabic literature translator put it: “The third- and fourth-rate works of American and European authors easily get translated while the most prominent Arab writers remain unknown. … People usually say there is nothing worthy in Arab literature! Shouldn’t they first read and then judge?” Iranian translators of Arab literary works do not shy away from pointing out and criticizing their society’s attitude. “Our intellectuals should set aside their ethnic prejudice and their historical animosity and update their knowledge about their [Arab] neighbors,” another translator stated.

Iranians know little about how the Iraqis experienced the eight-year war of the 1980s. Such an understanding is not possible through official narratives and sanctioned memories of the war, which, by the way, are strikingly similar in both countries. Rather, it can be gained from reading genuine and creative works by authors like Hassan Blasim and Ismail Fahd Ismail. One usually takes refuge in fiction to escape the horrors of real life. But for Iran and its Arab neighbors, fiction could serve as a bridge and help to bring about positive political solutions to their conflicts. Literature opens a window into people’s hearts and minds, their aspirations, anxieties, and vision for the present and the future. And this window has yet to be opened widely.