Why is Turkey Silent on Russia’s Cooperation with the Syrian Kurds? 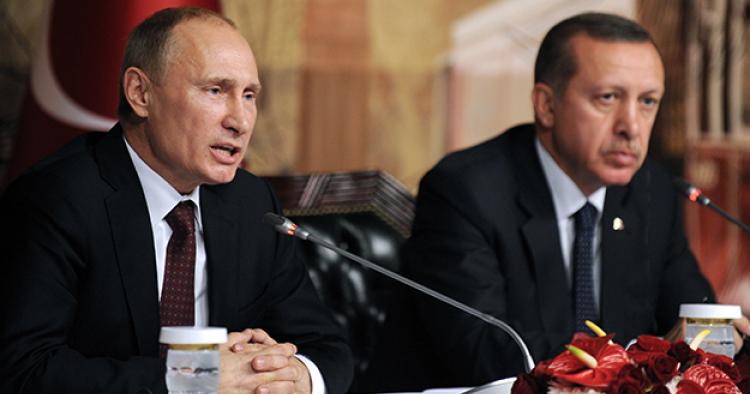 Read the full article on War on the Rocks.

Turkey’s President Recep Tayyip Erdogan never misses an opportunity to swipe at the United States for its cooperation with the Syrian Kurdish militia, the YPG (People’s Protection Units), a key U.S. ally in the fight against ISIL. On an almost daily basis, he slams Washington for “giving weapons to a terror organization” and declares U.S. policy to be a violation of the NATO treaty. When Brett McGurk, the U.S. official responsible for coordinating the international coalition against ISIL, visited YPG members in the Syrian town of Kobane and posed for the cameras with Kurdish commanders, Erdogan asked the United States to “choose between us or the terrorists.” The Turkish foreign minister said he should be sent home while pro-government columnists called for his detention.

But when it comes to Russian support for the YPG, Ankara is mute. Neither Erdogan nor other top ruling party officials uttered a word when the Russian commander at the Hmeimim military base and the YPG spokesman appeared before cameras and made a joint press statement. The Russian commander said they were conducting a joint operation against ISIL in the eastern city of Deir ez-Zor. Russian warplanes provided air cover for the YPG while the Kurdish forces protected Russian forces on the eastern side of the Euphrates.

Turkey’s muted response to Russia’s collaboration with the YPG points to an inconvenient truth for the ruling AKP: Ankara has historically been vulnerable to Russia’s Kurdish policy. In the past, it had leverage to keep Moscow in check. But today, Ankara’s hands are tied. Turkey has no leverage to steer Russia away from cooperating with its archenemy. Ankara might hope Moscow will drop the Kurds as the campaign against ISIL begins to draw to a close. But Russo-Kurdish partnership has deep roots that stretch back to the turn of the last century and might last longer than Turkey would like. As American power in the region is perceptibly in retreat, Russia is trying to fill the vacuum. In Moscow’s regional calculations, the Kurds might prove to be more than great fighters. They could provide the Kremlin with further leverage.