Why Yemen Isn't an American Priority 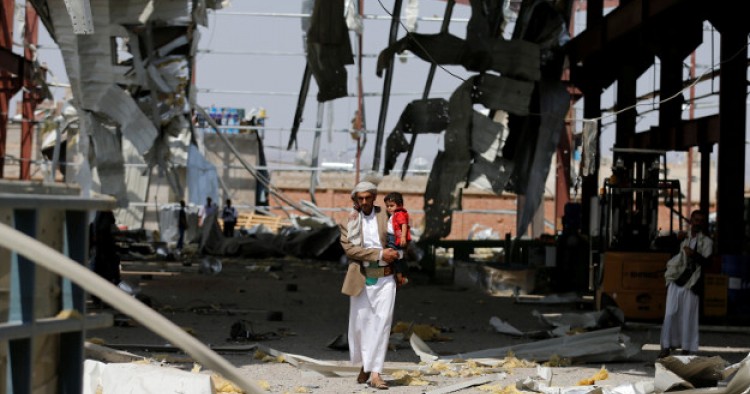 This article was first published on RealClear World

Yemen is not in the American public’s eye. The country only really attracts the attention of the military professionals combating al-Qaeda, or U.S. diplomats charged with promoting stability in support of the fight against the terrorist organization. Yemen sits low even on the U.S. State Department’s agenda, overshadowed by its much more important neighbor, Saudi Arabia. The United States may disagree with Riyadh over Yemen, but the heavy gravity of Saudi Arabia in U.S. policy causes a mix of contradictory stances that add up to the kind of failure evident in the recent visit to the region by Secretary of State John Kerry.

Kerry’s suggestions to restart political negotiations after a month of intense fighting became quickly mired in the very Saudi and Yemeni politics that Washington appears unable or unwilling to navigate. The Saudis have staked out a red line in the sand in Yemen -- repeated recently by Saudi Foreign Minister Adel al-Jubeir -- that Riyadh will not allow the Houthi movement, who the Saudis see as an Iranian proxy, to take over Yemen. However, the aggressive Saudi military stance in Yemen has only deepened the country’s political troubles, in fact strengthening the hand of former president Ali Abdullah Saleh, with whom the Houthis formed an alliance back in 2014. Moreover, while the United States at times appears to differ from its close Saudi ally on Yemen, Washington has in reality supported the Saudi campaign with large-scale weapons sales and coordination of military operations.

Kerry, as far as can be discerned from press statements, called for the formation of a national unity government and the creation of a neutral security body, a third party, to oversee disengagement of forces. Given the military stalemate in Yemen, Kerry’s proposals do not appear unreasonable, but Yemeni President Abed Rabbo Mansour Hadi and his Saudi backers see them as a dangerous capitulation to the Houthi and Saleh coup in Sanaa. Rather than a neutral security body, the Saudis want the Hadi government restored to power in Sanaa and the military rebuilt under Hadi’s command, in effect a complete surrender of the Houthi-Saleh forces that the latter are not likely to agree to. The Saudi stance appears untenable given the military stalemate, but the United States and the international community gave strong support to the Saudi position in UN Security Resolution 2216 in 2015, and the Hadi faction carefully guards against even the slightest apparent deviation from the language of that resolution.

The ongoing Saudi air campaign has also caught the attention of a small portion of the American public. Revelations that cluster bombs hit civilian targets, and that medical facilities, particularly Doctors Without Borders clinics in the north, have been targeted by Saudi planes caused members of Congress to call for restricting arms sales to Saudi Arabia. While the White House did stop the sale of cluster bombs to Saudi Arabia, Saudi requests for large arms deals are always approved.

American priorities in Yemen do differ from those of the Saudis. For Riyadh, as al-Jubeir reiterates, Iran is the principal threat to the region, and the Houthis are Iran’s agents. Washington, on the other hand, sees political instability and terrorist groups as the primary threats, not Iran. In the days after Kerry’s visit to Saudi Arabia, the Islamic State group attacked military recruits in Aden, killing more than 50 youths. The State Department used the opportunity of its condemnation of the attack to focus on the need for a political settlement in Yemen and the restoration of a unified central state.

In early September, Kerry doubled down on his proposals for negotiations by calling for a 72-hour truce in the fighting. Neither side paid attention, but Kerry’s insistence signals growing U.S. concern with Yemen. The United States can play a constructive role as a negotiator, but only to the extent that the warring parties are resigned to a negotiated solution. The Saudis still pretend to chart a course independent of the United States in the region, but the impossibility of a military solution will force Riyadh to return to negotiations. The larger problem is the stark differences between the warring sides. The Hadi faction appears unwilling to truly share power (or even really negotiate), insisting on a complete surrender. The Hadi faction also enjoys support from a lot of Yemenis. That Saleh may regain power repels many Yemenis who aspire to build a civil state without tribal warlords and who made great sacrifices to overturn Saleh’s rule. On the other side, the Houthi-Saleh leaders have yet to show that they will play by the rules of a peaceful political solution and at least withdraw their weapons, if not surrender them. While the Saudi side has shown a willingness to negotiate with the Houthis, and vice versa, in spite of al-Jubeir’s rhetoric, the parties show little willingness to budge even the slightest from their positions.

Given the hardened stances in Yemen, only patient, long-term mediation will succeed, and the United States can play a constructive role in pressuring all sides -- including the Saudis -- and providing a forum for negotiations. For Washington, Yemen is primarily a terror threat, and it will remain so under any future administration. The Obama administration is at its most hawkish in its use of drones against al-Qaeda in Yemen. Future administrations will likely continue the practice. The Obama administration insists that the drones must be accompanied by efforts to build the capacities of local partners, in this case helping to mend the deep split in the Yemeni state, but a more isolationist administration might forego intervening in foreign wars.

The U.S.-Saudi relationship is likely to stabilize in spite of recent rhetoric in Congress against the Saudis. Regardless of recent differences, American and Saudi geopolitical interests will continue to overlap, and any future U.S. administration will no doubt remain attentive to Saudi interests in the region.