Will China Interfere in the Israeli-Palestinian Conflict? 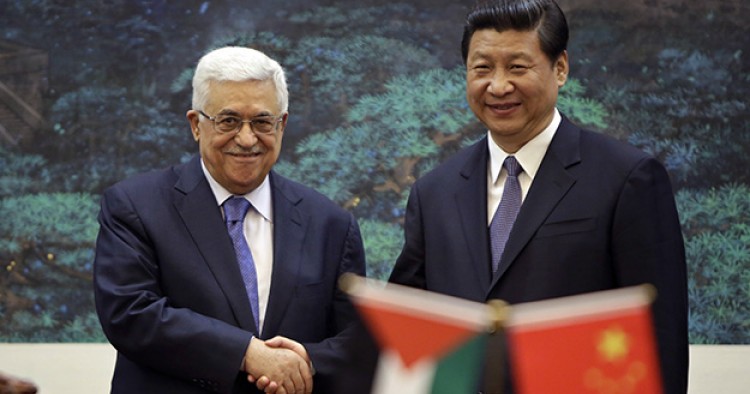 In June 1954, the leaders of China, India, and Burma (now Myanmar) issued a joint statement affirming the Five Principles of Peaceful Coexistence―mutual respect for sovereignty and territorial integrity, mutual non-aggression, non-interference in each other's internal affairs, equality and mutual benefit, and peaceful coexistence―as the basis for conducting international relations.[1] Since then, China has adhered strictly to the principle of non-interference in other countries’ domestic turmoil, as displayed prominently over the past several years in Beijing’s response to the Syrian civil war.

However, this is not true in the shuttle diplomacy China is practicing with respect to the conflicts in Sudan and South Sudan. There, Chinese state-owned enterprises (mainly the China National Petroleum Company) have invested heavily in the oil fields of Sudan for decades, and in the oil infrastructure of South Sudan since its independence in 2011. China’s “crossing the water by feeling the stones”[2] style of changing its non-interference policy is happening not just in Sudan but also in many other parts of Africa and, on a smaller scale, in other parts of the world.

China’s rationale could not be simpler: protect investments. Indeed, in all of the places where China has decided to “interfere,” significant Chinese economic interests are exposed to potential harm if local conflicts or political turmoil are allowed to fester. In 2009, China surpassed the United States as Africa’s largest trading partner, and China has become the third-largest source of foreign direct investment (FDI) worldwide. Chinese political activism has clearly increased—if thus far only selectively and incrementally—alongside its booming international trade.

According to this logic, therefore, China is destined to interfere in the conflict between Israel and Palestine. After all, China has acquired, either in full or in part, multiple Israeli companies of significant size. Both Chinese and Israeli companies are benefiting from partnering with each other in the high-tech startup field, with venture capital and private equity deals encompassing Beijing’s Zhongguancun—popularly referred to as “China’s Silicon Valley”—and Israel’s Silicon Wadi.

Although Chinese economic involvement with the Palestinians is not as extensive, Beijing understands well the importance of its role as an “old friend” of the Palestine Liberation Organization. Lackluster support for the Palestinian cause would not only bring complaints from Arab states but also damage China’s hard-earned international image as an advocate of justice in the developing world. Every November, Beijing continues to hold a reception commemorating the “International Day of Solidarity with the Palestinian People.” President Xi Jinping sent a congratulatory letter to the commemoration in 2014, a rare show of China's increased attention to the Palestinian cause, a sign no Arab country would miss. Besides, China considers having a supportive stance on the Palestinian issue a means of easing tensions with its own Muslim minorities, a crucial element in Beijing’s New Silk Road Economic Belt vision.

The Middle East serves not only as China’s indispensable source of fossil fuels but also as a vast market for Chinese-produced commodities and products. Though China has tried to diversify its energy sources and thereby reduce its dependence on Middle East producers, these efforts have proven only modestly successful. Russia is neither a reliable nor an economical alternative, judging from, among other things, the cost of transporting Russian oil to China by pipeline. Beijing has also learned the high cost of seeking to maintain stability in African countries. Therefore, compared to the alternatives, working cooperatively with the existing guarantor of order in the Middle East—the United States—is not a bad option. Being called a “free rider” for doing so is merely a nuisance. And in any case, a would-be driver needs first to be a rider in order to learn how to drive―a fact the United States would do well to acknowledge if it wants China to learn how to contribute to stability in troubled regions of the world.

Also motivating China to become more involved in solving the Israeli-Palestinian conflict is the desire to achieve balance in its relations with the United States. With growing tensions between China and the United States regarding the handling of territorial disputes in East Asia, China sometimes seeks to test vulnerabilities in the United States’ own “backyard,” whether in the Middle East or South America. No issue in the Middle East has consumed more resources and caused more chronic pain for the United States than the Israeli-Palestinian conflict. Each successive U.S. administration has started a new round of initiatives aimed at improving relations between the two parties, but all attempts have ended with a larger Israel and a smaller, more fragmented Palestine.

Though China is now tempted to involve itself in resolution of the conflict, and the risks and rewards of potential steps are being discussed internally, the temptation is not being acted upon. Beijing still defers to U.S. leadership—and ownership—of the matter. For the most part, this is because China does not yet have a clear, coherent Middle East policy or a group of experts and policymakers with a well-honed strategy for approaching the Israeli-Palestinian conflict, let alone resolving it.

China understands that it needs to find a way out of the vicious cycle that has repeatedly doomed U.S. efforts to mediate the conflict. Fortunately, many of the factors that complicate U.S. efforts are almost nonexistent in China. China does not have a large Jewish population, and its political system is almost completely immune to lobbying pressure and to the complexities of inter- and intra-party politics. Moreover, China not only has a cozy relationship with Israel, but also with all of Israel’s adversaries, such as Iran, Syria, and Turkey.

As for the Arab countries, their stance might be more complicated than it seems on the surface. Although there is a "comprehensive" Arab Peace Initiative that China supports, the plan is already outdated due to the many new Israeli settlements and the many lives taken in the armed conflicts that have occurred since it was first proposed in 2002 (and later re-endorsed in 2007). Besides, the political balance in the Middle East has changed dramatically in the past five years. Both the Israelis and the Palestinians have altered their calculus, and it is harder than ever to get them to sit down at the negotiating table. Growing internal tensions among different Arab countries and Muslim sects, as well as the party politics within Israel, contribute to the conflict’s ever-increasing complexity.

Nevertheless, as a country that itself has a long and complicated history in handling sophisticated multi-party conflicts (the Spring and Autumn and Warring States periods, for example), China is better equipped than the United States to come up with a comprehensive and culturally sensitive solution to the long conflict. By working bilaterally with all countries in the Middle East, China will be able to exert greater pressure on them. Each country will be willing to give up more for long-term peace in the region because each realizes that it needs China more than China needs it. This is a position that the United States envies.

Whether China is fully ready or not, the question now is when—not if—China will “interfere” in the Israeli-Palestinian conflict. Perhaps, as with many Chinese initiatives during the past several decades, it is better to learn a new policy while in the process of implementing it. For the time being, it is likely that China will stick to making strong diplomatic statements regarding resolution of the conflict while preparing for the day when Washington invites Beijing to participate fully in the peace process.

[2] This is a Chinese expression referring to a methodical, pragmatic style in addressing a new problem.

Note: The original Chinese version of this essay appears below. Special thanks are due to Mr. Gangzheng She, a Ph. D. candidate in the Department of Near Eastern and Judaic Studies (NEJS) at Brandeis University and a fellow of the Schusterman Center for Israel Studies, for producing the English translation.