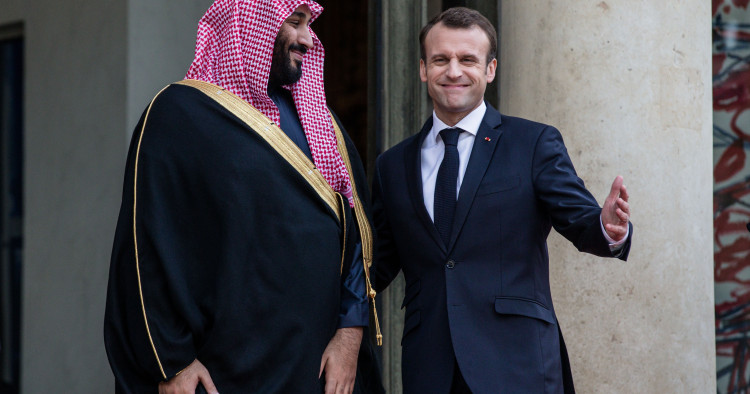 When Emmanuel Macron was elected president five years ago, many analysts wondered how it might affect France's policy toward the Middle East and North Africa (MENA). At the time, France found itself at a crossroads, having to contend with the shift in U.S. policy toward the region during the presidency of Donald Trump, growing dissension within the Gulf Cooperation Council (GCC), increasingly deteriorating relations with Iran, tensions with Turkey after the failed 2016 coup, and ongoing bloodshed in Syria, Libya, and Yemen, all while conducting a military campaign against ISIS. Following Macron’s recent reelection to a second term, the key question now is whether he will maintain or change his current policy toward the region.

During his first term, French strategy toward MENA focused on several important elements and provoked differing opinions. Some authors have suggested that the French president wants to turn his country into a Middle Eastern superpower. Still others spoke of a “Macron Doctrine” toward the region. Even if both viewpoints exaggerate the truth, one thing is clear: France adopted a vigorously proactive policy toward the MENA countries, and the Quai d’Orsay reserved a seat for itself at the table whenever a crisis broke out. President Macron himself has logged many miles traveling across the region, visiting, for example, Lebanon, the Arab Gulf states, Iraq, Israel, and the West Bank.

The Macron administration denounced the United States' withdrawal from the Joint Comprehensive Plan of Action (JCPOA) in 2018. It was France and Germany that worked hardest to find a workaround after America reimposed sanctions, so as not to lose multibillion-euro contracts in Iran. Thus was born Instex, a Paris-based company governed by French law that serves as a special purpose vehicle — a legal entity created with a specific objective. In the case of Instex, its main goal is “to facilitate legitimate trade with Iran in light of challenges faced by European market participants who wish to continue trading in and with Iran in an unobstructed manner.” Although this initiative had little tangible effect, its very creation testified to the attitude of the French authorities concerning Iran and U.S. policy toward it. Current negotiations suggest that France remains one of the countries most committed to lifting the sanctions against Iran — a prospect that now seems more likely following the recent “unblocking” of stalled nuclear talks by EU diplomatic officials.

From the very beginning of the Syrian civil war, Macron has condemned President Bashar al-Assad. This explains his bristling at Trump’s decision to announce the withdrawal of U.S. troops from the country. Yet in 2019 he also reproached Turkey for its engagement in the Syrian conflict. Among European countries, France has gone the furthest to support the Syrian opposition since 2011, ultimately to little avail, as Assad held onto power. This disheartening outcome will not, however, dampen Macron’s efforts to weaken the Syrian leader and strengthen France's position in the Levant.

In the case of the Yemeni civil war, President Macron has sided with Saudi Arabia in its fight against the Houthis. France, to great controversy, continues to arm the Saudis and Emiratis. At the same time, Macron has repeatedly — and one could argue hypocritically — expressed concern over the humanitarian crisis in Yemen. During his second term in office, Macron will certainly continue to build France's regional strategy upon close cooperation with the UAE and Saudi Arabia. Nonetheless, the eventual lifting of sanctions on Iran and concomitant renewal of Franco-Iranian economic contacts could create friction, as was the case after 2015.

On Israel-Palestine, Macron was only slightly critical of Israel’s repression of the Palestinians in May 2021. Although France continues to support a two-state solution, the current occupant of the Élysée is not particularly well-perceived by the Palestinians, who resent his support for Israel during the Gaza conflict in 2021 and his subsequent ban on pro-Palestinian demonstrations in France. This notwithstanding, the French leader has offered to mediate peace talks. France could fulfill such a role, but only if it tempers its pro-Israel stance. His statements in February 2022, when he criticized the findings of a report by Amnesty International assessing the treatment of Palestinians by the Israeli authorities, were the best proof of his current attitude. The French president, by focusing primarily on the report’s use of the word “apartheid,” made the Israelis out to be the victims, while glossing over the plight of the Palestinian people.

In its activities in the MENA region, France must also take into account the interests of other influential outside players, such as the United States, Russia, and China. The presidency of Joe Biden has helped to facilitate greater policy coordination between Washington and both Paris and Brussels. Macron has earned a reputation for supporting the deepening of European integration and, as has been the case so far, will strive to harmonize EU voices on international issues, including those related to the Middle East. In the case of Russia and China, the French will continue putting up barriers to both countries in the region. Such actions will have a major impact, especially to the detriment of Russia, as France attempts to limit the Kremlin’s room for maneuver outside Europe in response to its ongoing war against Ukraine.

All in all, President Macron and his administration seem poised to continue their current policy toward the MENA region, and only unforeseen developments are likely to change the goals set and measures taken. At the same time, France will invest its time and energy into strengthening the EU’s “neighborhood policy” toward the MENA countries. The Union for the Mediterranean, in which France has flexed its leadership muscles, will remain the main forum for cooperation.

Przemysław Osiewicz is a non-resident scholar at MEI and an associate professor at Adam Mickiewicz University, Poznan, Poland, specializing in EU policy towards the MENA region, Iran, and Turkey. The views expressed in this article are his own.