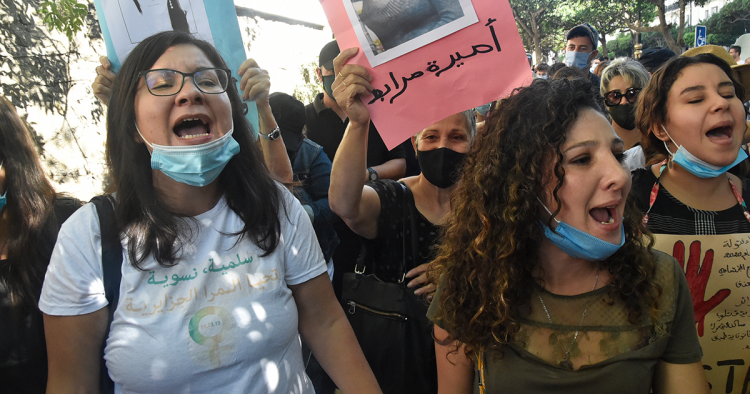 The Arab region’s diverse collection of 22 countries has one thing in common: Women continue to experience a backlash against their own long-overdue rights and fundamental freedoms. A combination of patriarchal structures, prolonged insecurities, and protracted crises means that this region ranks the lowest in the world in terms of women’s rights, with a gender gap that needs 153 years to close. No Arab country is even among the top 100 on this list.

Even without the COVID-19 pandemic, instability and insecurity are the norm across the region — from humanitarian crises in Syria, Palestine, Yemen, and Iraq to economic collapse in Lebanon. These shocks continue to be felt throughout the region, destroying already-scant systems of social protection and women’s services and support. In times of insecurity, pre-existing vulnerabilities are magnified, and women’s rights are the first to be stripped and the hardest to revive.

"In times of insecurity, pre-existing vulnerabilities are magnified, and women’s rights are the first to be stripped and the hardest to revive."

Most Arab countries have signed and ratified universal conventions supporting human rights (with reservations), but these have not brought meaningful change for women. Inequality remains the greatest impediment to regional progress. Progress or regress in any of these areas has an impact on all aspects of women’s lives. Insecurities don’t stay neatly confined within their borders. Instead, they intersect rather messily. Unless we address inequalities everywhere, we will achieve equality nowhere.

Meaning: There is a lot of work to do.

What will the region’s family and gender norms look like in five years?

Things are changing in some countries, but progress and regress go hand in hand.

Women in Arab countries are an underutilized economic force, with the lowest female employment rate in the world. When employed, women are more often relegated to traditionally feminized work, in addition to their disproportionate share of unpaid care.

In the near future, more women will enter the workforce — by choice or by necessity. However, men’s perceptions of working women will not evolve as quickly, despite women’s increased economic independence. Women may still be relegated to overly feminized sectors, and equal pay is a long way off. Family tensions are likely to increase as a result of new-found freedoms, and women’s rights activists predict a greater backlash, and a rise in divorce rates.

The region must focus on increasing women’s employment in the formal labor market while also recognizing and reducing women’s unpaid care burden. The region must invest in women’s health, particularly in ensuring that women have access to the full range of sexual and reproductive health services, with full autonomy over their own bodies.

Arab women are significantly behind in terms of women’s participation and representation in politics. Even when women are present in politics, they are still kept from exerting power to influence change. This lack of political participation is largely due to cultural barriers, limited access to economic and financial resources, and the absence of female role models in political and public life.

Certain conditions need to be met before women are able to participate equally in all aspects of personal, public, and political life. Without massive legislative reform, nothing will be achieved. But policies on paper do not necessarily translate into practice. There continue to be discriminatory laws that hold women back — personal status codes that dictates what women can and cannot do with their bodies and their lives. Women must be present and active at all levels of leadership and decision-making. We need women in parliament — feminist women who will act in favor of women’s interests.

Sexual violence and harmful practices, like honor killing, female genital mutilation, and child marriage, also continue to be prevalent and show no signs of abating. As the region continues to face insecurities, these forms of violence will only increase. Rights, freedoms, and opportunities cannot be named and claimed as long as women are unsafe in public and private space.

The education system must be updated and aligned with internationally-recognized good practice. Education for girls at all levels need to be guaranteed and normalized. Concepts of rights, respect, equality, dignity, and consent must be taught in schools. Girl child marriage must be banned, along with all other harmful practices to which girls are subjected. Understandings of bodily integrity and autonomy are fundamental if violence against women is going to end. Because without women’s safety in public and private space, all the other rights are rendered meaningless.

And yet, there is a new generation of feminist women who are leading the charge for change. In many Arab countries, strong pushes for gender equality will be met with conservative backlashes, with imprisonment of activists likely to continue. At the same time, young activists wield the power of social media and refuse to stay silent. The world is watching.

There is a rift between this new generation and the previous one in terms of redefining roles, relationships, rights — and the meaning of family. It is impossible to generalize across the Arab region, given the great diversities between and within countries, but change will continue to happen, albeit slowly. Somalia cannot be compared with Syria, Libya cannot be compared with Lebanon.

One thing is clear: We will not see a radically different Arab region in five years. Will there be sexual and reproductive health and rights for all? Will there be freedom to love whomever we choose? Will there finally be full and meaningful equality for women? I would like to be optimistic, and yet the challenges are great.

To ensure meaningful progress in the Arab region, we must all focus on fully funding frontline women’s groups and providing them with the tools and resources they need to do the work they have always been doing. The region must move toward feminist leadership at all levels as it is time to challenge and change existing power structures if we want the region to succeed. There’s evidence for this: When women lead, we all benefit. It is the only hope the Arab region has.

Lina AbiRafeh is the executive director of the Arab Institute for Women (AiW) at the Lebanese American University, based in New York and Lebanon.