Women & the Fight for Bodily Integrity in Egypt 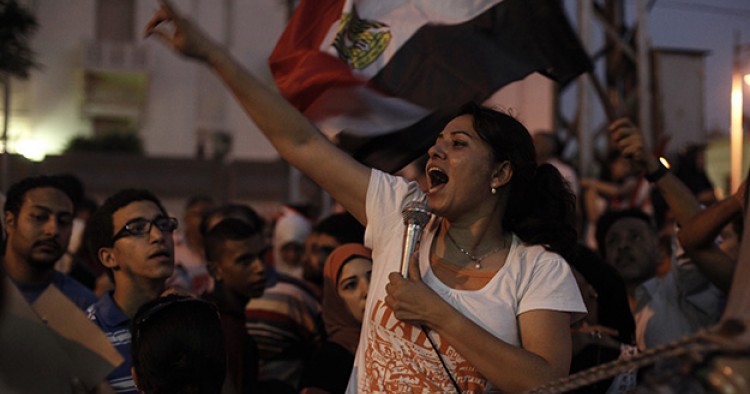 The struggle for bodily integrity—a right broadly defined as the inviolability of the human body and the self-determination of humans over their bodies—has been at the center of revolutionary aspirations in Egypt. Sexual assaults, arbitrary arrests, and torture by security forces; corrupt and defunct state healthcare systems; the abuse of agricultural subsidies resulting in innutritious food products—all of these are realities that took a painful physical toll on Egyptians and helped drive them to demand an end to Mubarak’s regime. The years that followed have seen numerous flash points over the use of force against civilians, such as the tanks that ran over protesters in the Maspero Massacre[1] and the confrontations with police[2] after the Port Said stadium disaster.[3] Powerful images of violence emerged from those confrontations.

These images, the testimonies of survivors, and the outspoken advocacy work of activists and rights groups had a strong impact in the Egyptian media and on social consciousness. Justice for the dead and their families was a key demand articulated in protest chants, in articles, and in graffiti. The idea that the security forces should be held accountable to the public was nothing short of revolutionary in a population that had lived under a repressive police state for decades.

It is the conflict over women’s bodies that most often exposes social attitudes toward individual rights and freedoms and through which we can examine recent changes in body politics in Egyptian society. Women’s bodily integrity is often forsaken in favor of promises of security by powerful and paternal but abusive state institutions. Individual women and activists who called for bodily integrity after 2011 demonstrated the strength of the street in transforming public attitudes over time, with the ultimate goal of altering state institutions into forces of protection rather than abuse. However, this goal has been sidelined since the massive protests that led to the ouster of Mohamed Morsi on July 3.

When Samira Ibrahim went to court after being subjected to a virginity check by the army along with other female protesters and passersby arrested in March 2011, she was applauded by many for her bravery and refusal to be shamed into silence. But others criticized her or simply refused to believe that the military would perform such a transgression. “What was she doing there in the first place?” many people asked. “Disgraceful women like these are trying to ruin the image of the army,” one man told me. The military itself initially denied the practice, but some generals, including current army chief Abdul-Fattah el-Sisi, scrambled to its defense.[4]

Ibrahim initially won her lawsuit, but the ruling was later invalidated by a military court.[5] Despite this setback, her outspokenness was key to linking the conflict over women’s bodies to the wider revolutionary struggle.

Ibrahim’s public candor was also a precursor to discussions of body politics in the media, which over the last two and a half years have been unprecedented in their frankness and depth. Testimonies by women such as Yasmin el-Baramawy, a survivor of a mob sexual attack, illustrated how such practices happen all the time. El-Baramawy was beaten and sexually assaulted by a mob of men in Tahrir Square for over an hour in November 2012 on her way to a protest against Morsi’s constitutional changes. Two months later, she appeared on television to speak out about her attack, after several friends and acquaintances suffered the same violence.[6] The outspokenness of Baramawy, a confident and articulate middle class woman, also helped to debunk social myths surrounding sexual assaults, namely that they are restricted to very poor urban districts.

A related case, which demonstrated the state’s complicity in such attacks, was the video of “the woman in the blue bra”—a protester who was stripped and beaten by soldiers. The video went viral, and thousands of women marched through downtown Cairo to condemn the army’s violations.

The Egyptian police force is known to be useless to women who suffer sexual harassment or assault, often blaming women for the attacks by questioning their sexual behavior and choice of clothes. There was therefore a dire need for collective efforts by citizens to fight these attacks, which on some nights received verified reports of at least 80 cases. As such, when an epidemic of mob sexual assaults against female protesters broke out in Tahrir in November 2012, volunteer groups formed to respond to and intervene in the attacks.

As a member of one such group, Operation Anti-Sexual Harassment and Assault (Opantish),[7] I witnessed a transformation in the attitudes of people in and around Tahrir toward sexual assaults in a few short months. We worked by distributing fliers with hotline numbers people could call if they saw an attack. We also had our own scouts on the ground. When a report was called in, the control room would direct various teams to the reported location to both verify the attack and intervene to extract the woman or women being targeted. When we first started, the reaction we received from people was distinctly gendered and reactionary—much like the responses to Samira Ibrahim. As we distributed fliers, men would deny that such attacks happened, and they sometimes added, “We would have taken care of it” and other macho statements. Women were often shocked to hear about it. Later, after our group and others with similar goals became known in the square, and the issue had gotten significant attention through media (Bassem Youssef even hosted members of volunteer groups combating assaults on his show al-Bernameg), the reactions of protesters and passersby were completely different. Men and women listened more carefully and asked, “What can we do to help? Is it very bad today?” Oftentimes strangers would seek out group members (identifiable by their t-shirts) to report an incident.

This evolution in attitude demonstrates how the politics of the body can change on the ground through collective efforts. By contrast, on the level of professional politics, the politics of the body are often used to further an agenda rather than to address the problem itself. The Muslim Brotherhood, for instance, showed images of the assaults in Tahrir at their rallies in order to portray their opponents as depraved criminals. Female journalists, particularly foreigners, who went to Brotherhood rallies told me they were frequently asked by participants to stress that they had not been bothered or harassed. In the meantime, anti-Brotherhood politicians denied that sexual assaults were occurring at all.

All of this illustrates just how prominent body politics have been since January 25. Moreover, it shows that significant progress was made in prioritizing the right to bodily integrity for a wider segment of society through a combination of activism, media advocacy, and exposure of regime brutality. That such work was not enshrined constitutionally is a failure of the Muslim Brotherhood and other political actors. Between the Brotherhood’s inept drafting of the constitution and the constitutional acrobatics and power play between the military, the courts, and Morsi, the struggle for these basic rights was kept at the level of the street.

The military’s removal of Morsi on July 3 and the subsequent dispersal of Brotherhood sit-ins in mid-August, which left hundreds dead, created a national psyche fearful of sustained violence and chaos. A result of this situation is that talk of rights of any kind has largely been silenced. While Opantish is still operational and goes to Tahrir when there are large rallies, the larger campaign has quieted. Egyptians are under strict military curfew, keeping the country’s notoriously nocturnal population at home to consume nationalistic propaganda. Criticism of the military is not tolerated, and extreme measures are explained away under the blanket justification of fighting terrorism.

Public debate has become abstract and large-scale: “the economy” without specifics, “progress” without plans, and “security” without guarantees of minimum rights. But Egypt’s problems are specific, physical, and real. Sexual harassment and assaults, as well as torture and military trials against civilians, continue, and so does the corrupt mismanagement that denies the majority of residents meaningful prospects for safety, education, health care, nutrition, or employment.

It is only a matter of time before public pressure and anger about these violations rises again. The hope is that, when the time comes, a political mechanism or group can take the demands further than the street.

[4] Brett Borkan, “Military Intelligence Head Says Virginity Tests Conducted out of Self-Defense,” Daily News Egypt, 26 June 2011, http://www.dailynewsegypt.com/2011/06/26/head-of-military-intelligence-confirms-virginity-tests-conducted-out-of-self-defense/. Ibrahim was in fact challenging a practice used by the state to control women’s bodies for more than 150 years. Historian Khaled Fahmy has written of Egypt’s School of Midwives, established in 1832 to provide police stations with “forensics” personnel, whose jobs included carrying out virginity checks on girls brought to them by male relatives. “Police records of hundreds of such tests are kept in the Egyptian National Archives,” he writes. “They contain menial statements such as ‘found not a virgin,’ ‘her hymen has been removed completely,’ and ‘she has been used before.’” Khaled Fahmy, “Women, Revolution, and Army,” Egypt Independent, 9 January 2012, http://www.egyptindependent.com/opinion/women-revolution-and-army.

[5] Abdel-Rahman Hussein, “‘The Future of Egyptian Women is in Danger’—Samira Ibrahim Speaks Out,” Guardian, 13 March 2012, http://www.theguardian.com/lifeandstyle/2012/mar/13/women-samira-ibrahim-egypt-virginity-tests.

[6] Memorably, she presented the trousers she had been wearing and desperately clinging to at the time of the attack, as dozens of men tried to remove them. The trousers were stained with blood and sewage water and slashed in the back by the attackers’ knives.