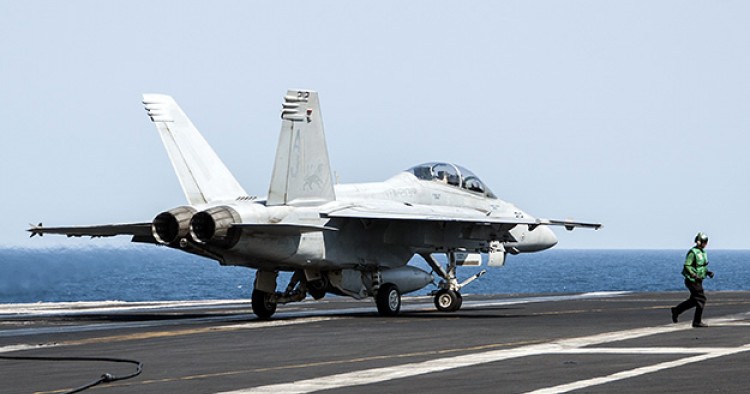 Three months ago CIA Director John Brennan told a Congressional panel that the administration fears the fall of the Assad government in Damascus, as it could lead to “Islamist extremists, including the Islamic State, Jabhat al-Nusra, and al-Qa‘ida elements within Syria to seize power from a collapsed regime.” I heard similar fears during a Congressional hearing I attended June 17.

This worry about extremists taking over from Assad would be a legitimate concern if it was remotely realistic. It is not. Neither the Islamic State nor Nusra nor any other armed faction is going to seize full power from a collapsed Assad government. The Assad government is weakening, but it isn’t going to disappear, and there is sharp competition between the armed factions, with none strong enough to vanquish the others. It has long been thus.

Finally, during the past three weeks, the Free Syrian Army elements in southern Syria halted their northward push toward Damascus to pivot west and attack another armed faction that has declared its loyalty to the Islamic State, the Martyrs of Yarmouk (the name Yarmouk harkens to an early Muslim victory against the Byzantines). As of this writing, these FSA elements are making slow but steady progress in fighting not far from the Golan Heights.

It is unlikely that the Assad government will suddenly collapse as Saddam Hussein’s regime did. Its air force is still potent, its core security units remain loyal (out of fear if nothing else), and Iranian support, as well as that of Hezbollah, is strong. That said, the dynamics of this long war of attrition have visibly shifted against it. In April-May 2013 the regime was in retreat and Hezbollah intervened with thousands of fighters to turn the tide. In June 2015, however, there is no obvious new external factor to again reverse the rising tide against Assad unless Iran decides to send thousands of its own ground forces into Syria. Even if it did, that likely would merely trigger even greater arms and logistical support to the Syrian armed opposition from Turkey, Saudi Arabia, and Qatar, whose ramp-up of aid produced the latest change in favor of the opposition. In the end, the Assad government and its supporters are the minority in Syria. The large majority of the Syrian population will not mobilize in huge new numbers to back a rapacious but weakening dictatorship. Instead, they will either support the opposition or they will stand on the sidelines hoping that the horrible conflict will end.

As the Assad government flags, there are three scenarios. The first is that Iran sends large new forces to buck up the struggling Assad, and the rough balance in the grim war of attrition is temporarily reestablished. This likely would only last until outside Sunni powers escalate with yet more material aid to the armed opposition. With new financial resources after a nuclear deal, Iran could escalate still further and trigger Sunni counter-escalations, so the war would drag on. In this first scenario, Damascus and Latakia might well become a battleground, sending yet more refugees to the Syrian borders.

The second scenario is that Iran caps its assistance and the areas under Assad regime control diminish. They won’t disappear, however. In a fight for their very survival, Assad’s troops have nowhere to run. Their military organization may suffer in some locales more than it already has, but Alawi units, backed by Hezbollah, will fight on. The opposition’s abysmal failure to reach out to Alawis has ensured this. (Nusra leader Abu Mohammed al-Jolani told Al Jazeera at the end of May that his group would fight Alawis until they converted to Sunni Islam. Such a mentality crowds out chances for a political deal.)

The real question is what the armed opposition will do. Its many armed groups now operate within a dozen major military alliances, some of which are trying to develop a common political stand. Perhaps most of the armed factions will unite into a political front that breaks entirely with extremists like Nusra and the Islamic State. Perhaps then the opposition and surviving regime elements could find their way to negotiate with strong encouragement from the regional powers. If the opposition and the surviving regime elements actually achieve an accord (and one can only imagine how hard that negotiation would be), perhaps a new, national unity government could be established that in turn would gradually rally most Syrians to fight the extremists. This scenario has so many pitfalls, however, that it is unlikely.

A third scenario is most likely. The various armed faction alliances most likely will not develop a sustainable common front and instead will compete with each other as much as against surviving elements of the regime. The result will be temporary or localized military alliances between the declining government forces and particular armed factions, each striving for short-term, tactical advantage.

The end result is very likely going to be an emerging partition of the country through which different factions and alliances divide control of Syria. Six zones are visibly emerging already, and there could well turn out to be more: (1) an Alawi/Hezbollah-controlled area along the Lebanese border and the Mediterranean coast, backed by Iran and Russia; (2) the northwest of Syria controlled by the armed faction known as the Army of Conquest (Jaysh al-Fateh), which  includes but is not controlled by Nusra and is backed by Turkey and Qatar; (3) the Islamic State will control the eastern two thirds of Syria; (4) the Free Syrian Army’s Southern Front and associated factions, backed by Jordan and Saudi Arabia, will control most of southern Syria, with pockets of Nusra-controlled areas there as well; (5) in Damascus, reminiscent of Beirut during the terrible Lebanese civil war, all of the above factions as well as the Islamic Army will hold different neighborhoods; (6) Kurdish fighters, who have benefitted from American close-air support, will control the north center and northeast. The lines demarcating control of these areas will not be fixed, and skirmishing, sudden upticks in fighting, and temporary, localized ceasefires will be the norm. This image is what some in the region call the “Somalization” of Syria.

None of these scenarios mean that Islamist extremists like the Islamic State and Nusra are going to take over after a collapse of the regime. The extremists are, however, probably going to control territories inside a fragmented Syria for many years. From there they will attract new recruits and train and operationalize plans against domestic and foreign enemies, including the United States.

Turkey has been lobbying some of the bigger, non-extremist Islamist groups that have fought the Islamic State and have avoided organizational ties to Nusra to develop a common stance about the future of Syria. The United States has little engagement with these groups and has avoided helping them against ISIS. Instead, the United States has tried building a whole new Syrian force—an effort with little to show after a year and that would only add divisions to opposition ranks if it did gain traction. The absence of serious American engagement with some of the biggest non-extremist Islamist factions already fighting on the ground now has undermined our leverage—a conscious decision by an administration that came into office looking to boost American engagement with unfriendly powers. The administration has always fluctuated between avoiding serious engagement with any of the Islamists in Syria and applying direct military force against Islamist extremists. Our pilots fly combat missions in Syria at significant personal risk. It is odd that the administration prefers that risk to our people and credibility instead of first trying a middle path, that is, enabling a serious indigenous force to counter the extremist problem as well as the Assad government, which is the root cause of the problem in Syria.

The administration thus is left in Syria trying to contain the important but secondary problem of the Islamic State. It cannot determine what the definition of success against the Islamic State in Syria is or how long the mission will last because the Islamic State’s strength depends not on the U.S. Air Force but rather on how the battle with Assad fares—and that is the battle the administration won't address directly. One would wish that the CIA and the rest of the administration, with Congressional support, would use additional policy tools like serious material aid to the more moderate opposition, and perhaps even a no-fly zone, all properly conditioned, to press Assad to the negotiating table and influence regional allies and non-extremist Syrian elements on the ground. We could try to facilitate an eventual national political deal, hard as reaching that deal truly is. It makes more sense than hand-wringing about unlikely scenarios like the Islamic State or Nusra taking over while we fly endless airstrike missions against ever more dispersed ISIS targets in remote deserts.