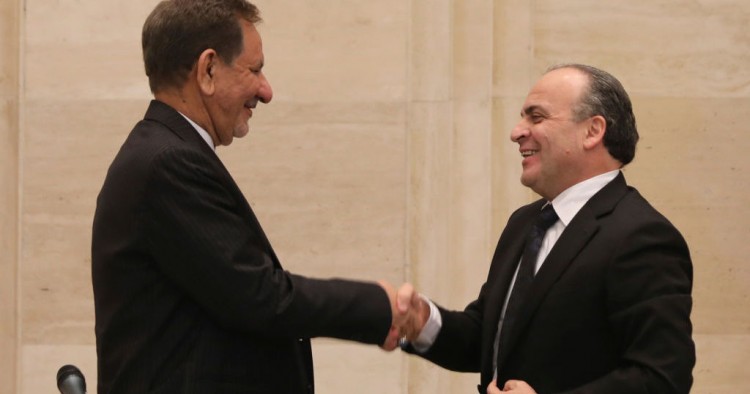 After nearly a decade of war, Syria’s economy is in shambles. The inflation-adjusted economic output in 2019 was estimated to be one-third of its pre-war level (2010). Ninety percent of the population lives in poverty.

To deal with the intensifying economic crisis, the Syrian regime has pursued various survival-mode mechanisms, like relying on financial support from Iran, spurring inflation-induced growth by printing money, and offering tempting corporate concessions to attract investment.

As in other countries, not all announced investments come to fruition. But the ratio in Syria is particularly staggering. Of the 118 projects approved by the Syrian Investment Agency in 2018, only 46 percent have taken any serious steps toward implementation as of early 2020.

A unique type of investment

Much to the country’s detriment, Syria’s economic situation has prompted the creation of a unique type of investment — one where the announcement is the only part of the venture ever intended to take place. Such “photo-op investments” happen when both parties know, before signing the contract, that the project will never break ground.

The mere announcement of this type of venture is helpful to both parties. The government appeases the public, in the short term, by reassuring them that prosperity is just around the corner. And the investors get to exaggerate their business clout.

This is very different from memoranda of understanding, where investments are announced on a “would-be-nice” basis with the genuine intention that the project will be completed. In Syria’s photo-op investments, both parties know full well that there are no plans for the announced projects to actually be carried out.

An example: earlier this month, Syria’s government approved the establishment of an oil refinery, to be built to the south of the al-Raqqa governorate in central Syria. The Rasafa refinery will be partly established and operated by Qaterji Group’s Arfada Petroleum, which is under U.S. and EU sanctions. According to the announcement, the refinery will be established with a capital of 10 billion Syrian pounds, or $4.7 million — hardly enough to purify water, let alone refine 60,000 barrels of heavy crude.

By way of comparison, the long-promised Abu Khashab refinery in Deir ez-Zor was planned at a cost of $2 billion back in 2009. A project to simply modernize the Banias refinery in 2007 was estimated to cost $600 million.

And exactly where the crude oil to be refined would come from remains equally unclear. Oil that might be smuggled from areas under the control of the U.S.-backed Syrian Democratic Forces in the northeast would likely not exceed a couple thousand barrels per day, and it’s risky business that the U.S. strongly opposes. If the refinery were to use Iranian crude — where much of the regime’s needs come from by sea — why not build the refinery closer to the coast?

Syria’s current refining capacity, from the domestic refineries in Banias and Homs, already covers the needs of regime-held areas for most oil derivatives. And Syria’s oil exports are subject to U.S. and EU sanctions. So, who exactly would this new refinery serve?

Many of the photo-op investments over the past nine years are with Iran — which has been facing its own mounting internal dissent. One of the Iranian protesters’ main demands earlier this year was to end Tehran’s regional adventures and redirect domestic resources to meet their own needs. By 2017, Iran was reported to have spent more than $30 billion propping up the Assad regime. By announcing investment projects, the Iranian regime can justify its spending by pointing out the benefits to Iran from this intervention in Syria —thus making it look like they’re getting a return on investment rather than just continuing to prop up a regime for no domestic benefit.

Iran’s photo-op investments include an oil refinery near Homs (announced in 2017) and a whopping 200,000 housing units near Damascus (announced in 2019). Neither of these projects has taken any step toward implementation.

Photo-op investments give short-term hope to desperate Syrians, but bread is in much shorter supply. Syria needs genuine investment in real infrastructure and economic opportunities. Anything else is ultimately useless.

Karam Shaar is a Non-Resident Scholar at the Middle East Institute and a Senior Economic Analyst in New Zealand’s public sector. He holds a PhD in Economics.