Art in Response to Conflict 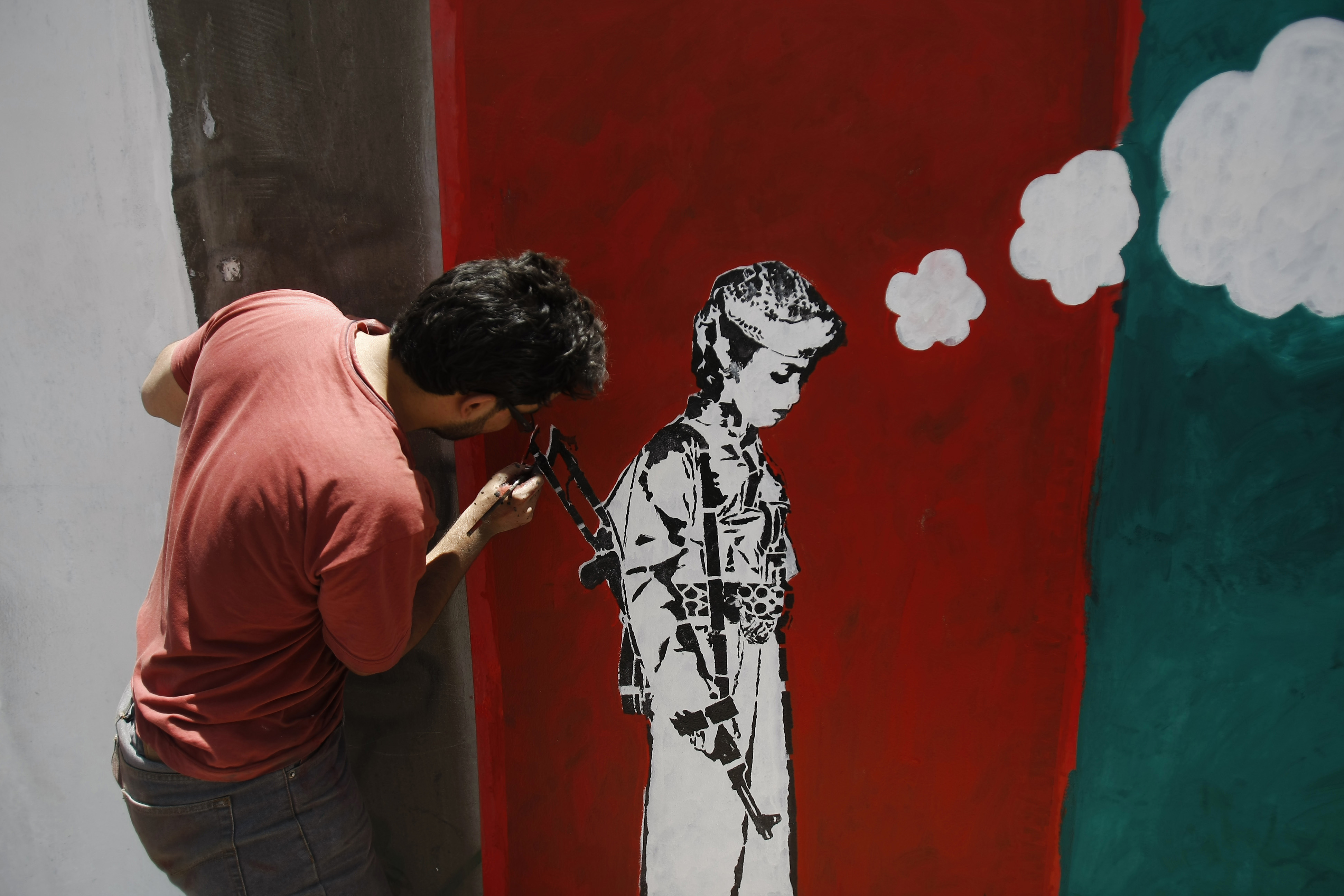 The Middle East Institute co-hosted a panel discussion exploring the value and impact of the arts in conflict zones. The panel was organized with the Media Lounge at the College Art Association's annual meeting in Washington, D.C.

The panel brought together artists, scholars, policy-makers, and experts from NGOs, international organizations, and the media to discuss the role of the arts in response to conflict, the positive impact art can have on affected communities, and its ability to give voice to despair. The panelists provided examples of artistic projects that have helped heal displaced and traumatized communities and bring about positive social and economic change. In addition, they examined the role art plays in relief work and peace-building initiatives in conflict zones such as in the Middle East, and ways to support this work.

The panelists addressed two main questions about the space for art and culture in conflict zones: What role do cultural and creative industries play within conflicts? And why are creative spaces a necessary part of conflict resolution? While addressing art’s ability to transform conflicts and empower those most affected, the panelists also discussed the challenges of extending art’s long-term impact, encouraging expression in repressive contexts, and preserving arts for future generations.

Manal Omar began the discussion by noting that in conflict zones, the arts serve both as coping mechanisms and enablers for resilience, survival, and accountability. In spaces where power is demonstrated primarily through acts of violence, arts and culture serve as an alternative form of empowerment for the disenfranchised. This was exemplified throughout the Arab Spring as citizens used art to speak out against authoritarian regimes. She also noted that creative spaces often give people a sense of joy in the midst of demoralizing and traumatic conflicts.

Paul Smith addressed how the relationship between arts, culture, and international relations has changed over the past 15 years. He argued that culture moved from the margins of conflict to the core, particularly in regards to questions of identity, notions of “home”, and ideas of exclusion and inclusion. Many of today’s secessionist movements are not driven solely by economic and political concerns, but also by cultural distinctions regarding a group’s legacy, history, and common identity.

Casey Hogel conversely discussed how culture can act as a unifier, creating spaces of common ground that bring people together. She introduced several of Search for Common Ground’s initiatives, including a soap opera written and filmed by Arab artists depicting a woman becoming the first female president of a fictional Middle Eastern country. This example showed how art can be used as a tool to explore social issues that may be too sensitive to discuss in a traditional context.

Lyne Sneige looked specifically at the role artists played as spokespeople for youth movements in the Arab Spring. Sneige used this example to show how artists are often first to contest the deepest issues facing society and how artists can present creative alternatives for better societies. She argued that practicing the arts allows people in the midst of ongoing conflict to experience a sense of normality. She concluded by stating that as powerful conductors for change, the arts must be part of solving conflict and healing post-conflict societies.

Finally, Laila Jadallah stated artists should act as provocateurs who force people to think about and consider issues that would otherwise be too difficult to speak about openly. She argued that people have greater confidence engaging with contentious issues when provided with a visual platform, including difficult and intimate questions regarding home and identity. In this way, art reduces a person’s fear of asking questions and expressing doubts about his or her society.

The roundtable closed with questions from the audience, which sparked discussions about implementing ethical boundaries in arts programming, protecting artists engaged in creative spaces, and utilizing art within conflict resolution work.

Panelists:
Laila Jadallah
Washington-based photographer and curator
Born in Geneva, Switzerland and raised in the Washington, D.C area, Laila Abdul-Hadi Jadallah has lived, worked and exhibited her photographs in Paris, Washington, and the Middle-East. After completing her B.A in arts and culture with a concentration in photography and art as social action from George Mason University in 2007, she moved to Paris to for a masters in studio photography at the SPEOS Photographic Institute. Since returning to Washington, she provides consultation services on photography and styling as well as curating, art direction, and exhibition development for magazines, arts based organizations, creative groups, and artists. Her work has been featured in the Washington Post, and on Al Hurrah TV and is in the permanent collection of the Office of Arts in Embassies at the U.S. Department of State.

Casey Hogle
Middle East Program Manager, Search for Common Ground
Casey Hogle is the Middle East and North Africa Program Manager at Search for Common Ground (SFCG), where she supports regional programs and six country offices. She provides technical peacebuilding and program management support including through in-country missions, leads assessments of new countries to conduct conflict analyses and identify opportunities, represents SFCG-MENA at donor meetings and policy forums in Washington,D.C. to promote our peacebuilding efforts, leads proposal development, and manages regional programming. Hogle has previously worked for human rights and women, peace and security organizations in the U.S. and in the MENA region. She has lived in Jordan, Libya, and Syria. Hogle holds an MA from the Fletcher School of Law and Diplomacy at Tufts University and a BA from Carleton College.

Manal Omar
Acting Vice President, Middle East and Africa Center, United States Institute of Peace
Manal Omar is the acting vice president for the Middle East and Africa Center at United States Institute of Peace (USIP). Previously, she was regional program manager for the Middle East for Oxfam - Great Britain, where she responded to humanitarian crises in Palestine and Lebanon. Omar has extensive experience in the Middle East. She worked with Women for Women International as regional coordinator for Afghanistan, Iraq, and Sudan and served as an international advisor for the Libya Stabilization Team in Benghazi in 2011. She launched her career as a journalist in the Middle East in 1996 and UNESCO recruited her to work on one of her first lead assignments in Iraq in 1997-1998. Omar spent more than three years with the World Bank’s development economics group where she has carried out training programs in Yemen, Bahrain, Afghanistan, Sudan, Lebanon, Palestinian Territories, Kenya and many other countries. She is on the advisory board of Peaceful Families Project, Prosperty Catalyst, and Women’s Voices Now.  She was named among Top 500 World’s Most Influential Arabs by Arabia Business Power in 2011 and 2012, and among the 500 Most Influential Muslims in the World by Georgetown University and The Royal Islamic Strategic Studies Centre in 2009 .

Lyne Sneige
Director, Arts and Culture Program, Middle East Institute
Lyne Sneige is the director of the Arts & Culture Program at the Middle East Institute. She has over 15 years of experience in international development in the Middle East. Before joining MEI, Sneige was deputy director Lebanon and regional projects manager for arts and culture for the Middle East at the British Council operating out of Beirut. She has extensive experience in strategy and planning as well as project management, and has many years of experience in the arts and culture scene in Lebanon and throughout the Middle East. She spearheaded several initiatives such as the Creative Economy and Cultural Leadership agendas in the region and is a strong advocate of the important role that artists play in their societies as a main contributor to changing perceptions in the Middle East and as an important conduit to social and economic change.

Tara Sonenshine (Moderator)
Former Undersecretary of State, Public Diplomacy and Public Affairs, U.S. Department of State, and Lecturer, School of Media and Public Affairs, George Washington University
Tara Sonenshine is a former Shapiro fellow and distinguished fellow at George Washington University’s School of Media and Public Affairs. She is the former undersecretary for Public Diplomacy and Public Affairs for the U.S. State Department and previously served as the executive vice president of the United States Institute of Peace (USIP).  Prior to joining USIP, she was a strategic communications adviser to many international organizations including USIP, the International Crisis Group, Internews, CARE, The American Academy of Diplomacy, and the International Women’s Media Foundation. Sonenshine served in various capacities at the White House during the Clinton administration, including transition director, director of foreign policy planning for the National Security Council, and special assistant to the President and deputy director of communications. Sonenshine was an editorial producer of ABC News’ Nightline, where she worked for more than a decade.  She was also an off-air reporter at the Pentagon for ABC’s World News Tonight and is the recipient of 10 News Emmy Awards for coverage of international affairs.

Media Lounge Co-Curator:
Jenny Marketou
Media Lounge Co-Curator and Artist
Jenny Marketou is a sociocultural initiator, artist, and lecturer works in New York City and Athens, Greece. She has taught in the art department at Cooper Union School of Art in New York and is currently on the visiting faculty at CalArts in Valencia, California. She is the author of the photography book The Great Longing: The Greeks of Astoria and the initiator of the collectives “Workshopping the Unruly” and “Breaking News,” autonomous exchange knowledge platforms between artists and grass root commons. She has lectured internationally on emerging patterns and forms of pedagogy and civic engagement in an era of accelerated globalization, neoliberal forms of individualism, and digitization. Her involvement in long-term projects and commitment to collaborative working processes exude an awareness of art’s ability to permeate and affect different institutional, social, and political structures.  Marketou’s work utilizes video, video installation, sound, internet, photography, and public performance, among other media. She was awarded an OutSet/NEON GRANT for her upcoming project “Assemblies” in 2015-2016 which will premmiere during the P.I.G.S. exhibition at the Atrium Museum in collaboration with the Guggenheim.