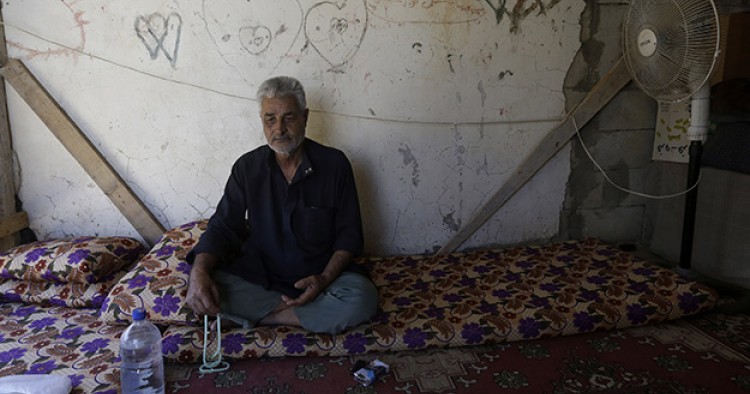 Sana managed to escape the violence in Syria by making her way to Lebanon, but now she is alone and suffering from mood swings. She is battling eviction threats from her landlord due to her disruptive and erratic behavior. Mahmoud, another Syrian refugee in Jordan, is experiencing increasing feelings of depression, worried that he can no longer provide for his wife and three children, two of whom have learning disabilities. Abdul, a seven-year-old Syrian with developmental problems living in Turkey, has difficulty communicating with family and friends, often disturbs the other families that live with his in a shared house, and is no longer able to attend school. These are just a few examples that illustrate how psychological distress and mental health problems are a heavy burden for those affected by the Syrian crisis.[1]

The Syrian refugee crisis, now entering its fifth year, has resulted in massive population displacement and a vast need for humanitarian services inside Syria as well as in surrounding countries. The impact on the mental health and well-being of displaced persons is significant and will require both short-term and longer-term solutions. It is thus critical to focus on mental health and psychosocial support, and to implement community-based mental health care.

International Medical Corps (IMC) provides mental health services through clinics and community centers, hosts psychosocial support activities for children and adults, and builds the capacity of Syrian and host population staff, such as healthcare workers, psychosocial workers, and volunteers, to deliver a range of mental health services. IMC recently undertook an analysis of current services as well as of clinical outpatient data on mental, neurological, and substance use (MNS) problems at IMC-supported health facilities serving the Syrian refugee and internally displaced populations in Syria, Lebanon, Turkey, and Jordan.[2]

The resulting report shows that many displaced Syrians continue to live in under-resourced urban areas, camps, and shelter facilities both within and outside the country. They face limited access to basic health, education, food, shelter, mental health, and other services. Types of MNS disorders are consistent across the region, with severe emotional disorders (54 percent), including depression and anxiety, being the most common, followed by epilepsy (17 percent) and psychotic disorders (11 percent). Among children, epilepsy (26.6 percent), intellectual and developmental disorders (26.6 percent), and severe emotional disorders (3.6 percent) are the most common. The availability of quality services is low due to overstretched capacity and a shortage of trained mental health professionals working in local governmental, non-governmental, and community-based mental health systems. The report also shows that services provision across countries varies; for example, early childhood development activities are not currently available in Turkey as they are in the other countries, and non-pharmacological management of mental disorders by specialized mental health care providers is not available in Syria as it is in the other countries.

International Medical Corps identified a number of challenges and recommendations:

Increase the availability of services. Services are more accessible in camps than in urban settings. In Jordan, for instance, the government now charges Syrian refugees for health services outside camps, which results in many Syrians traveling long distances to access free INGO-based services. Given that the vast majority of refugees are in urban settings rather than camps, there is a need to expand the availability of basic services to locations where services are currently limited or unavailable; this includes facilitating access to services through outreach, such as supporting mobile mental health teams.

Bridge the Turkish-Arabic language barrier. There is a continued need to allow Syrian (or Arabic speaking) health care providers to work with Syrian refugees in Turkish national health facilities, which would help Syrians and also allow health care providers to continue to practice and build skills. More Turkish-Arabic translators are also needed at Turkish public hospitals and other service delivery points.

Train and license more mental health professionals. Syria lacks qualified clinical psychologists due to the absence of academic psychology programs and licensure, as well as inadequate institutional oversight. In Lebanon mental health specialists are not trained in shorter-term proven and effective interventions that can benefit those facing conflict and crises. Similarly, in Jordan, academic mental health programs exist but are often too theoretical, and licenses are difficult to obtain. Throughout the region, there is a need to support training, supervision, and licensing of mental health professionals such as psychologists and clinical social workers; this should include training in the delivery of proven and effective psychological interventions for crisis-affected populations.

Advocate for improved national mental health service provision and policies. Despite $4.5 billion in humanitarian aid reaching the region since 2012,[5] the response does not meet increasing needs,[6] and funding will likely be further reduced in the coming years. In Turkey, health and mental health services are provided through INGO-run clinics and INGO-paid and trained Syrian doctors who are supervised by Turkish doctors; such services would cease with the discontinuation of funding. Now is a critical time to strengthen national mental health policies and systems in Syria and host countries and invest in Syrian human resources to respond to mental health needs. This can be achieved through the continued support of organizations working in line with government efforts rather than setting up parallel systems that are likely unsustainable. Syrians should also be involved in community outreach and in learning basic psychosocial support skills, which can help establish links to formal mental health care services.

In conclusion, the overall quality, availability, and accessibility of mental health services provided to Syrians are in dire need of improvement. Agencies and organizations must support the provision of accessible and sustainable mental health services and use the Syrian crisis as an opportunity to strengthen national mental health systems. They must also build local human resource capacity among Syrian and host country professionals and communities. Syrians themselves must be engaged by building their skills in community-level activities that foster resilience and social connectedness as well as involve Syrian professionals in delivering mental health services through training and mentorship. Governments should be supported in the long-term planning, review, and development of mental health policies that highlight them as essential to the overall health and productivity of the population.

[1] Names and personal details have been changed.

[4] Developmental disorders are a group of conditions with onset in infancy or childhood and characterized by impairment or delay in functions related to central nervous system maturation. World Health Organization, “Autism Spectrum Disorders & other Developmental Disorders: From Raising Awareness to Building Capacity,” 2013, http://apps.who.int/iris/bitstream/10665/103312/1/9789241506618_eng.pdf.