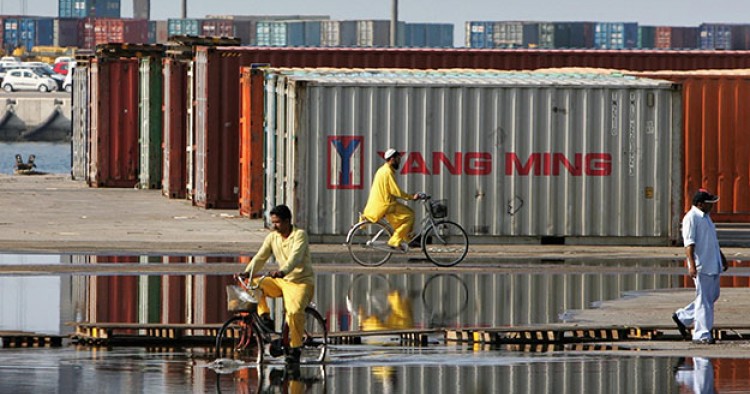 Dubai is strategically located at a junction between Europe, Africa, and the Far East. For China, an emerging global leader in trade and international business, Dubai is a promising place in which to conduct business. Exploring Dubai-Sino economic relations beckons a more comprehensive understanding of both the level of Dubai’s economic diversification and the impact of the global financial crisis. Dubai’s private sector is extensively engaged in foreign trade, with an emphasis on the service industry. The service industry has three subsectors—tourism, finance, and real estate. Assessing the trajectory of China’s involvement in these three sectors of Dubai’s economy sheds light on how Dubai-Sino economic relations have been affected by the global financial crisis.

The first visit of a UAE economic delegation to China, organized by Dubai’s Chamber of Commerce and Industry, took place in 1987.[1] Shortly thereafter, economic ties between Dubai and the Peoples’ Republic of China developed rapidly as a function of each country’s efforts to ensure its future growth and prosperity. In the early 1990s, Dubai, facing a near-complete exhaustion of its oil reserves, adopted an economic strategy that placed a heavy emphasis on private sector development.[2] The 1990s was a significant decade in shaping China’s foreign economic relations as well. China’s oil import dependence and its reliance on supplies from the Gulf in particular skyrocketed. Toward the end of the decade, the Chinese government launched the “Go Out” policy, a strategy aimed at encouraging its enterprises to invest abroad.[3] These parallel sets of circumstances laid the foundation for increased economic cooperation between Dubai and China.

For the past several decades, Dubai has sought to diversify its economy. From 1975 to 1990, Dubai’s non-energy GDP growth averaged about 8 percent. In the period immediately preceding the global financial crisis—from 2000 until 2008—the growth rate remained above 11 percent annually.[4] Over the years, Dubai has generated the lion’s share of the UAE’s non-energy revenues. In fact, exports of non-energy products from Dubai accounted for approximately 70 percent of the UAE’s non-energy exports from 1980 to 2010.[5]

The economic surge experienced by Dubai in the 1990s and 2000s was fueled mainly by tourism, foreign trade, and, more recently, by the unsustainable real estate bubble. As will be shown, these three subsectors were the engines driving the rapid development of Dubai-China economic ties in the period leading up to the financial crisis.

A Shift Eastward: Dubai and China?

In the midst of the global financial crisis, Dubai’s real estate market plunged after a six-year boom. At the center of the storm was Dubai World, the Emirates’ flagship global investment company. In November 2009, the Dubai government announced a moratorium on Dubai World’s debts which, in turn, led Moody’s and Standard and Poor’s Investment Services to downgrade the debt of various Dubai government-related entities. However, Dubai-China economic relations proved remarkably resilient. Major Chinese financial institutions such as the Industrial and Commercial Bank of China and the Bank of China released statements in November 2009 declaring that they had minimal or no exposure to Dubai World debts.[6] China State Construction Engineering Corporation also released a statement announcing that it had “no business relations with Dubai World” and that its business relations with Dubai would not be affected.[7] Furthermore, senior economist of the Asian Development Bank, Zhuang Jian, said that “the Dubai debt crisis will have limited influence on China as the country's enterprises have little exposure to the United Arab Emirates.”[8] However, in March 2010 it was revealed that China Construction Bank Corporation, China’s second-largest bank, indeed had $1.03 billion in debt exposure to Dubai World,[9] and as a result expressed its will to diversify its overseas assets.[10] There is little evidence that suggests the Dubai World debacle slowed down the overall trajectory of economic relations between China and Dubai.

By March 2013, the number of Chinese companies registered with Dubai’s Chamber of Commerce had grown by 18 percent in a span of just two years, to a total of 2,411. Along with these companies, there were a total of 200,000 Chinese expats living in the UAE.[11] Some major Chinese banks such as the Industrial and Commercial Bank of China, the Bank of China, and China Development Bank have opened branches offering an array of services, from project financing to asset management.[12] Meanwhile, PetroChina International and the Agricultural Bank of China opened branches in Dubai’s International Financial Centre.[13]

The UAE is the largest market for Chinese-made products in the GCC as well as China’s second-largest trade partner in the GCC.[16] Trade between the UAE and China has experienced growth by more than a third per year since 2000. The year 2011 closed with bilateral trade between both countries at $36 billion,[17] an increase of 40 percent from $25 billion in the previous year.[18] For 2011, Dubai was the leading emirate as a trade partner with China, accounting for 76 percent, or $27.2 billion, of UAE-China trade.[19] Some experts have predicted that bilateral trade between the UAE and China will grow to $100 billion by 2015.[20]

When comparing the UAE’s percentage of exports to pertinent regions for the years 1990 to 2010, there are salient trends. While the percentage of exports to advanced economies dropped from 61.9 percent to 25.1 percent, with European trade falling from 10.7 percent to 4.5 percent, for Asian countries exports almost doubled from 23 percent to 46.5 percent.[21] This reveals a shift in the UAE’s export portfolio, with Asian economies comprising the largest market share. Even though advanced economies played a less prominent role in the UAE’s overall market share, the Asian economies remained secondary with regard to the non-energy exports, acquiring less than 10 percent. Therefore, oil is the linchpin of UAE exports to Asia. This leaves Dubai with a less prominent role in exports to Asia. Interestingly, India accounted for over 50 percent of Dubai’s exports in 2010, followed by Switzerland at 26 percent, and all other export partners accounted for less than 5 percent each.[22]

In addition to its conventional exports, Dubai has applied a nontraditional approach to foreign trade since the 1980s by creating free zones as hubs for re-exporting activity. China has 60 percent of its exports pass through Dubai’s free zones to be re-exported to Africa and Europe, making the UAE a significant benefactor of China’s increasing export presence in the international community. Hong Kong alone revealed a continued average growth of 18 percent in re-exporting through Dubai between 1983 and 2005.[23] Even India, Dubai’s largest trading partner, relies on the re-export of Chinese goods for its Chinese imports.[24] Although Dubai produces most of the UAE’s non-energy exports, it has experienced a consistent trade deficit with more imports than exports. Therefore, in order to understand Dubai’s trade relations, imports are a key area to explore.

Imports have expanded in correlation with Dubai’s growth; from 1980 until 2010 Dubai’s imports more than quadrupled.[25] For 2010, 63 percent of imports were from Asian countries; India ranked first at 29 percent and China followed at 19 percent. As for Western countries, the United States ranked third at 12 percent, and the European countries collectively accounted for 25 percent.[26] For 2011, this trend remained.[27] However, the gap between Dubai’s imports from China and India has slowly been decreasing—China is catching up.

There have also been expressed intentions of increased cooperation in currency trade. The UAE aspires to become an offshore trading center for the Chinese renminbi. Dubai recently hosted a meeting with the Hong Kong Monetary Authority and the Chinese foreign trade minister to assess the benefits of trading with the renminbi instead of the U.S. dollar and gauge its stance as a global currency. In addition, an Arabian Business article noted that

…[t]he UAE was one of several key trading partners that last year signed a currency swap agreement with China in a bid to boost the use of the Renminbi. The UAE’s $5.5 billion agreement covers less than one quarter of the value of two-way trade between the countries, but Dubai’s Chamber of Commerce and Industry Director General Hamad Buamim says it is “an important first step and is set to expand.”[28]

There has been a recent trend of increased demand for the use of the renminbi among clients in UAE banks. This may be an indicator of an increased presence of Chinese businesses in the UAE.[29]

Not only is there growth in business transactions from China, but tourism has been a source of increased mutual cooperation. As of September 2009, the UAE and China have eased their bilateral visa policies, maximizing opportunities for both countries’ tourism industries.[30] Furthermore, Dubai’s leadership realizes that the population of 94 million Chinese citizens traveling worldwide is a worthwhile target market to tap into for expansion and further market saturation.[31] The year 2011 witnessed a 30 percent increase of Chinese tourists in the UAE, reaching 250,000 people who spent a whopping $55 billion—and this continues to increase annually.[32] Currently, there are 21 daily flights to the UAE from several Chinese destinations. Since September 2009, Chinese tourism has increased rapidly, and the UN World Travel Organization projects that China will be the world’s largest market source by 2020.[33]

Being a city that is interdependent with the global market and that maintains a diversified economy, Dubai offers an insightful case study on China-Gulf relations. With regard to the MENA region, the towering challenges presented by political instability and the financial crisis resulted in decreased FDI flow within the region. Dubai was negatively impacted by the financial crisis, adversely affecting its economic relations with Europe. Yet in the midst of this tumultuous period, China-Dubai economic relations have shown trends of expansion in several areas, from trade to tourism. If economic relations continue on this trajectory of unhindered growth, Sino-Dubai economic relations could eclipse that of India. [34] It seems that the shift in economic geography reshuffled world economies. Both China and Dubai present regionally unmatched infrastructure that provides an attractive hub for regional and international companies. With promising prospects emerging on the eastern horizon, Dubai seems to be looking toward the sunrise.

[3] Huwaidin, China's Relations with Arabia and the Gulf, 135

[20] Spenley, “From Strength to Strength: New Boost for UAE-China Relations.”

[30] “Gerald Lawless, executive chairman of Jumeirah Group, a Dubai-based chain of luxury hotels, is also co-chairman of the World Economic Forum on East Asia. He tells The Nation that this region is a growth area for his business, while more travelers from East Asia enjoy the UAE as a destination.” “UAE Ties with Asia-Pacific on the Rise,” The Nation (Thailand), 26 May 2012.