The Alawi Community and the Syria Crisis 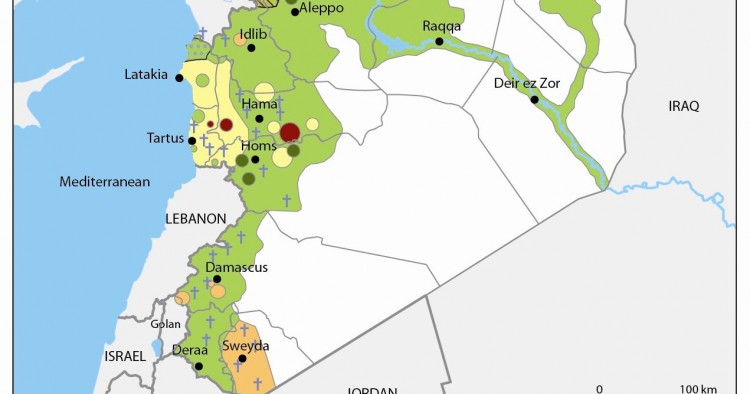 “Alawis to the grave and Christians to Beirut!” This troubling slogan was chanted during demonstrations against the Assad regime in spring 2011, and who was behind the chanting remains a controversial question. The Syrian opposition claimed that the slogan’s authors were members of the intelligence services who had infiltrated the demonstrations. According to this view, Syrian government agents were seeking to portray the opposition as primarily motivated by sectarianism and dominated by Salafis in order to frighten minorities and those wishing to live in a secular Syria.

It is still unclear whether the anti-Alawi chants were the result of meddling by the intelligence services or the expression of sentiments held by a part of the Syrian opposition. But it is indisputable that Syria has since been gripped by a civil war between Sunnis and Alawis, and that other minorities have become collateral victims. Syria’s descent into intercommunal conflict has resembled the Lebanese civil war and, more recently, the ethno-sectarian fragmentation of Iraq.

The Alawi or “Nusayri” doctrine (named after its founder, Muhammad Ibn Nusayr) was born in Iraq in the eleventh century. Like all Shi‘a, Alawis revere ‘Ali. The Alawi doctrine also includes a belief in reincarnation. This belief and the secrecy of the religion, as well as Alawis' non-use of mosques, tolerance regarding alcohol, and the fact that Alawi women are not veiled, have contributed to the spread of pejorative legends about them. In the past, the Alawis were condemned by the doctors of Sunni Islam, such as Ibn Taymiyya, who in a famous fatwa “ruled that Nusayris were even more infidel than the idolaters and declared lawful Jihad against them.”[1] Alawis were officially recognized as Muslims thanks to a fatwa issued by the mufti of Palestine, Imam Haj Amin al-Husseini, in July 1936. In 1973, due to the pressure exerted by Syrian President Hafez al-Assad on Musa al-Sadr—the Lebanese imam who founded the Amal movement—the Alawis were formally recognized as members of the Shi‘i community. However, these two “certificates of Islamic-ness” did not convince some that Alawis should reside in dar al-Islam (the abode of Islam), let alone rule Syria.

The Alawis: City Dwellers Working for the State

The Alawis account for some 10 percent of the Syrian population (2,300,000 people), compared with 15 percent in 1980. They are mainly located in the coastal region, their original homeland, but many also live in Damascus, where they have come in large numbers since the Ba‘th revolution of 1963 to join the army or the civil service. There are also Alawi communities in the eastern countryside of Homs and Hama because in the nineteenth century many were forced to leave the overcrowded coastal region to become sharecroppers in new estates created by inland landowners. 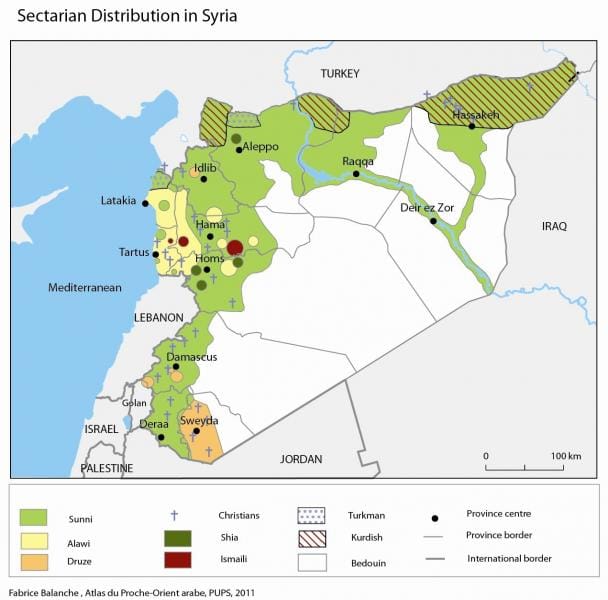 Until the French Mandate (1920-1945), virtually no Alawis lived in urban areas. They have since become a predominantly urban population, as have other Syrians, and Damascus is now the leading Alawi city in Syria. Alawis represent the majority of the population in seaside cities like Jableh, Tartus, Baniyas, and Latakia—the largest coastal city and the main port of Syria.[2] Homs, the third-largest city in Syria, has a significant Alawi minority, constituting about 25 percent of the population. However, the Alawi community of Aleppo was reduced because its members were targeted during the Muslim Brotherhood uprising in the early 1980s. Many Alawis, including a large number of villagers from the Idlib countryside, left for Latakia at that time. This same migration pattern has reappeared since the beginning of the ongoing civil war.

The emigration caused by the nineteenth-century famine also led the Alawis to settle in the Sanjak of Alexandretta and on the Adana plain in Turkey. In 1939, the Alawis accounted for some 40 percent of the population of the Alexandretta province. However, relations between the Alawis of Turkey and the Alawis of Syria are limited. Community ties were broken by the Turkization policy and the decades-long closure of the Syrian-Turkish border. Alawis also began migrating to northern Lebanon in the nineteenth century, a trend that accelerated between 1950 and 1960. In Tripoli, the Alawi population is concentrated in the district of Jebel Mohsen. In 2005, the withdrawal of the Syrian Army led to renewed fighting between the fundamentalist Sunni neighborhood of Bab al-Tebbaneh and Jebel Mohsen, and clashes between these communities continue in the current civil war.[3] 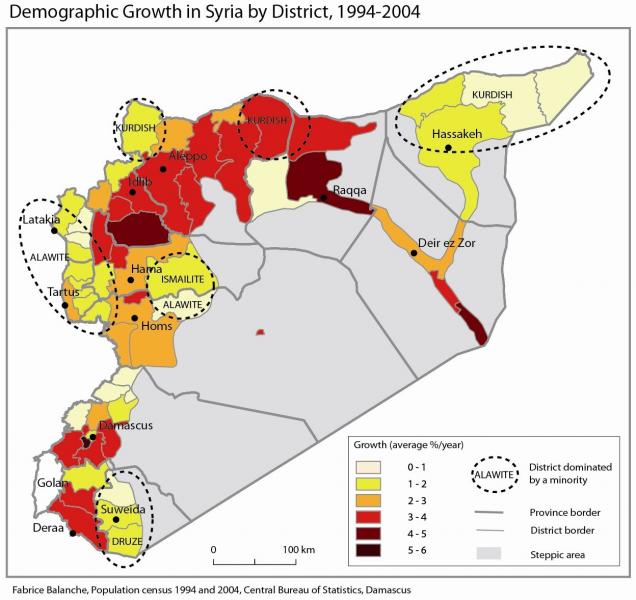 The relative decline of the Syrian Alawi population since the 1980s is due to an accelerated demographic transition experienced by all minorities—Alawi, Christian, Druze, and Ismaili. In 2011, the non-Sunni population of Syria shrank to about 20 percent, compared to 30 percent in 1980. This is due largely to women’s improved access to education and their integration into professional life. Fifty years ago, when Alawis experienced higher poverty and illiteracy rates, their fertility rate was also high, but it fell sharply as access to education and administrative jobs increased. Moreover, the Alawis, unlike the Sunnis, are not compelled to have a male descendant. While the Alawi fertility rate has fallen, that of their Sunni counterparts remains above three children per woman, even in higher social classes.[4] This demographic decline challenges the power relationships within Syrian society. Over time, for example, the proportion of Alawis in the army and the intelligence services decreased. At the time the civil war began, Sunni soldiers constituted a majority of the Syrian Army, though Alawis retained a disproportionate share of the posts held by senior officers. Since the beginning of the conflict, however, the composition of the army has changed, with Alawis the majority at all echelons. This is why it has been so difficult for the Syrian Army to defeat the insurgency and why the regime has had to depend heavily on the support of Hezbollah. Indeed, the Alawi community is unable to provide enough soldiers to fight against the numerous rebels coming from abroad and from the large Sunni population.

The Civil War’s Impact on the Alawi Community

The Alawis have privileged access to state employment thanks to their deep integration into the networks[5] of Syrian power. Obvious discrimination in public sector hiring has caused frustration among Sunnis, but the fact that Alawis are generally more assured of getting jobs does not mean that they have a higher standard of living since government salaries are relatively low.[6] Hafez al-Assad used the Alawi community to build his political system, but he did not seek to create prosperity for Alawis because he knew that their loyalty to the regime was mostly based on economic dependence.

An Alawi middle class emerged with the growth of the civil service, and over the past decade the freezing of public sector recruitment has affected the Alawi community less than any other because Alawis are protected by a system of political patronage. But the freeze has resulted in a high rate of unemployment among Alawi youth in the coastal region and has also had disastrous political consequences for Bashar al-Assad, because more than 80 percent of the Alawi community works for the state. In fact, since coming to power, Bashar has supported the Alawi community less than his father, calculating that it would feel obliged to support him anyway in order to maintain its privileges. Instead, he made it a priority to integrate the Sunni and Christian economic elites into his inner circle and share with them the benefits of economic liberalization.

The Alawi community has not always given its full support to the regime. In the 1980s, the main Marxist opposition movement, the Communist Action Party, attracted many young Alawis. In the ongoing revolution, large protests against the regime have not mobilized the Alawi community, but some Alawis have joined demonstrations, and the opposition includes many Alawi figures (such as Aref Dalila, an academic who spent 10 years in prison for his criticism of the government). However, in March 2011, when the demonstrations began in Baniyas, the majority of Alawis did not support the Sunni imams, who were asking for single-sex schools and the communitarian rebalancing of public employment “confiscated by the Alawis.”

Protests in the coastal region did not lead to an escalation of violence as occurred in Homs because the Sunni rebel enclaves were quickly contained by the army. The protests found fertile ground in Homs because Alawis represent a minority of the population in the city and the surrounding countryside. In spring 2011, the tension in Homs between the communities was palpable. Taxis refused to drive passengers from Sunni to Alawi areas, and clashes proliferated along the borders of these areas. Kidnappings and assassinations on religious grounds have also been reported. The Alawi neighborhoods have been targeted by snipers and mortars from Sunni rebel areas. Many observers have compared the ongoing violence in Homs with the disintegration of Beirut during the Lebanese civil war.

The conflict has forced hundreds of thousands of people to migrate, and many Alawi families have returned to their villages in the coastal mountain range. Fleeing Christian families have settled in the seaside resorts of Mashta al-Helu and Kafroun—near Tartus—though Christian men continue to work in Homs. The Alawis of Damascus have not left for the coast because most of them live far from the areas of insurgency (such as Douma) and from the military camps in the suburbs. But if the regime falls, the coastal region could become a haven for hundreds of thousands of Alawis fleeing Damascus and the purge of the army and the administration that is likely to follow—not unlike what the Sunnis in Iraq experienced after the fall of Saddam Hussein.

For centuries, the Alawis lived in the coastal mountains and came out only to serve as labor for the landowners of Latakia, Tripoli, Homs, and Hama. The rise to power of Hafez al-Assad provided the community a chance for upward mobility. Even if the economic and political context has changed since the days of Ibn Taymiyya, the re-Islamization process within Syrian society raises concerns in the Alawi community, especially since the military opposition is dominated by ISIS and the Nusra Front.

If the Bashar al-Assad regime is ousted, the Alawis may choose a territorial partition.[7] They could rebuild the former Alawi state created between 1920 and 1936 by France in the coastal region, though this time the external support would come from Russia and Iran.

The Syrian insurgency started for the same reasons as the revolutions in Tunisia and Egypt, but any comparison stops there. We are now facing a sectarian civil war that bears no resemblance to what unfolded in those countries. According to the opposition in exile, the regime of Bashar al-Assad has manipulated minorities’ fears to divide the insurgency and initiate the ongoing sectarian civil war. However, this narrative does not reflect the reality now unfolding in Syria. The Lebanese civil war reminds us how quickly political conflicts can be overtaken by sectarianism.

[6] High-ranking positions tend to be well paid, but they often can only be obtained through bribes.