The Asia Cooperation Dialogue (ACD) is an Asia-wide cooperation framework founded in 2002. What, if any progress has the ACD made in achieving its stated objectives and in developing a “Pan-Asian Community” since then? This essay discusses the ACD’s progress in four project areas (i.e., e-education, energy, agriculture, and finance), the convening of the First ACD Summit (in October 2012), as well as the participation of the Gulf Cooperation Countries (GCC) and Iran in the ACD’s functioning and development.

The idea of an Asian Cooperation Dialogue (ACD) was first broached in 2000 by Dr. Surakiart Sathirathai (Thailand’s Minister of Foreign Affairs from 2001–2006 and later Deputy Prime Minister).

Since the holding of the First Ministerial Meeting in Cha Am, Thailand in June 2002, The ACD’s membership has grown from 18 to 32 countries encompassing five different geographical areas of Asia: Central Asia, West Asia, East Asia, South Asia and Southeast Asia.

The ACD is aimed at fostering Asian cooperation at the continental level and integrating the several regional cooperation organizations (e.g., ASEAN, SAARC, and the GCC). The core objectives of the ACD, as agreed by the member countries, are:

Trade and financial cooperation is explicitly stated as one of the objectives of the ACD. This area of cooperation is especially concerned with enhancing Asia’s economic competitiveness in the international marketplace. The ultimate objective of the ACD is to form a single and independent entity, or “Asian Community.” This entity is expected to become a major player in its own right within the international system.

Significantly, the ACD is a forum rather than an organization. As such, it has developed in two dimensions: dialogue and projects. The dialogue dimension consists of annual ACD Ministerial Meetings. Foreign Ministers also meet on the sidelines of the UN General Assembly to review ACD cooperation and deepen the “Asia’s voice” on the global stage.

The areas of concern for which the ACD member countries encourage close cooperation and develop worthwhile projects are varied and vast. (See Figure 2.) It is worth mentioning that Gulf Cooperation Council (GCC) countries and Iran have helped spearhead cooperative efforts in energy, e-education, tourism, environmental education, road safety, and culture (as highlighted in red below). 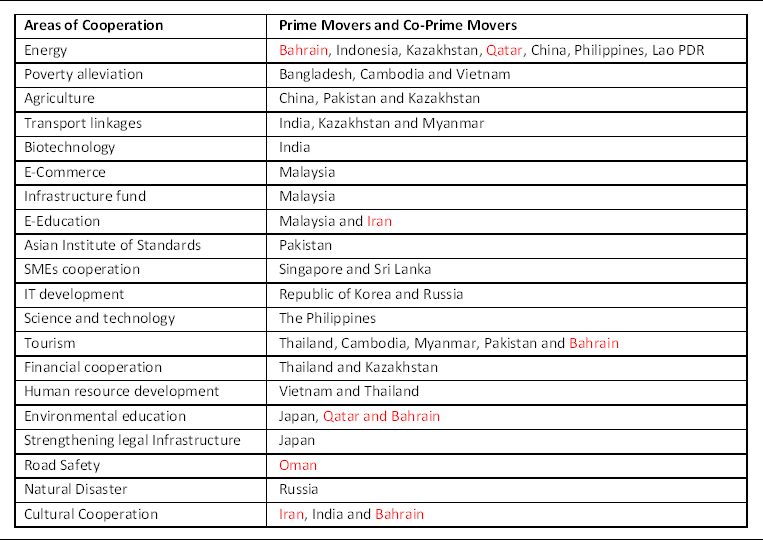 The Ministers of Foreign Affairs, who meet annually, constitute the ACD’s “higher body.” In the period between ministerial meetings, Foreign Ministers hold working meetings in which they discuss implementation of the projects and programs, exchange their views on key international and regional issues on the sidelines of the UN General Assembly session. Senior officials meetings are held in preparation for the annual meeting of the ambassadors of the ACD members in Bangkok.

The ACD comprises both oil producers and oil consumers, who are expected to respond constructively to the rising demand for energy. Energy cooperation among the ACD member countries intends to ensure energy security and promote “energy accessibility and affordability.”[2] The six ACD member countries designated as the prime and co-prime movers of energy cooperation are Bahrain, China, Indonesia, Kazakhstan, Qatar and the Philippines.

At the Fifth ACD Ministerial Meeting in May 2006 in Doha, Qatar, the participants endorsed the creation of the ACD Energy Forum and welcomed the drafting of an ACD Energy Action Plan.[3] Intended to be implemented in three years (2013-2015), the Energy Action Plan covers four core areas of cooperation: 1) the development and utilization of renewable energy resources and alternative fuels; 2) the exploration, development, and utilization of indigenous energy resources using efficient and environment-friendly technologies; 3) the promotion of energy efficiency and conservation measures/programs; and 4) the establishment of regional energy infrastructure network and linkages.[4] During the First ACD Summit in 2012, the member countries pledged their support for energy cooperation and backed the efforts to review, finalize, and adopt the ACD Energy Action Plan.

Agriculture was recommended and accepted as one of the ACD project areas in 2006 at the Fifth ACD Ministerial Meeting. Three ACD member countries — China, Pakistan and Kazakhstan — have taken the lead on agriculture projects. According to a concept paper proposed by China, the ACD strategies are expected to provide a venue for agricultural cooperation and exchanges among the ACD member countries. ACD agricultural cooperation focuses on agricultural trade, food security, and the quality of life in rural areas through information sharing on agricultural development and policy, the promotion of sustainable development, and the holding of relevant training courses.

China has taken the lead by organizing many seminars, forums, training courses, and relevant projects. The first such activity took place in October 2006, when Beijing hosted the ACD Agricultural Officials’ Seminar. The seminar involved officials from 20 ACD member states to study China’s agricultural development. In 2008, Beijing held a forum on the wholesale market in agriculture, in which participants from ACD countries shared their market management experiences.[5]

The ACD member states required increased financial cooperation for several reasons. In the 2000s, Asian economies had limited sources of long-term finance stemming from underdeveloped capital and bond markets. The financial crisis that hit the Asian economies in 1997 necessitated the development of a regional financial architecture. This initiative could ensure financial stability in the region, specifically during periods of global imbalances, volatility and uncertainty.[6]

The GCC countries and Iran have embraced the opportunity to participate in the ACD. Qatar and Bahrain are the founding members and the rest joined the ACD in the following three years.  Some have played key roles as “prime movers” or “co-prime movers” of project areas: energy (Bahrain and Qatar), e-education (Iran), tourism (Bahrain), environmental education (Qatar and Bahrain) and cultural cooperation (Iran and Bahrain).

In 2012, Kuwait demonstrated “the importance of its Asian outreach…”[8] The Emir of Kuwait, Sheikh Sabah Al-Ahmad Al-Jaber Al-Sabah, demonstrated his personal commitment and high confidence in promoting mutual cooperation among the ACD member states. His government strongly urged that all heads of state attend the First ACD Summit and thereby seize the opportunity to renew their collective efforts, consult more, and improve coordination. Previous ACD meetings, which had been held at the ambassadorial and foreign ministerial levels, had had an important limitation. As one commentator observed, "the difficulty of the earlier meetings from 2002 onwards was that nothing tangible was accomplished. Therefore it was not a serious dialogue." [9]

At the First ACD Summit, Kuwait called upon member countries to mobilize US$2 billion to benefit under-developed Asian countries (mainly non-Arab countries) in carrying out mid-sized projects. In a show of leadership, Kuwait then made a significant contribution of its own to this effort by pledging US$300 million.

Outlook for the ACD: Fulfilling Its Potential?

The ACD’s future looks promising. The 11-year-old ACD has taken important steps in becoming a relevant, constructive pan-Asian body with a forward-looking agenda, concrete plans and projects underway, and some noteworthy accomplishments. Iran and the GCC countries are active participants and in some respects, key players.

Conforming to core values, adopting a practical approach, and affirming strongly held beliefs have been the hallmarks of the ACD since its founding. One of the ACD’s nine core values is respect for diversity, which has helped to cement the civilizational and cultural connections between Muslim and non-Muslim countries. Respect for diversity also helps to promote harmony and understanding among the member states. The communiqué issued at the conclusion of the First ACD Summit highlighted the appropriate ways of dealing with different religions, stating: “The Summit affirms the importance of respecting all religions and beliefs, the right of freedom of expression and condemns any disrespect to religious figures.”[10] ACD member states hold a profound belief in the role of civilizations, cultures and religions. These three components are seen to boost cooperation and promote harmony among the member states.

Strict adherence to the core values of voluntarism and non-institutionalism has been both an asset and a liability for the ACD. Voluntarism and non-institutionalism have led to a “flexible model” of cooperation that has made participation in the ACD more appealing to its disparate members. In this regard, these values have served to nurture the development of an “Asian Community” and pool resources for common action. At the same time, however, they have impaired the ACD’s functioning on a practical level. There is a pressing need for a central administrative unit that will perform the ACD’s work more effectively and ultimately more successfully. In the report of the First ACD Summit, some member states (notably, Kuwait, Thailand, and Tajikistan) proposed the establishment of a secretariat which they believed would support and strengthen the ACD’s work. Kuwait expressed interest in hosting the ACD’s headquarters.[11] Unless and until a way can be found to reconcile the values of voluntarism and non-institutionalism with the requirements for the efficient and effective implementation of activities its members have agreed to undertake, the ACD will remain a useful vehicle for pan-Asian collaboration, but one whose potential to contribute to the wellbeing of ordinary people throughout Asia will not be fully realized.