Atrocities in Syria: Who Will Be Left to Speak for Me? 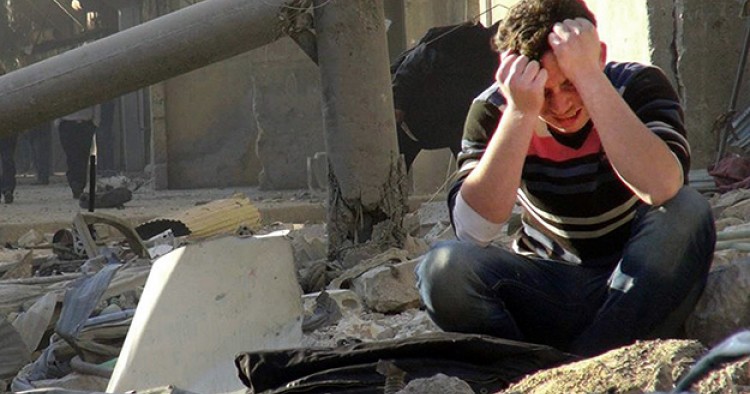 “Then they came for me—and there was no one left to speak for me.” - Martin Niemöller, German anti-Nazi theologian

On the night of March 16, 2015, reports and videos surfaced of another chemical weapons attack inside Syria. According to reports from medical workers and first responders inside Syria, government helicopters dropped barrel bombs on buildings in the northeastern town of Sarmin, and a chemical agent quickly spread because of the wind. Videos of the incident showed children, women, and men foaming at the mouth and experiencing extreme respiratory symptoms. Six people were killed, and over 70 were affected by the attack. The response from the global community has largely been muted.[1]

Then, on March 24, 2015, reports surfaced of yet another chemical weapons attack in the nearby towns of Binnish and Qmenas, where at least 30 people were being treated for suffocation. These chemical attacks violate the Chemical Weapons Convention, which Bashar al-Assad signed in 2013 after the sarin attack in Ghouta in order to prevent being bombed by the United States. Since that time, the UN Security Council passed Resolution 2209 condemning the use of chlorine as a weapon of war and stating that it will impose measures for non-compliance. On March 26, 2015, a second chemical attack in the city of Sarmin was reported.[2] It seems that the global community has again lost its voice in response to these attacks.

It is often said that the reason for this silence is because the problem is too complex and that the voices of moderates have been lost. This implies that Syria is now a nation of extremists or that the notion of “moderate” cannot apply to anyone who chose and chooses to defend his or her family and community against atrocities. These Syrians—the moderate opposition, including everyday Syrians protecting themselves—are often erased from the Western narrative for choosing to live rather than be slaughtered by the regime, ISIS, Hezbollah, and other foreign mercenaries, in a situation Western commentators have never been in and hope never to find themselves in.

In the meantime, the world continues to fixate on the symptom of the disease, ISIS, rather than the cause of the disease itself, Assad. In addition, the world only responds when certain people or policies are targeted. When ISIS killed over 700 tribesmen who rebelled against it in Deir Ezzor, the world lost its voice, but then miraculously found it when ISIS captured and killed foreign aid workers and when ISIS challenged U.S. involvement in Iraq.

One good deed that the international community does undertake is its provision of humanitarian aid to the millions of people drawn into a conflict they neither asked for nor initiated. But this aid is not enough. In order to defeat the root of the conflict—Assad—global leaders must cease their silence. This means doing more than releasing statements demanding that the Syrian regime and its allied militias and ISIS cease attacks on civilians or respect international law and norms. To bring about a stable political solution, global leaders must implement a demilitarized humanitarian zone and put an end to the use of chemical weapons and barrel bombs on innocent civilians.

President Obama himself seems uncomfortable with the implications of his 2013 red line. Just this month, he told Thomas Friedman of the New York Times that it is a “[core U.S. interest] that children are not having barrel bombs dropped on them, that massive displacements aren’t taking place."[3]

The United States must work in concert with global leaders to generate sufficient will, through the imposition of consequences and accountability, to change the calculus of the Syrian regime. To do that, the Obama administration will have to view the Syrian crisis from a perspective separate from the Iranian regime. The United Sates must lead. If it does, the global community will follow. Part of this mission must be to create the political will to simply save real human lives. After all, there can never be a diplomatic agreement if any of the parties who should be at the negotiating table are dead, in jail, or psychologically scarred beyond repair.

The barrel bombs must end. The use of chemical weapons, rape, and starvation as weapons of war must end. The torture of tens of thousands of innocent people in regime jails must end. The Syrian people need the international community more than ever. When the Syrian war ends, and it will as all things do, the world will likely count the costs of its inaction. As Martin Luther King, Jr. said, "The ultimate tragedy [will be] not the oppression and cruelty by the bad people but the silence over that by the good people." If world leaders continue to ignore the problem, hoping that it will die or fade, eventually each of us will have to ask ourselves, Who will be left to speak for me?