The Black Bloc: Evolution of the Revolution 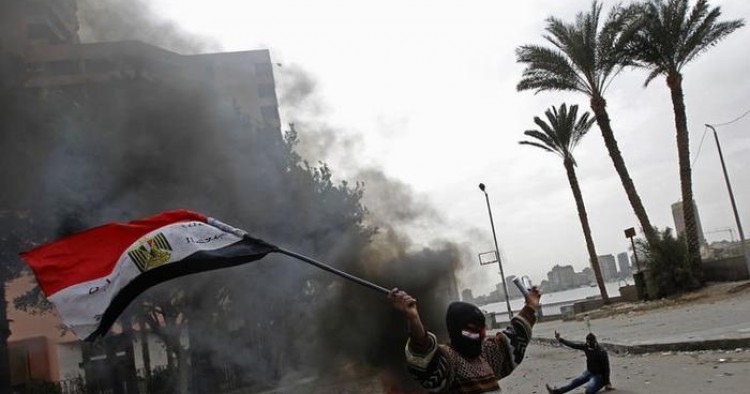 In March, Egypt’s public prosecutor announced the summoning of five members of the largely unknown group the Black Bloc.[1] The group, which takes its inspiration from “black blocs” the world round who wear black masks in order to protest anonymously, is known for such actions as halting public transportation and aiding people in distress. The group has garnered much interest both on the Egyptian street and in international media, and though they have been overhyped, they reflect a real sentiment in Egyptian street politics.

Who Are the Black Bloc?

In January, the public prosecutor described the Black Bloc as a terrorist organization and noted his orders to arrest its unknown members.[2] But there was nothing concrete to which to point in terms of evidence. Only a video filmed in Alexandria in which Black Bloc members vow to fight against the Muslim Brotherhood’s “fascist” regime in order to “liberat[e] the people, end corruption, and bring down tyrants,”[3] as well as appearances during protests, contained traces of the group.

Members of the Black Bloc are said to have urged “regular” protesters to wear masks and join them. Many young people, both male and female, responded to this call and were spotted during the marches. In one particular march from Shubra to Tahrir on 25 January, these “regular” protestors walked away as minor rock throwing clashes erupted, as they were not inclined to enact any of the violence promised in Black Bloc communiqués.

Media reports have recounted Black Bloc activities such as blocking the tramway in Alexandria, protecting foreigners from xenophobic attacks, and aiding women subject to sexual harassment in Tahrir Square.[4] It is difficult to establish whether the original group that called for such acts actually performed any of them, given that it claims to have no social media presence,[5] that anyone can masquerade as a Black Bloc member, and that due to the theatrical nature of the tactics, other protestors are likely to claim responsibility for acts even if others undertook them.[6]

This highlights a main point about the Black Bloc: the group is actually not a group per se, but is a strategy launched by el-moshaghibeen (roughly translated as hooligans). The members explain via videos that the Black Bloc is not an entity, but a strategy for resistance, and that groups should form based on a circle of trust rather than follow any rules claiming to be those of the Black Bloc.[7]

The formation of the Black Bloc certainly raised the profile of the el-moshaghibeen. The activities of these “hooligans” had not been previously picked up by the international media, such as Operation Zero on 9 October 2012, in which they burned a police truck.[8] Plans to start the Black Bloc were announced on 9 January 2013 as a more eye-catching and inclusive tactic.[9] The theatrics worked. The Black Bloc rose to instant fame and received a letter from black bloc anarchists in the United States.[10] It also captured the attention of the Egyptian street and, more dangerously, that of the regime.

The Black Bloc or the Regime: Who to Fear?

In an ordinary context, the Black Bloc would have been threatening to society, as its activities disrupt power structures and encourage vigilante justice, which can quickly descend into criminality. But Egypt’s institutions are now viewed by many as closer to a criminal force than to a source for justice. Despite the uprising, the police continue to serve an oppressive regime, and they have turned more brutal, kidnapping activists, protesters, and citizens and at times killing them by shooting or through torture. It is also important to note how the general public has perceived the mass protests over the past two years as futile, particularly the colossal marches that took place in November and December 2012 denouncing Morsi’s autocratic constitutional declaration--to which the regime took little heed.

In a sense, the state has escalated street action. Muslim Brotherhood leaders urged their followers to disperse a sit-in and protect the presidential palace in December by any means necessary. Brotherhood members arrested and tortured anti-government protesters in an attempt to force confessions. By sanctioning the attack of protesters at the hands of civilians, the presidency and the regime helped divide the citizens of Egypt into Brotherhood supporters and “the rest.”

To add insult to injury, when Morsi addressed the nation on 6 December following the clashes at the palace, he spoke of confessions collected by the investigative authorities  implying  involvement from “some who identify themselves as political forces.” The head of the Heliopolis court charged with the investigation, Mostafa Khater, subsequently exposed these statements as lies when he described the pressures exerted on him by the public prosecutor, Talaat Abdallah, who requested that he lock up some citizens who were impoverished or jobless, and thus vulnerable, without proof.[11]

In light of such events, Egyptians have found themselves unable to count on state institutions to bring about justice or change. This is why a disruption to the system in the form of the Black Bloc has not been frowned upon in the eyes of many. The group claims to not want to disrupt the lives of ordinary citizens, but rather to disrupt the regime that has alienated many factions of Egyptian society.

However, as can be expected, there are still some in Egypt--whether they are in support of the regime or in search of stability--who do not accept the idea of masked men offering protection to citizens in place of the police.

Tip of the Iceberg

The Black Bloc is but the tip of the iceberg of Egyptian street politics; as such, more important is the berg submerged beneath. The Black Bloc is thus representative of an already existing shift in the street that resists the police and the Muslim Brotherhood by using less peaceful means.[12] Those in power are reverting to old tactics in order to reinstitute a defunct method of ruling, against which people have revolted, while the younger “Facebook generation” is becoming more radicalized and is exploring more creative forms of protest. While older power-wielding men try to restore a system that failed, younger people, such as those in the Black Bloc, are developing new strategies to build on earlier ones that did not bring about change successfully enough.

For its part, the regime has been constantly searching to pin violence and failures, including its own atrocities, on someone else. In the past the United States, Israel, or Iran served as scapegoats. More recently Mubarak and the remnants of his regime are identified as the problem, although usually it is an unidentified third party who is blamed, though he or she or they are never captured‑‑not even on tape. Thus the Black Bloc presents itself as a perfect scapegoat, as it is an entity that can be accused of almost anything. It is an enemy almost as faceless as the rest; it is only the masks that give the face a form, which is all that is needed.

The fact that the Muslim Brotherhood is targeting a group that is inconsequential in terms of actual damage it can physically inflict indicates that the Brotherhood has something to fear. The idea of anonymity adopted by the masses has long unsettled the Brotherhood, even from the time of the first anniversary of the uprising. At that time, the newspaper of the Freedom and Justice Party‑‑the political arm of the Brotherhood--warned that anyone wearing a “bandetta” mask (a Guy Fawkes mask made famous by the film “V for Vendetta” but misspelled by the newspaper) was in the streets to cause chaos. Al-Gama`a al-Islamiya, a key ally to the Muslim Brotherhood, condemned the youth and formed a bloc of their own to counter them.[13]

Many within the revolutionary circles have debated whether the appearance of a group such as the Black Bloc that is willing to act radically in an organized capacity is beneficial or a deterrent to the revolution. On the one hand, the group spreads the idea of resistance in a popular form, enticing protesters to adopt a more radical tactic in the face of a deaf regime. Yet it also provides the regime with an enemy to blame without evidence, even for acts of thuggery known to be constantly executed by the government’s security apparatus via its network of criminals.

As a result, the regime has exploited the group by attaching to it any act of violence or vandalism, and for this reason the Black Bloc has halted its activities. It is unlikely that the core group will return to using the same tactic. Yet something remains unchangeable, which is the ability of an obscure radical group to create a whirlwind of debate and to shift rhetoric. There is no guarantee that others will not use the same masks and strategies to fight present or future oppression.