The Brothers and the Copts 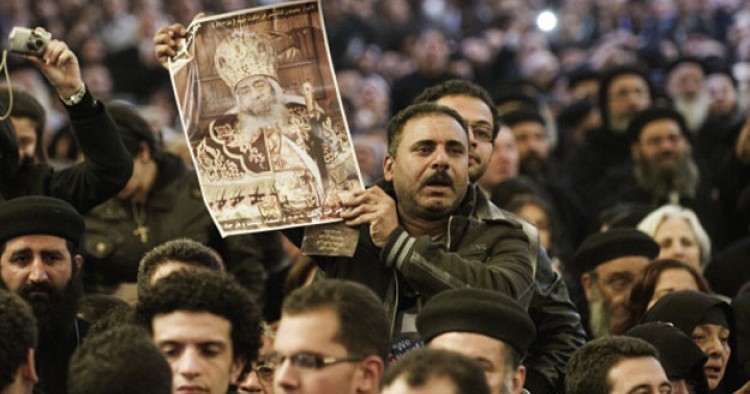 The Muslim Brotherhood may have underestimated the large numbers that responded to Tamarod’s plea to take to the streets on June 30 to call for early presidential elections, but they did bet correctly on the Coptic contingent. A few days before the protests and throughout the week of demonstrations, media sympathetic to the Brotherhood launched a campaign that represented the protests as a Christian conspiracy against Islam. The campaign was staged with an intensity that was sufficient to catalyze bloody sectarian clashes. On the Muslim Brotherhood-affiliated television channel Misr 25, Noureddin, a program presenter, made a fictitious announcement that Christians were attacking mosques. On an Islamist-affiliated channel, program guest Shaykh Mahmoud Shaaban, a Salafist, concocted a story that Christians had congregated in Tahrir Square and that their main chant was “Jesus is the solution,” as if Christians were countering the Muslim Brotherhood slogan, “Islam is the solution.” The campaign was also accompanied by threats that warned Copts not to participate in the protests.[2] However, such threats did not deter Copts from taking to the streets, and they deliberately framed their participation in patriotic rather than sectarian terms.

The Brotherhood and sympathetic Islamist movements have consistently represented the opposition as remnants of the regime and Copts. When Ahmed Shafik won 49 percent of the vote in the presidential election, it was attributed to the Copts. Yet this is statistically impossible, as the governorates with the highest concentration of Christians (Cairo, Alexandria, Minya, and Assiut) offered a negligible percentage of votes for Shafik.[3] When hundreds of thousands of protestors flocked to Ittihadiya Palace in November 2012 to protest Morsi’s presidential decree that granted him sweeping powers, Mohamed el-Beltagy, head of the Freedom and Justice Party, the Muslim Brotherhood’s political arm, claimed that 60 percent of the protestors were Christian.[4]

However, if the above narrative shows a deliberate attempt to vilify the opponents as infidels, it also indicates an awareness on the part of the Muslim Brotherhood that the Copts do represent a political constituency that they should fear. Why else would the Brotherhood incite such sectarian hatred against the Copts right before the June 30 protests?

There is no doubt that in contrast to the pervasive image of apolitical Copts hiding in a cacoon (church), Copts have long been politically active both in national struggles as well as in making demands for the recognition of their own rights. As such, they represent a political constituency whose power emanates from numbers. What is critically important to note, however, is that they are neither a constituency of a political party nor of the church. Instead, they have been a political constituency against the Brotherhood regime and are likely to act as such against any regime that marginalizes them. While the Copts are not a monolithic entity, as they exhibit diversity in their political, class, and geographic affiliations, they have nonetheless been experiencing a growing collective self-awareness due to attacks against them based on religious grounds. While such awareness has not produced a unified political group, there is nonetheless a constituency that is capable of rising en bloc. In the Egyptian context, in which opposition parties have struggled to forge a constituency with limited success, no doubt the Coptic political constituency has and will affect local politics.

What drove Copts to go out in large numbers? Some factors are the same as those that drove all Egyptians to revolt: the absence of safety and security, increasing impoverishment, and the political monopolization of power in the hands of the Brothers. However, there are religiously mediated forms of encroachment that were specific to Copts. Social cohesion suffered a deep blow under Morsi’s rule.[5] Politically, the Muslim Brotherhood used the Copts as a scapegoat for its failure to build legitimacy within the wider polity. On a macro and micro level during Morsi’s reign, the Copts were at the receiving end of intense hostility for their opposition to the president. Socially, the discourses and practices intended to vilify Christians as infidels or blasphemers against Islam permeated villages, towns, and cities alike. Economically, the imposition of ransoms and levies on Copts became quite prevalent in many parts of Upper Egypt, affecting whole villages in Assiut and Minya.

But it was not just the day-to-day living conditions that drove Copts to abhor the Muslim Brotherhood. Well before the Brotherhood came to power, Copts had an ideological resistance to notions of religious-mediated citizenship. For many Copts, the ousting of Morsi brought a sense of hope of the possibility of a different system of governance not mediated by religious affiliation. However, in the meantime they are witnessing a backlash against them that is based on their religious identity. On the night that Defense Minister Abdul Fattah el-Sisi announced the ousting of Mubarak, pro-Morsi factions roamed some of the main streets in Minya, firing shots in the air and chanting “Oh how pathetic, oh how shameful, the Copts have become revolutionaries.”[6] For pro-Morsi supporters, the Copts’ participation in the uprisings represented an affront on many levels: it indicated that non-Muslims do not know their place, that is, subservience to the Muslim ruler; that Muslims allied themselves with non-Muslims, the infidels, against them; and that a war of infidels against Islam is underway.

In Minya alone, there have been more than six attacks on churches in the past six weeks. And on July 28, in the Cairo funeral procession of two Muslim Brotherhood supporters who had died in clashes with security forces, mourners threw stones and Molotov cocktails on two churches as they walked by.

But there have also been indications of hope, at least among the citizenry. In the village of Degla, there were attacks on a Coptic Catholic and Coptic church, but in a sign that the tides may be changing against political forces that try to instrumentalize sectarian violence for their own political ends, Muslim residents opposed and overcame them.[7]

On August 8, pro-Morsi supporters passing in front of St. Mary’s Church in Beni Suef chanted “Tawadros, you coward, call back your dogs from the square” and “Islamic! Islamic! In spite of the secularists,” an expression that was also featured in the graffiti they drew on the walls of the church. When the crowd tried to forcefully enter the church, Muslim citizens in the vicinity formed a human chain to stop them. However, later in the day, unknown pro-Morsi supporters hung the black flag of al-Qa`ida on the front door of another church in Beni Suef.[8] Similar flags have been found on churches in the Upper Egyptian governorate of Sohag.

Human Rights Watch also announced that several attacks on Christians have taken place in governorates across Egypt, including Luxor, Marsa Matrouh, Minya, North Sinai, Port Said, and Qena, during a period of less than three weeks after Morsi’s ouster.[9] In many of the incidents, witnesses told Human Rights Watch that security forces failed to take necessary action to prevent or stop the violence.

Clearly it is going to take a political will on the highest level to send clear and consistent signals that there is no complacency in protecting citizens from sectarian violence—but so far there is no sign of such a will in post-Mubarak, post-Morsi Egypt.

Fears abound that just as the participation of Copts in the January 25 revolution did not translate into their empowerment in the new status quo, so too this time their activism will be followed by non-recognition. The revision of the constitution to address articles that can potentially be applied to discriminate against citizens on the basis of religion will be the first litmus test of whether a new inclusive political order is in the making. Any new regime will have to contend with the fact that while the Copts’ political activism will not lead to a complete reconfiguration of power, there is still power in numbers that can certainly affect the legitimacy of the state.

For the time being, however, there is a pressing existential threat: the greater the intensity of the security crackdown on the Muslim Brotherhood, the more ferocious its backlash against the Copts. In the month that has passed since the new interim government took office, there has been a demonstrated lack of security in preventing assaults, a continued reluctance to undertake speedy investigations, and, despite the obvious sympathy of Muslim citizens who have battled pro-Morsi sympathizers to protect churches and the property of their fellow citizens, a dearth of political will on the part of policy makers to enforce a zero tolerance policy toward sectarian attacks. If this muted response continues, the transitional government will lose its legitimacy as quickly as it gained it. The West has been complicit in the politics of omission: while policy makers and the media are quick to condemn the violence perpetrated against the Muslim Brothers, they make no mention of the terror to which citizens and entire communities are being exposed and the violence that they are experiencing on an almost daily basis at the hands of Islamist movements.

[3] Mariz Tadros, Copts at the Crossroads: The Challenges of Building Inclusive Democracy in Egypt (Cairo: The American University in Cairo Press, 2013), 230-231.