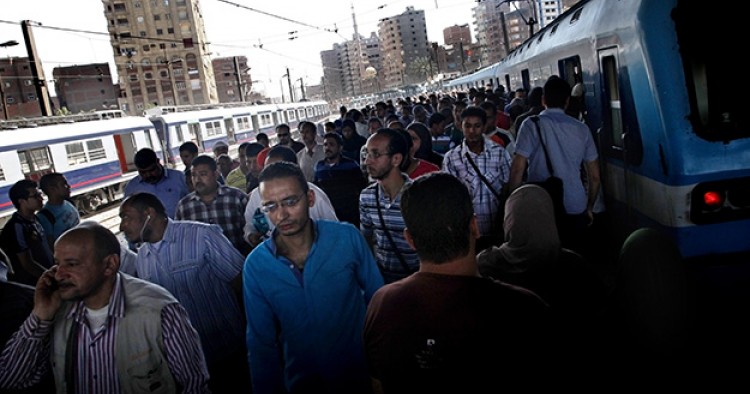 Inaugurated in 1987, Cairo’s Metro was Africa’s first inner-city underground and the embodiment of Hosni Mubarak’s promise to modernize Egypt’s infrastructure. It is hard to think of a Mubarak-era project that was better planned, more efficiently executed, or has had such a functional impact on so many people’s lives. Serving four million passengers daily, the Metro is the fastest, cheapest means of navigating the traffic-congested urban behemoth. As such, it offers indications of the social pressures facing the citizens of Egypt’s capital and the political and economic policies that contribute to them.

During the Metro’s construction in the 1980s, downtown Cairo looked like a patient on an operating table. There were gaping holes everywhere. Telephone cables trailed colored-wire nerve endings, signaling outages that might last weeks. Gigantic water pipe arteries were severed and left to dangle and ooze, leaving entire neighborhoods high and dry. Yet Cairenes greeted these hardships with forbearance and not a little pride, owing to the scale and sophistication of the Metro project and its expected benefits for their mobility.

As with the raising of the Aswan High Dam, state media covered the Metro’s progress in detail. Line Two involved digging 10.5 meters beneath the Nile riverbed using a drilling machine dubbed Nefertiti, equipped with technologies developed during the construction of the Euro Tunnel. A 1999 Ministry of Information press pamphlet, “The Underground, Another Hi-Tech Showcase,” emphasized that financing for Line Two was sourced domestically, “reflecting positively on the [state’s] image and the strength of the Egyptian economy.”

Since 1987, the Metro has steadily expanded its reach on three lines as per its original design. Lines One and Two run north to south, covering 27.3 and 13.4 miles, respectively. An extension to Line Three, the east-west axis of the railway, was recently opened, and groundbreaking for the final phase of its 19-mile length began last month. Cairo’s Metro is one of the world’s busiest light rail systems, and with tickets priced at a flat rate of one Egyptian pound (13 cents), it is the world’s second cheapest.[1] It is not, however, the most comfortable, particularly in summer when it’s like riding in a toaster oven.

A contradictory etiquette prevails on the Metro, whereby precious seats are courteously relinquished to the elderly, the infirm, and people with infants. Even a six-inch slice of empty bench space is considered fair play; if someone eyes it, passengers on either side automatically squeeze closer so that the newcomer may wedge him/herself in. But when it comes to boarding and exiting the trains, all bets are off. People behave as if securing a place in a lifeboat, creating a panicky press of conflicting currents between those trying to get in and those wanting out. Egyptians are accustomed to tight spots, and most men manage them with civility, affording women some tiny fraction of space or at least a studied indifference when stuck in a crowd. Some, however, take advantage of the press to molest whoever is at hand.

Sexual harassment is reportedly on the rise in the Metro owing, paradoxically, to “security concerns.”[2] Sadat Station (beneath Tahrir Square), one of two places where passengers can switch lines, has been closed since August 2013 for security reasons. A week before the closing security forces had dispersed a large demonstration in north Cairo in support of ousted Islamist President Mohamed Morsi, killing over a thousand citizens. The closure was designed to impede protestors’ access to Tahrir Square. Since then, everyone wishing to change lines must use Mubarak Station (beneath Ramses Square), renamed al-Shohada (The Martyrs) in the wake of the 2011 revolution, resulting in extreme overcrowding—and with it, more opportunities for groping.

Volunteers from an anti-harassment initiative called Shoft Taharosh (I Saw Harassment) attempted to monitor the situation at al-Shohada but were removed by security personnel, who cited “the country’s current situation.” A coordinator for the initiative met with police and Metro authorities to request their assistance, but was told that his volunteers weren’t needed.[3] Repeated public demands that Tahrir Station be reopened to ease the intense crowding at al-Shohada have failed to convince the authorities.

The ongoing security crackdown has succeeded in discouraging a variety of citizens’ initiatives but has failed to prevent an unprecedented number of bombings in Cairo in the last year. Crude bombs (gunpowder-filled plastic tubes) exploded in four Metro stations on June 25, 2014, causing several injuries. The bombings came a week before the one-year anniversary of Morsi’s ousting, and “Muslim Brotherhood terrorists” were named as the perpetrators.[4]

Metro accidents are rare compared to those occurring on Egypt’s old, poorly maintained main railway lines.[5] However, a Metro driver on Line Three was gravely injured on April 26 of this year when his brakes failed and the train crashed into a barricade. No passengers were aboard. The state-affiliated Egyptian Company for Metro Management and Operation (ECMMO), which employs 7,500 workers, blamed the driver. Metro workers staged a brief strike, claiming that the Company had ignored their demands to perform maintenance.[6]

The Independent Union of Egyptian Metro Workers was established shortly after the 2011 uprising. In November 2012 it staged the first strike in the Metro’s history to protest, according to organizer Refaat Arafat, the facility’s “crumbling” infrastructure and “tight-fisted” management.[7] Workers believed that the Metro had been purposefully allowed to dangerously deteriorate in order to justify its privatization, but the public was unsympathetic to their concerns. When the strike began at 5 a.m. November 14, commuters attempted to crash the closed gates to Metro stations and striking workers were attacked, causing the police to intervene. After a four-hour shutdown, several of the strikers’ demands were met, including increased wages and the resignation of ECMMO’s chairman.[8]

The risk of Metro accidents and the cost of maintenance only increase as equipment ages. Yet ticket revenues are insufficient to cover the facility’s operating expense. According to former ECMMO head, Ali Fadaly, the Metro ran at a loss of $25 million in fiscal year 2013/2014.[9] Fadaly was replaced as Metro chief following the April 26 collision, as were managers of the maintenance and operations departments. But the issue of how to increase Metro revenue to meet costs was left unresolved.

State subsidies keep ticket prices low. In August 2014, ECMMO officials called attention to the fact that the real cost of a Metro ride was 9 Egyptian pounds ($1.18), and a higher ticket price would improve Metro service. These remarks inspired such widespread fears of a price hike that President Abdel Fattah el-Sisi made a point of announcing that the subsidies would continue owing to the “economic difficulties” of average Egyptians.[10] This January Minister of Transport Hani Dahi clarified that the total cost of a Metro ride is actually 25 Egyptian pounds ($3.28). The mere mention of a higher ticket cost triggered a wave of controversy, prompting the minister to issue a statement that reports of an imminent price hike were “rumors that target the country’s stability.”[11]

When the Metro first opened, Greater Cairo’s population was nudging the nine million mark and has since more than doubled. Three more lines are slated to be added by 2020 to connect the city’s desert sprawl; this will quadruple the number of daily passengers.[12] Additionally, an agreement to build Egypt’s first monorail at an estimated cost of $1.5 billion was recently signed between Canada’s Bombardier Inc. and Egypt’s Orascom Construction and Arab Contractors, both of which worked on various stages of the Metro. The 52 km line will connect the Metro to the satellite cities of October 6th and Sheikh Zayed west of the capital, an area whose development has lagged in part owing to a lack of public transport.[13]

Extended Metro coverage is considered a means of decreasing population pressure on Greater Cairo and of reducing the cost of Cairo’s traffic congestion in terms of health related issues and business and productivity losses—estimated to reach $3 billion annually by 2020.[14] More than a means of transport, the Metro touches every aspect of the city’s life and reflects the challenges facing both the capital and its administrators. Cairo’s unstoppable growth is like a fast-moving train. The ability to balance the volatile issue of public subsidies with expenditures for the Metro’s expansion and the cost of ensuring the safe operation of its existing lines may determine whether or not this megacity can stay on track.

[1] Caracas is the first, Delhi and La Paz the third and fourth. See: http://www.priceoftravel.com/595/public-transportation-prices-in-80-worldwide-cities/

[5] Between 1992 and 2012 over 800 passengers died and at least 536 were injured in train accidents nationwide. Zeinab el-Gundy and Mohamed Abdel Baky, “Deadly Train Accidents in Egypt, a Timeline,” Ahram Online, January 15, 2013, http://english.ahram.org.eg/NewsContent/1/64/62539/Egypt/Politics-/Deadly-train-accidents-in-Egypt-A-Timeline---.aspx.

[14] “What if the Problems of Traffic Congestion in Greater Cairo are Tackled?,” Egyptian Center for Economic Studies email bulletin, May 10, 2015.