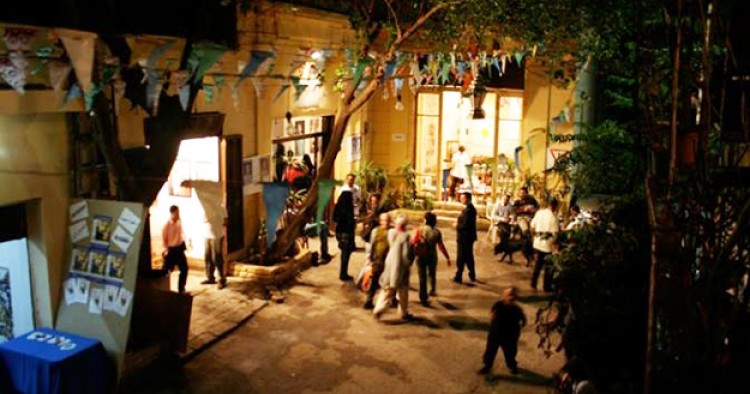 As the urban historian Lewis Mumford pointed out, “When a city has reached the megapolitan stage, it is plainly on the downward path: it needs a terrific exertion of social force to overcome the inertia, to alter the direction of the movement, to resist the immanent processes of disintegration.”[1]

Cairo, a megacity in an advanced stage of decline, experienced a demonstration of such force in January 2011, one whose outcomes continue to unfold. While political oppression and economic strife are well-recognized catalysts for revolution, there is a subtler agent of social transformation that has proved its regenerative power on a significant scale. Cairo’s Townhouse Gallery offers a prime example of how art and culture venues can instigate and nurture lasting change, revitalizing urban spaces and the communities they embrace while creating an atmosphere favorable to the growth of off-shoots.

Canadian expat William Wells, a longtime resident of Cairo, opened Townhouse in 1998 as an experimental arts space. The chosen location was the first floor of a gracefully decrepit century-old building in a quiet alley flanked by a girls’ school, warehouses (some abandoned, some serving as garages), several residential buildings, a smattering of tradesmen’s workshops, and the hulking rococo ruins of a nineteenth-century aristocrat’s palace.

From the outset, Townhouse promised something new. Less a traditional gallery than a launchpad for artistic projects, it was a place for encounters and, consequently, a valuable upgrade to the wasteland of downtown. Aside from the remnants of belle époque architecture, several cinemas, and three small but valiant independent art galleries,[2] there was little cultural activity to attract people to the historic city center, which was by then primarily known for its shoe stores.

Small gallery spaces mean limited exhibition and installation possibilities, a situation Wells remedied by expanding the gallery to two additional floors in 1999 and in 2000 leasing and refurbishing a neighboring warehouse dubbed “the factory.” On Saturdays, tables lined the factory space, spread with art supplies for anyone who wished to try their hand at drawing, painting, or collage. The so-called Sawa (“Together”) Workshops welcomed members of the Sudanese and Iraqi refugee communities in addition to children living or working in the neighborhood. A selection of the participants’ works was regularly exhibited in the gallery.

In 2000, Townhouse launched the 10-day Nitaq Festival, Cairo’s first independent cooperative arts event, involving local galleries, shops, and restaurants and featuring exhibitions, performances, concerts, lectures, and readings in a variety of settings, including abandoned or neglected historic buildings. In 2002, Townhouse hosted Egypt’s first annual event focused on the photographic arts, PhotoCairo, which itself inspired the 2004 foundation of the Cairo Image Collective, an initiative dedicated to “visual culture and artistic practice, engagement, and discourse.”[3] In 2006, another warehouse on the Townhouse lane was transformed into the Rawabet (“Links”) Theater, a performance space designed to forge connections between artists and audiences.[4]

Townhouse opened its doors at a time when the state exercised mind-numbing control over cultural venues and artistic output so that its establishment was tantamount to a political act. Within months of its opening, Townhouse was accused in the press by Fuad Selim, director of a state-owned gallery, of being a Zionist enterprise. The Ministry of Culture reacted not long after, forbidding its art school students from frequenting Townhouse; state security raided the premises and confiscated computers, claiming that the artworks shown in the gallery damaged Egypt’s image.

Over time the scare tactics died down, partly because so many independent art initiatives emerged in Townhouse’s wake that the state had a hard time keeping up with them all. More importantly, some young people who had interned at Townhouse moved on to Ministry of Culture positions, and artists from the independent movement were beginning to make their mark on the international scene. By 2008, Wells notes, Townhouse artists were being invited to participate in the state-run exhibition “Salon for Youth,” signaling acceptance of Townhouse’s staying power and achievements.[5] State security nonetheless kept Townhouse on its radar and at times interfered with its activities.

The effects of a venue like Townhouse are difficult to quantify but easily observed, both in the formation of like-minded initiatives and the direct effect on the neighborhood. Townhouse engaged local carpenters, glass cutters, mechanics, and welders as artisans to help create exhibitions while also participating as audience members. Townhouse has provided the basis for arts-related careers as well. Former employees like Mohammed Sharkawy (hired to set up and clean after the Sawa gatherings) and Ayman Ramadan (hired as a security guard) discovered their talents while working at the gallery and have since exhibited locally and internationally, including, in Ramadan’s case, at the Tate Modern and the New Museum in New York.[6]

The lane evolved from a garbage-strewn alley into a bohemian thoroughfare where all sorts of individuals, young and old, Egyptian and foreign, frequent the shows and café that now stretch along the length of the wall surrounding the old rococo palace. The wall itself has become an exhibition space, plastered with posters advertising arts-related activities citywide.

Rotterdam-based curator and author Nat Muller, who participated in a curator’s residency program at Townhouse from 2008-2009, notes that “social practice” is a fashionable term in contemporary art, but it doesn’t often succeed in making the boundaries between art institutions, the street, and other communities permeable. “Townhouse integrated [its] surroundings into the gallery…there is no clear boundary between [it and] the street,” she says.[7]

Townhouse extends such social practice by hosting research projects and other local, regional, and international institutions. Former Townhouse curator Sarah Rifky speaks about how Townhouse has contributed to “the ecology of Egypt’s art-scape.”[8] Rifky is now director of the recently opened Beirut Arts Center in Cairo, which, like Townhouse, engages with outside groups on questions concerning politics, economics, education, and the environment, in addition to the arts.[9]

The Uprisings: Shoring up Civil Society

The intersection between art and politics became vividly apparent as a result of Egypt’s 2011 uprising when, according to Wells, “a traditional arts programming model became functionally irrelevant.”[10] But Townhouse’s model of wide-ranging community outreach meant that it was perfectly positioned to attract, conduct, and refine the energy that was generated when that forceful moment of social change occurred. A two-minute walk from Tahrir Square, Townhouse served as a refuge for protestors in 2011 and during subsequent mass demonstrations.

“More than ever, the Townhouse Gallery understood the context it was operating in,” says artist Lara Baladi, who has exhibited in and collaborated with Townhouse throughout its history. “It instantly transformed the spaces into studios, conversation spaces, even hacking spaces, while exhibiting shows and performances that resonated with events unfolding on the ground.”

In 2012, “The Workshop Series” united artists, activists, students, lawyers, theoreticians, and civil society professionals to explore their newfound freedom of expression, to learn to present opinions and arguments, and to entertain opposing views—all essential skills for civil society participation. Negar Azimi, senior editor of Bidoun (“Without”), a Brooklyn-based arts and culture magazine focused on the Middle East, worked as a curatorial assistant at Townhouse for several years. She calls it “a rare laboratory and school…putting forward a conception of art that is dynamic, generous, and self-reflexive,” noting how “this generosity took on an even deeper resonance [after 2011] as young people were scrambling for places to meet and talk and plan.”[11]

In supporting the uprising and encouraging dialogue to explore its significance, the venue placed itself at odds with some of its neighbors, who reported these provocative activities. The police responded by briefly barricading the lane in the name of security. In downtown Cairo, as in communities and even within families throughout Egypt, people disagree over elections and other key issues. Yet in the face of economic difficulties, many have chosen to set aside differences and continue working together. Townhouse’s ties to the community have proven resilient. “We need each other,” said Wells.

Townhouse is often referred to as an institution, a pillar of the Egyptian arts community with a firm standing in the international one. But the concept of institution also carries negative connotations in Egypt, where most institutions are state-owned, ossified, and self-serving.

Artist Shady el-Noshokaty, who exhibited at Townhouse in its early years, feels that artists had limited options in that only two institutions supported them, “the government and Townhouse, and both failed to serve the needs of a large segment of local artists.” In Noshokaty’s view, Townhouse’s focus on interaction between the Egyptian and international arts scene came at the expense of the development of individual local artists.

Mohamed Allam, director of the Cairo nonprofit collective Medrar for Contemporary Art, acknowledges that Townhouse helps collectives and initiatives work together in an organic way. But he also says that Townhouse “has aged…the concept of institutions …is dying,”[12] implying that the venue has failed to evolve.

The critique surrounding Townhouse’s position in the Egypt’s arts community may be understood as further proof of the venue’s impact, as before Townhouse there was no standard by which to judge a community-based arts initiative.

Particularly in this transitional time in Egypt, as successive governments scramble to consolidate their power while citizens remain essentially voiceless, there is a need for alternative visions of leadership, for self-expression, and for group consensus as to what constitutes the common good and how it can be attained. Venues like Townhouse foster such discussions in a collaborative atmosphere, widening perspectives while providing the tools that can turn ideas into life-altering actions.

Moukhtar Kocache, a former Ford Foundation program officer in Cairo who has documented arts and culture initiatives throughout the Middle East, says that Townhouse has “shaped the perceptions, political values, and intellectual mindsets of an entire generation of Egyptian and regional cultural innovators.”[13]

Against a background of social and political change, the positive synergies born of the Townhouse endeavor are indeed flourishing, signaling the power of the arts to create a soft revolution that starts with individuals but resonates throughout societies.

[2] These are: the Mushrabia Gallery, founded by Stefania Angarano; Espace Karim Francis, named for its Egyptian owner; and the late Renata Jordan’s Cairo-Berlin Gallery.

[13] Author’s correspondence, March 2015. See also Kocache’s forthcoming paper outlining the role of arts and culture for social change in the Middle East, “Creation Out of Crisis, A Historic Moment to Leverage Arts and Culture’s Contribution to Social Change in the Arab Region,” commissioned by the Danish Centre for Culture and Development (CKU). It will appear on CKU’s website: http://www.cku.dk/en/.