Changing Cairo’s Spaces from the Bottom Up 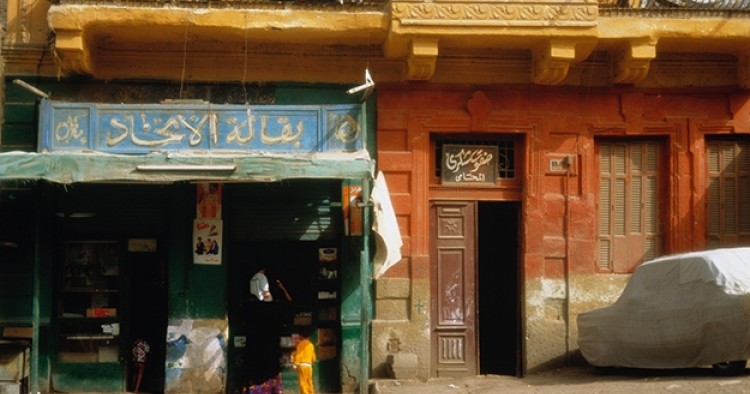 In mid-June, just before Ramadan, the pre-dawn calm of downtown Cairo was shattered by the sound of heavy machinery. The municipality had decided to repair the battered sidewalks, a fairly regular occurrence since shoddy concrete tiles are typically used for the job. Truckloads of sand were deposited at intervals along the main boulevards to be spread as a bed for the new tiles, while much of the rubble from the old ones was left piled by the curbs. To avoid the rough new terrain pedestrians took to the streets with the cars. Nearly two simmering summer months passed before all the sidewalks were repaved, at a time of year when Cairenes ordinarily flock downtown to shop, have an ice cream, or just stroll. Dismayed shop owners placed carpets or mats across the sand at their entries to encourage customers, but “business,” they agreed, was “not good.”

In Egypt, there is no dialogue between the people who manage public space and those who must live with their decisions. There is no real local government, only local administration officials ensuring that the decisions and laws handed down by the central state are enforced. But one of the outcomes of the 2011 uprising is that Egypt’s highly- centralized status quo is being challenged, including on the streets. Community-based interventions are shaping public spaces without the state’s prior permission or assistance, and thanks to a gathering consensus among independent urban planners, architects, and advocacy groups, the top-down approach to urban development is no longer viable.

The Cairo Lab for Urban Studies, Training and Environmental Research (CLUSTER), started in 2011 by architects Omar Nagati and Beth Stryker, is one of several organizations at the forefront of the effort to inform and unite concerned citizens and agencies around an agenda for urban policy change.[1] A first step was the creation of a network, represented in a bilingual, online directory mapping the location and activities of some 200 groups, businesses, arts venues, projects, and institutions addressing issues related to the urban environment.[2]

In the wake of the 2011 uprising, CLUSTER set out to identify “emerging patterns and potential innovations from the apparent [urban] chaos,” and in 2013 it produced a graphic-rich publication tracking changes in the cityscape.[3] Informal vendors occupied every available space, with sidewalk kiosks enlarging their territories using boxes of potato chips and soft drinks to delineate new boundaries. Beyond the city center, virtually uncharted informal quarters—vast unplanned, barely-serviced conglomerations of brick box towers—were growing denser and sprawling further into the desert and every available open space. Along the Ring Road, the highway that encircles central Cairo and cuts through many informal neighborhoods, citizen-led improvements could be found, including stairs carved into the road’s buttresses, roadside tea stands, microbus stops, and car and tire repair shops.

These types of public intervention began before 2011, but the subsequent lack of security brought bolder ones, including the community-built al-Mu‘tamidiya exit and entry ramps to the Ring Road. Area residents lacked access to the Ring Road, even though it dominates their neighborhood, passing at arm’s length from the windows of many homes. After 2011, community members decided to remedy a situation long ignored by the authorities, contributing money, materials, skills, and labor to build entry and access ramps connecting their neighborhood to the highway. In a signature act of “informal diplomacy,” residents presented a video documenting their project to the governor and police chief of Giza, inviting them to inaugurate (and implicitly take credit for) the new ramps, knowing this would grant the construction legal status, which it did.

In April 2013, CLUSTER organized a symposium entitled “Learning from Cairo” to explore alternative approaches to urban development, highlighting the needs and emerging role of average citizens. Says Nagati, “That conference could not have happened at another time. [It was] a moment of deconstruction and reconstruction, an opportunity to ask ‘what if?’”[4] A range of citizen-initiated and user-driven interventions presented at the conference illustrated the possibilities of bottom-up, participatory design.

One such intervention, by Madd (“flow”) Platform, established by architects Mohamed Aboterra and Ahmed Zaazaa in 2011, consisted of a one mile-long main street in a Giza settlement. Aboterra and Zaazaa, acting in the role of navigator between citizens, local authorities, and the state, worked with local residents to map the street’s usage patterns and arrive at a consensus of what was needed to make the space functional for everyone: pedestrians, drivers, shop owners, vendors, café operators, and public transport vehicles. The resulting design was presented to the authorities for approval and funds were released from an existing budget. The new street transformed the neighborhood in material and other ways.[5]

Cairo is not the only megacity where citizen-led interventions are providing livable solutions for situations in which the state’s efforts are absent or inadequate. From Delhi to Caracas, architects, planners, and designers agree that a paradigm shift in urban development is underway:

This rethink extends to universities, where the role of architecture and urban planning instructors, according to housing expert Yahia Shawkat, is “to make students more aware of the context in which they will be practicing and the social responsibility that comes with being a built environment practitioner.”[7]

Devising an inclusive “tactical and incremental approach” to influencing policy changes that support local, participatory development is one of the intentions behind CLUSTER’s upcoming “Creative City” conference scheduled for October 2015. Architects and designers can only act as mediators between communities and the authorities if they (and those they represent) possess knowledge of the state’s plans and laws, regulations, and budgetary issues governing them, information that is not always easily accessible.

The work of the Tadamun (“solidarity”) initiative, a joint project by Takween Integrated Community Development (Cairo) and the American University in Washington, D.C., is to raise Egyptian citizens’ awareness of their “right to the city” and arm them with the information necessary to legitimately oppose projects that may negatively impact their communities, challenge government plans, and present alternatives.[8] Tadamun’s online bilingual publications describe existing policies and draft laws, highlighting the virtual absence of local governance.

Egypt is one of the few countries where community council members, mayors, and governors are appointed, not elected.[9] There is no healthy competition among appointees, whereas elected officials would be judged by qualifications and performance. Without access to the political process on a community level, citizens cannot gain experience for higher administrative positions or hope to participate in decisions that answer their communities’ needs. Distanced from local realities, the state’s interventions appear arbitrary, wasteful, and inefficient, reflecting poorly on its image as administrator. The lack of local governance consequently weakens the political system as a whole.

As part of an effort to build a “more inclusive understanding of [Cairo],” Tadamun has documented a multitude of new neighborhoods where Egyptians are busy improvising houses, streets, and lives out of bricks, cement, steel rebars, and sheer will, almost faster than anyone can keep up with them.[10] It may in fact be impossible to know a city this size, or to fully fathom where it is headed. But if Cairo has a single, vital lesson to convey it is that the central state’s dictates governing everything from downtown sidewalk repair to village intersections have failed long ago, or rather succeeded only in creating what we see around us, which however valiant and resourceful is a terrible mess. Local self-governance is the key to rendering Egypt’s cities more livable. And with the lives of over 40 million city dwellers in the balance, it may determine this desert nation’s future.

[8] Tadamun, “Why Did the Revolution Stop at the Municipal Level?” http://www.tadamun.info/2013/06/23/why-did-the-revolution-stop-at-the-municipal-level/?lang=en#.VciNk7WWl3U. See also: www.takween-eg.com