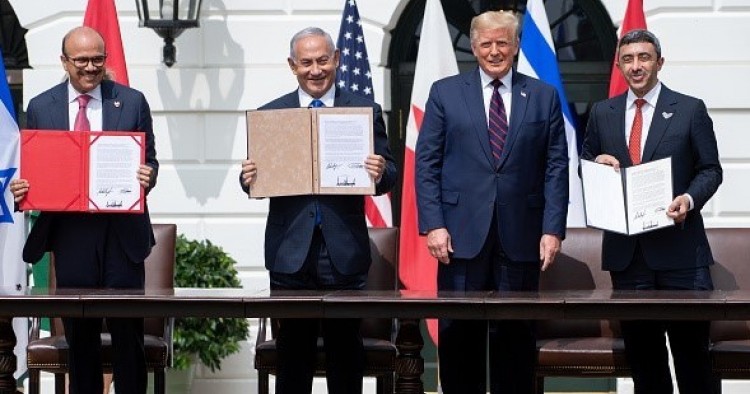 On September 15, President Trump presided over a ceremony on the South Lawn of the White House where Prime Minister Benjamin Netanyahu of Israel and the foreign ministers of the United Arab Emirates (UAE) and Bahrain, Abdullah bin Zayed Al Nahyan and Abdullatif Al Zayani, respectively, signed a general declaration of principles, called “The Abraham Accords.”[1] Numerous analysts have focused on the regional impact of the normalization of relations between Israel and these two Gulf Arab countries. However, this development has worldwide geopolitical implications — including for China.

A day after the agreement between Israel and the UAE was first made public, Chinese foreign ministry spokesman Zhao Lijian stated that Beijing was “pleased” to see the two countries taking steps to reduce tensions in the Middle East.[2] He also stated, “We hope the relevant parties can take concrete actions so that the Palestinian issue can return to the equal footed dialogue and negotiations,” adding that China intends to “play a constructive role” toward the achievement of a Palestinian state.[3]

This initial reaction is consistent with Beijing’s modus operandi of “balanced vagueness” regarding conflicts in the Middle East.[4] Such ambiguity has enabled China to maintain cordial relations with governments on all sides of geopolitical fault lines across the region and facilitated its development of extensive economic ties throughout the region. China’s support for the Palestinian cause has not prevented it from also being a friend and strategic business partner of Israel. Nor has Beijing’s growing partnership with Saudi Arabia and the UAE come at the expense of Sino-Iranian relations.

Chinese interests in the region are centered on the acquisition of natural resources and the advancement of the Belt and Road Initiative (BRI), which depends on regional stability. Put simply, if the agreements result in reduced conflict in the MENA region, China stands to gain immensely. But officials in Beijing share the concern of many analysts that the Abraham Accords will end up fueling polarization and radicalization in the region. If so, this will be at the expense of BRI’s future success.

China sees a continued opportunity for cooperation with the Israelis and Emiratis in the domains of technology and cybersecurity as a result of their formalized diplomatic relations. Given that the UAE has used Chinese surveillance technology and Beijing has demonstrated its interest in obtaining such technologies from both Israel and the UAE, it is not difficult to imagine the Chinese government benefitting from enhanced Emirati-Israeli trade in high technology and cybersecurity sectors. This is highly relevant to Beijing’s ongoing rollout of its Social Credit System and its advanced development of Artificial Intelligence (AI), in which it is planning to invest as much as $150 billion by the end of this decade.[5]

Another way in which China could see itself gaining from the Abraham Accords pertains to the balance of power in the Mediterranean Sea. Because Beijing views Turkey’s conduct in Libya as destabilizing (despite Beijing and Ankara both officially supporting the same government Libya’s civil war), the possibility of a more solidified Emirati-Israeli geopolitical partnership successfully countering Turkish ambitions there — and in the gas-rich eastern Mediterranean — could serve China’s interests in seeing Ankara return to its “strategic box” and curtail its “neo-Ottoman” foreign policy ambitions.[6]

However, when Iran-related considerations enter the picture, China has reason to be nervous. Beijing wants to deepen its diplomatic, economic, and military relations with Tehran, which the Israel-UAE agreement could make more difficult and riskier for the Chinese. The Trump administration’s decision to withdraw from the Joint Comprehensive Plan of Action (JCPOA) and apply “maximum pressure” on Iran in the form of sweeping and stringent sanctions, has negatively impacted Beijing. The sanctions have forced the Chinese to significantly reduce their purchase of Iranian oil; and their trade relations with Tehran have come under greater scrutiny. Beijing is concerned that the Israel-UAE agreement has implications for the regional order that could come at the Islamic Republic’s expense in ways that bode poorly for Sino-Iranian relations.[7]

If the leadership in Tehran feels increasingly threatened by a growing Gulf Arab-Israeli coalition, which also includes Bahrain and Saudi Arabia — despite the latter not having formalized diplomatic relations with Israel — Iran might feel pushed into a corner, which could result in Tehran acting even more provocatively in the region. Such a scenario could further dim prospects for long-term peace and stability in the Persian Gulf and wider MENA region.

Hamas in Gaza and other groups in the region could become more radicalized. Given Bahrain’s decision to follow in the UAE’s footsteps and normalize its own diplomatic relations with Israel, one interpretation is that Saudi Arabia (which joins the UAE in making all of Bahrain’s foreign policy decisions) is effectively abandoning the Arab Peace Initiative, which then-Saudi Crown Prince Abdullah proposed in 2002. There is already widespread anger among many Arabs and Muslims throughout the region about Bahrain and the UAE’s actions, and the risks of blowback are real. This raises concern about the potential eruption of new security crises in the region stemming from US-friendly Arab states having “betrayed” the Palestinians. Beijing understands the sensitivity of the Palestinian issue and is no doubt worried about how the UAE and Bahrain’s signing of the Abraham Accord may generate unintended consequences that further destabilize the MENA region.

A popular argument made by a wide range of analysts, including the Atlantic Council’s Ariel Cohen, is that the Israel-UAE deal was, at least in part, geared toward reasserting American hegemony in the MENA region and pushing back against Chinese and Russian clout in the region.[8]

All six GCC states, including the UAE, have operated within Washington’s orbit for decades. Yet throughout the 21st century, all of these monarchies have forged increasingly strong partnerships with China, playing their cards shrewdly to increase their perceived value to Beijing from a geographical, financial, and energy perspective. In anticipation of a post-US order, the Emiratis have diversified their investments in China and elsewhere in Asia. Israel has also been strengthening its relationship with Beijing in ways that have unsettled Washington, especially its close investment relationship with Chinese entities in the technology and military sectors.

In 2019, US lawmakers warned Israel against permitting China to operate the Port of Haifa, urging “the Government of Israel to consider the security implications of foreign investment in Israel.”[9] During US Secretary of State Pompeo’s May 2020 visit to Israel, the issue of Chinese investment in the Jewish state’s infrastructure was a central point of discussion. As a result of Pompeo’s pressure on Prime Minister Netanyahu, the Israeli government later rejected China’s bid to run the Shorek 2 desalination plant in Palmachin, the country’s largest desalination plant.[10] Such episodes illustrate Israel’s delicate position in a multipolar world being increasingly shaped by China’s geo-economic rise. Between China, which seeks to strengthen its diplomatic and economic ties to Israel, and pressure from Washington not to proceed with a deeper partnership with Beijing, the Israeli government finds itself closer to the epicenter of Sino-American competition for global geopolitical influence. Looking ahead, Dubai state-owned DP World and Israel’s Dover Tower are preparing a joint bid in the privatization of the Port of Haifa, where China has already made substantial investments. This will likely further contribute to some analysts’ belief that the Abraham Accords are designed to counter Beijing’s geo-economic power.[11]

There are many geopolitical dimensions to the Israel-UAE deal. On the regional level, these pertain to shared Emirati and Israeli perceptions of Iran, Turkey, and the Muslim Brotherhood as threats. Undoubtedly, Trump’s fierce re-election bid was also a factor motivating both Israel and the UAE to make the agreement. However, when considering why the Trump administration worked hard to broker the Abraham Accords, which even his Democratic foes in Congress welcomed, we should not forget Washington’s efforts to reinforce US primacy in the MENA region, consolidate its influence over two states that have served as close partners for many decades, and push back against a rising China in the region.

Beijing is under no pressure to act quickly or boldly in relation to the Abraham Accords. As is the case with countries throughout the world, China has yet to fully realize the implications of the agreements. Officials in Beijing will undoubtedly closely monitor how the Accords play out regionally. The Chinese leadership will do everything in its power to mitigate any perceived risk that the formalization of Israel’s relationship with Bahrain and UAE represents to Beijing, while also seeking to take full advantage of potential opportunities which the agreement may offer.

[1] For the full text of the Abaraham Accords and agreements between Israel and United Arab Emirates/Bahrain, see CNN, September 16, 2020, https://www.cnn.com/2020/09/15/politics/israel-uae-abraham-accords-documents/index.html.